Some of you know that I’m reading through Judges right now–and some of you are reading along with me, which is a real treat. Today I have just a short tale from Judges, starting in chapter 8.

Abimelech is one of the sons of Gideon (my very favorite story that Mrs. Bradley ever put up on the Good News Club Flannelgram). His mother is a concubine (a pattern we’ll keep seeing in Judges), and, on his father’s side, he has 70 brothers. He convinces his uncles that he should rule over them, arguing that it would be better if they were ruled by one man (him) rather than by 70 (his brothers), and they accept it. He then slaughters all of his brothers but one, thereby mostly eliminating competition for the legitimacy of his rule. His youngest brother escapes, only to deliver a curse on him and all those who have appointed him king. They’ve chosen, he tells them in a parable, to be ruled by a bramble bush rather than an olive or fig tree, and that will bring disaster. You can’t expect a man who cheated his way into power, destroying relationships and disrespecting his family, to be good leader.

Abimelech is a violent leader, always pushing for more power, even when it means harming his own, and he uses deception to win. In an effort to take the city of Shecham, he pushes through the city gates, slaughtering those behind its walls. He approaches a fortified tower where the last of the resistance has gathered, but, as he prepares to attack, a woman hurls a millstone from the top of the tower, injuring but not killing him. Recognizing that he is dying, he asks his armor-bearer to kill him with the young man’s own sword, lest, he worries, “lest men say of me, ‘A woman killed him.'” 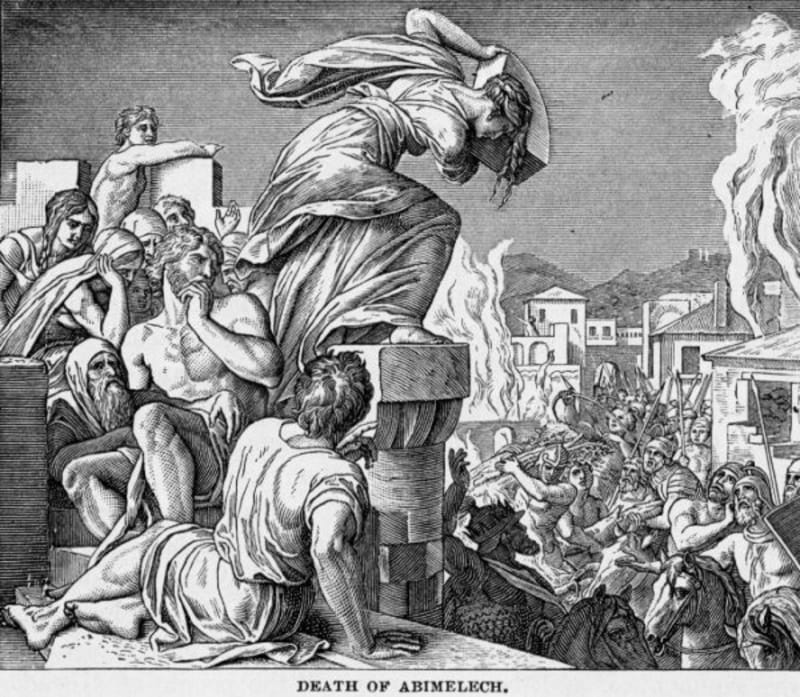 What do we learn here?