Judges: A Book for Our Times

Hi Sixoh6ers–I have an invitation for you.

I’m reading Judges now and will be in this book of the Hebrew Bible for a several months. In part, this is some prep work I’m doing for a summer speaking tour (Details soon!) about religion, race, nationalism, violence, sexuality, and gender. But it’s also a book that, I think, can yield a lot of insight for our moment.

I’ve written about the story of Jephthah’s daughter (Judges 11) before, for The Mennonite. Reading that story as a girl left me so shaken that it challenged me to rethink how I read Scripture more broadly. Here is the basic outline, from Judges 11-12:

Jephthah is a half-sibling to his some upstanding men, born of their father and a prostitute. He is brothers, the legitimate heirs in the family, drive him away, and he assembles around him a band of desert bandits. He’s smart and brave but hanging out with the wrong crowd. When the elders of Gilead see that he’s a natural leader, though, and ask him to help them defeat the Ammonites, who are oppressing them. He negotiates for something larger than a military position: he wants to be their permanent head. They agree. And that’s the deal: he will restore the honor he never had, rule over his brothers because of his manly skills in war and politics (not because of inheritance), and his future generations will be respectable people, not marauders.

He’s successful. He goes to battle and wins. But, along the way, he makes a rash promise: that he’ll sacrifice to God the first living thing that greets him upon his return. That turns out to be his only child, a daughter. 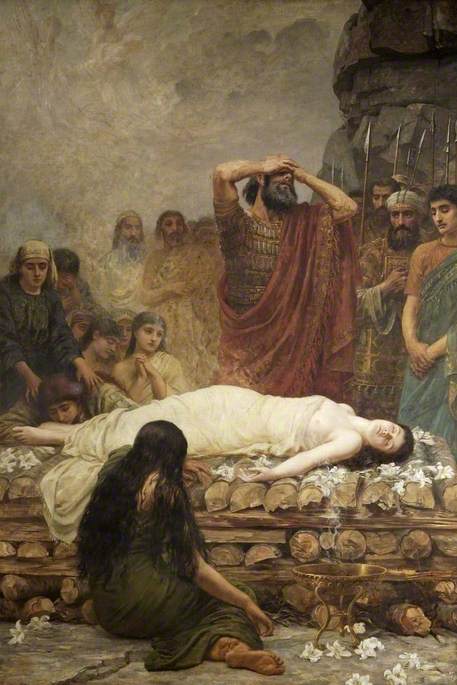 Above, Edwin Long’s depiction of the story shows a beautiful (and very white) dead woman wrapped in white cloth, laid out on a pile of wood that will become a pyre. She is surrounded by lamenting virgins, while Jephthah’s men stand to the side, solemnly holding their spears. Her father holds his head in his hands in agony. However could this situation have been avoided? How? If only there had been another option!

Obviously, this was upsetting to me. How could a man so carelessly trade his daughter for military victory, political power, and a restoration of his honor?

Well, I was a child, so I didn’t know how, but now I see it all the time. We’re sickened by adults who sell their children into slavery, especially sex slavery, but we trade our own daughters for political power.

Look at how Ford’s lawyer had to quit his job to take up her case because his own law firm didn’t want him to do it. What future clients might they lose if they came out on the side of survivors of sexual violence? Men will trade women to avoid losing power.

Look at Christine Blasey Ford’s father’s silence in her defense. No wonder she didn’t tell him about her assault. Believing him would mean he would have to stop playing golf with Brett Kavanaugh’s dad. Men, even fathers, won’t risk access to power by supporting their daughters.

Look at this woman in the GOP, as they explain on TV that we should expect girls to get assaulted. Mothers train their daughters to accept assault because they can’t risk challenging male power.

Look at Orrin Hatch, who is such a repugnant sexual miscreant that when he looked at Ford, all he saw was an “attractive” and “pleasing” woman. (What kind of man sees a woman recounting a sexual violent encounter and thinks, “That’s attractive” or “I am pleased by her”? A man who finds other people’s sexual humiliation titillating.)

Jephthah’s actions don’t really seem to upset anyone around him, which seemed so odd to me because so much of the Hebrew Bible was about condemning child sacrifice as a practice that distinguished God’s people from their military opponents. But those sacrifices were ritual; Jephthah’s was practical. He had to win his place he felt he should have always have had: as leader over his brothers. His concern wasn’t for his people (or else he could have volunteered to lead the military) but for his own power over other men. Sometimes, little girls have to die for that to happen, and everyone in his story, even her (maybe, maybe not, but the story is heard as if she does), accepted that as true, even if it was not.

Want to read Judges with me right now? There are no obligations to share your thoughts as you do, no reading guide or plan for conquering the book. But I’d love to have folks out there reading along with me. And if you do read it and want to share your insights, please do!