Humanity at the Center of the Story: Children’s Book Recommendations about Immigration

Sixoh6 has asked some of our favorite experts in children’s literature to suggest books to help children understand and engage tough issues. Today, we’re joined by one of the best teachers we know, Samantha Saltz. Here, she shares books about immigration.
If you have children in your life, consider adding one of these to your collection; if you don’t have children in your life, consider donating one to your local library, school library, little free library, or church library. Maybe even bring one to your upcoming back-to-school night to add to your child’s classroom collection! And if you have other titles that open up conversations about immigration for children, please share them!
—Rebecca
*****
Immigration is a topic that has saturated our everyday conversations. Children are exposed to the divisive words of adults and politicians about what immigration is and what kind of people immigrants are. With all of that weighing heavily on the minds of children, I have put together a list of books that bring humanity to the center of the immigrant story. These books address the complex narratives and perspectives of immigrants. It is my hope that these books are not only read in homes and classrooms but that each book can help generate conversations among all age groups and opinions.

We Are All Born Free: The Universal Declaration of Human Rights in Pictures by International Amnesty

On December 10, 1948, in response to the Second World War, the United Nations General Assembly signed the Universal Declaration of Human Rights. In this child-friendly version of the original document, each of the 30 Rights is presented in clear, concise language and illustrations students can relate to (ex. “We all have the right to life and to live in freedom and safety”). It not only grounds students in human dignity but offers a set of rules that students are able to understand.

One Green Apple by Eve Bunting

A beautiful story of a young Muslim immigrant named Farah and her transition into the United States. Being the new kid is tough, and Farah is aware of every difference between her old school and new one. Unsure of her own belonging in this space, she feels the frustration of knowing just as much as the other students yet not being able to communicate with them. The author illuminates the insecurities of learning a new language that many native English speakers have never experienced.

Friends from the Other Side/ Amigos Del Otro Ladoby Gloria Anzaldua

This bilingual book tells a story of a young Mexican American girl, Prietita, who befriends Joaquín, a boy who illegally crossed the Texas-Mexico border with his mother to find work. When Joaquín is bullied and called names, she bravely defends him. Later when Joaquín and his mother are threatened by border patrol, Prietita grapples with how to help her friend. This book offers a great perspective and should inspire conversations about what it means to be considered “illegal.” 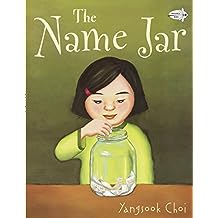 The Name Jar by Yangsook Choi

Unhei, an immigrant from Korea, is nervous that the American kids at her new school will not like her. Afraid to share her actual name, Unhei tries on various American names that her peers put into a name jar, but none seem to fit. When the name jar goes missing, her new friends encourage her to share her real name and she teaches them to pronounce it correctly. This book holds special meaning for me because both of my parents have non-American names. There is real sorrow in losing part of who you are in order to accommodate others. I hope this book encourages those who have lost their real names to reclaim them and for those who encounter a “foreign-sounding name” to have the patience to learn it.

A picture book that beautifully illustrates the travels of a father and daughter as they cross Central America toward the north. The words tell an innocent story through the eyes of the young girl and the illustrations convey a much heavier reality. This work offers a look into the trail of a migrant family constantly on the move, working for money to keep going forward and avoiding detention from soldiers.

My Name is Jorge: On Both Sides of the River by Jane Medina

A bilingual book of interconnected poetry written from Jorge’s perspective about leaving Mexico and acclimating to America. Each poem addresses issues of losing and maintaining your identity and culture. I love how the poetry perfectly encapsulates the emotions of Jorge’s transition into America. You feel anger, annoyance, sadness, hope, and so much more while reading, which makes this book especially accessible to all readers. Where experiences may differ, the feelings of inadequacy are painfully familiar.

A Different Pond by Thi Bui

A story of a family who immigrated from Vietnam and struggles of poverty they face in Minnesota. You see a father working tirelessly at multiple jobs to financially support his family. While local families fish for recreation, this family relies on the fish that are caught each morning for food; a bad day fishing means empty tummies. This book’s narrative is beautiful and poignant. At the end of the book, there is an affecting About Me section where both the author and illustrator share photos of their families.

Additionally, I have added a book for educators as a resource for teaching immigration in the classroom.

The Line Between Us by Bill Bigelow

This book is designed for middle school educators, but what it offers can speak to educators at every level. Inside its pages, you will find space to learn about the history of Mexican immigration and discover ideas to facilitate student learning.

Contributor Samantha Saltz is a first-grade teacher in Lawrence, Kansas. Originally from San Fernando, California, she holds a degree in Early Childhood and Elementary Education from Concordia University, Portland.

Did you find a great book in this list? Did Ms. Saltz just make your holiday gift-giving a little bit easier? Tell her “thank you” for her personal shopping services by making a donation to support her student’s learning.