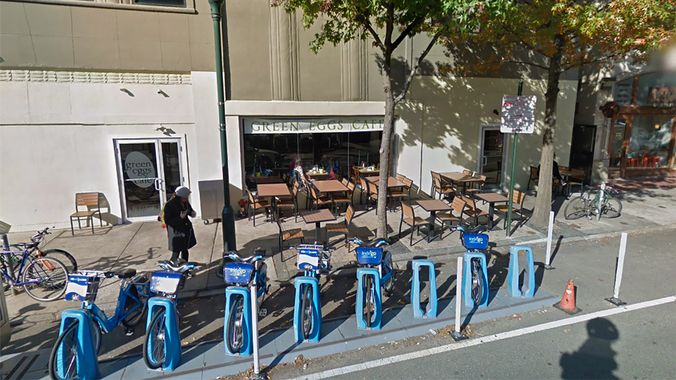 I took a little heat from friends a few weeks back when I suggested Maxine Waters’ call to “surround” Trump Administration officials might prove to cross a line.

If you’re intent on surrounding somebody with angry people, you’re going to make them fearful for their life. I’m not down with that. The congresswoman goes too far for my tastes.

Rebecca disagreed with me:

Black men and women, in particular, are frequently seen as angry, even when they’re not. When they are, they are seen as racist, no matter how justifiable their anger is.

Which is fair enough as far as it goes. But sometimes anger really is anger, and it really is threatening.

Which brings me to this story from my old stomping grounds in Philadelphia, where a pair of conservative activists were confronted over breakfast at Green Eggs Cafe this morning.

The pair being harassed was conservative commentators Candace Owens and Charlie Kirk, who were in Philadelphia for a board meeting of Turning Point USA, the pro-Trump youth organization they head.

In a video posted to Twitter by Owens, the protesters can be heard shouting: “They’re not Nazis, they’re soft fascists!,” “Fuck the bourgeoisie,” “Fuck white supremacy,” and “Cops and Klan, hand in hand.”

Unpleasant, but you might argue still well within bounds. Here, I think, is where events definitively crossed a line:

Local activist groups Abolish ICE Philly and Antifa Philly have not responded to Billy Penn’srequest for comment, but both organizations also posted photos of the Monday morning meleeon their respective Twitter accounts, depicting a liquid being thrown on Kirk (presumedly water flung by a protester)

Maybe we’ll find out the presumption is wrong, but having seen the video, it sure looks like the water flung at Kirk was thrown in malice.

I can hear objections already: “It’s just water!” No. Having an unknown fluid flung at you counts as assault in my books — it’s a violation of the person. Yes, it’s relatively minor as far as these things go. That’s why now is the time to draw lines: Before things get worse.

Which, ahem, is where I was trying to draw the line with Waters’ comments.

No? Then the whole event was what old-timers call a “circle jerk.”

If you think I’m overreacting, think about how — if you saw it — you reacted when you saw this video tweet from CNN’s Jim Acosta last week.

Those people are angry! Probably righteously so! I want to join their crusade and critique of US media!

Or did you think:

Me? I came down on the latter side. I’m guessing most of the people reading this did too. As I do with whomever threw water at Charlie Kirk this morning.

We have to live with the standards we apply to other people, or we’re just opportunists and hypocrites. That’s no less true no matter how convinced we are that we’re the good guys.

For now, at least, we still live in a country where you have to persuade people to go along with your ideas for them to have a chance to succeed. Mostly, we’re abandoning such quaint notions of democracy. We shouldn’t. Before we give ourselves license to keep going just a little bit further in the name of justice, we should pause and ask ourselves: Is this the right thing to do? And what supporters will I win to the cause. If the answers are “no” and “none,” it’s a bad idea.