“The Gift of Being Broken”

Today, we share a sermon by Ruth Harder, pastor of Rainbow Mennonite Church in Kansas City.  Pastor Harder generously shares her thoughts about Holy Week–and Good Friday in particular–in a piece about being broken, being in community, and art.

Thank you, Ruth, for these words.

Recently I asked my parents if I could have this chalice of theirs. “You know you can’t use it because of the crack, right?” “Yes,” I said. I still thought it had value.

We probably all know what it is like to hold something precious only to have it fall out of our grip and onto the floor. Shattered, sometimes repairable, sometimes not.

Holy Week invites us into these movements of holding something precious, experiencing the shattering, and then, sometimes much to our surprise, having something new arrive or be revived. We are invited into these movements within the life, death, and resurrection of Jesus and within the development of the early church, for they too knew what it was like to hold what they believed to be precious, only to have it shatter in front of them.  Then, much to the world’s surprise, they became a resurrected church, taking the shattered pieces, the body undone by violence, and reassembling a Body made for a different purpose—living toward a different purpose.

So with that introduction, I want to introduce you to someone that makes these movements of Jesus and Jesus’ followers feel very much alive and full of potential and vitality today.

Meet Nelia Kimbrough. Artist. Preacher. Social Activist. Poet. Teacher. Friend. The person who I invited to speak at my ordination.

For over ten years, starting in 2014, Nelia and her husband Calvin were volunteer residents at The Open Door Community (ODC) in Atlanta, GA, a Catholic Worker-style community on the margins of Atlanta. As one person put it, “The ODC’s charism and struggle was focused on living in deep, sincere relationship with those experiencing or facing homelessness, imprisonment, poverty, and execution, offering hospitality in the form of soup kitchens, showers, medical clinics, prison visitations, care packages for the condemned, and so much more.” Works of mercy and works of justice were practiced day in and day out for 35 years, alongside the imperative work of living into the trauma and pain of white supremacy, patriarchy and interracial strife.

Everyone who came in and out of their doors day after day had plenty to say and teach about the brokenness of the world, the ways we are undone and shattered by so much. There are also incredible stories and examples from the ODC experience of a community becoming redone, bodies reassembled, wholeness and renewal sought.

And I want to share one example of this. I mentioned Nelia is an artist, a visual poet and theologian.

In a phone interview with her recently, she said that when ODC  building was purchased 35 years ago, it came with a mirror that hung near the front door hallway. So when people came in for the soup kitchen, or for showers, or a change of clothes, they would often stop by the front door to look at themselves. And sometimes just the very act of seeing themselves in the mirror restored their belief they were a human being.

One day Nelia heard some commotion outside and a guy, who came for showers, was upset. He was often disrespected, perhaps because he was gay. They tried to bring him inside and help him calm down, but that didn’t work so they told him to come back another time. On his way out, he grabbed a ceramic coffee mug and threw it at the mirror and shattered the mirror. Soon people started to haul the broken glass out, but Nelia insisted that the broken, shattered mirror be kept. She didn’t know why exactly, but eventually the idea was born that they would use this broken glass, as well as all the broken pieces of dishes from their soup kitchen, to create a mural by the front door.

It was important to Nelia that a mirror be kept in the center, at eye level, so that people could remember their humanness as they came and went. So a new round mirror was gifted to the community by a long term volunteer.

And Nelia set out to begin this mural project, with others helping from time to time. Well, as is often the case, the projects we set out to complete get interrupted, our dreams of finishing shatters, things unravel. The work at ODC, Nelia told me, was often physically and mentally draining. And Nelia got stuck. She simply couldn’t work on the mural. So this project, this struggle stretched into a nine year project/struggle, and finally, it was finished in fall of 2013. 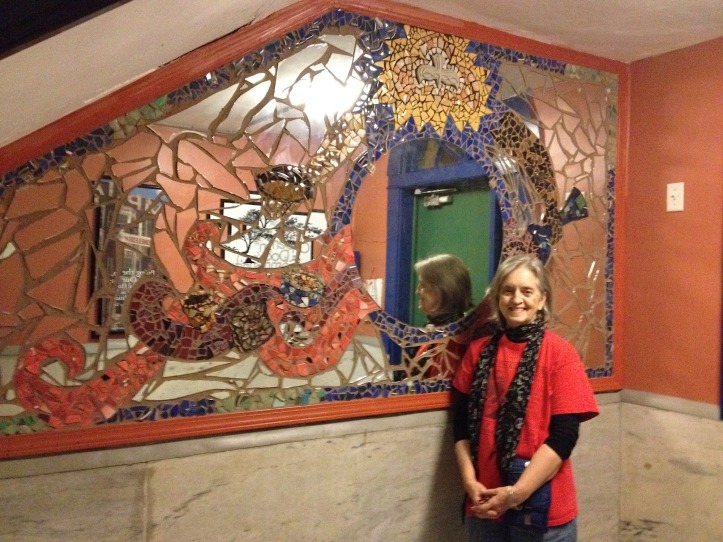 Above, Nelia Kimbrough stands in front of The Gift of Being Broken. The mosaic features a large circular mirror where passersby can see their fces. Above the mirror, a white dove descends over a yellow burst.

And how I wish I could end on this inspiring note and image. But as I said at the beginning, so often what we hold as precious shatters. Less than a year after Nelia finished this mural, The Open Door Community in Atlanta, 910 Ponce de Leon Avenue, was torn down, reduced to a pile of rubble that has been swept up and taken who knows where. The Open Door is no longer a hospitality oasis in the city of Atlanta. Last week, Nelia and her husband Calvin were in Atlanta and drove by ODC. Nelia reflects on the experience:

“I have thought about the sacred presence that has been poured into that plot of earth through the thousands of cups of unfinished coffee, the pee & poop left there when the public restroom wasn’t open and the energy infused in to the soil by the bodies that made a bed on the ground when there was nowhere else to sleep. No amount of scraping or digging will ever take that away.”

I want to read one more person’s reflection on this particular ending/shattering. To me it has gospel-sized implications. As Nathan Dorris said in a Facebook post recalling ODC:

“There are those, quick to comfort and with all good intention, who will say that Open Door still exists – primarily in the hearts, minds, spirits of the people…all those affected by its life and work, moved by its spirit; but also in the continuity of work carried on by former members of the community in other parts of Georgia or Baltimore, where a small enclave of refugees from Atlanta have settled to keep the fire lit. There is much to commend such a response; it’s true, all of it. But, at least for myself, there’s something more going on in this pain that I want to sit with for just a moment, a small whimper that I feel the need to be still and listen to. It is, I think, the pain of the destruction of a place that is a living presence of its own.

Countless hours of laughter were stored in those walls, absorbed from conversations between vast numbers of wildly diverse people. Atheists, Buddhists, Christians, Jews, Muslims; people of color, people of privilege, people of means, people of generational trauma and poverty. Anger, pain, rage, resentment–at class oppression, racial inequality, at our own failures to live into better ways of being together, our faults and shortcomings, at the bullshit of the local and national political machinery as well as the latest performance by the Atlanta Falcons–coursed through the veins of that place, stoking its passion and the passion of those who passed through for one, two, three nights, or a year, or five. Water runoff from showers offered and given freely to those who are often otherwise denied a place to wash themselves; coffee made with love poured out as libation upon the ground in the front yard. The thousands upon thousands of voices sharing their thoughts, feelings, singing loudly, poorly, earnestly, etching themselves into the leaves of the trees or the notches in the benches. Murals made of broken pottery, more beautiful than any I’ve seen in a museum, set into those walls like distinctive bends on the hands of a loved one.”

For me, this reflection, just like this communion mural, plunges us into the depths of Holy Week, especially Good Friday—a time when we are invited to sink into the broken realities impacting so many lives and places. The rubble, the shattered pieces crying out to be remembered, lives aching to remember, to reassemble a sense of belovedness.

We take this plunge into Good Friday as a community, as friends and followers of Jesus. We aren’t asked to walk this way all by our lonesome, but in the company of one another, hopefully nourished along the way until that Easter joy is finally, once and for all, experienced by all. The mural once again made complete.