Each year from Thanksgiving to Christmas, 606 offers up suggestions for books to tide you through the long winter nights. Pick them up at your library, buy them through your local bookstore, give them for a gift, or pick one up for yourself. We think that books are the best gifts. 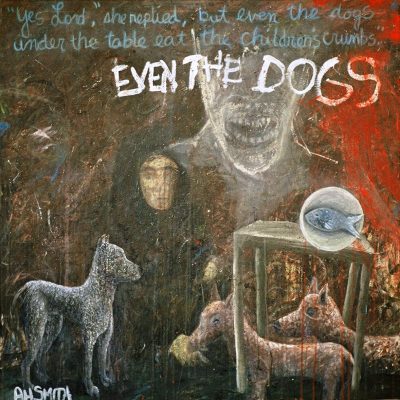 Faith of the Syro-Phoenician Woman by artist A. H. Smith. Support his work here.

Today’s suggestions are from my wishlist of books about race, racism, and combatting racism. Why? Because equality was the goal of the early church.

White Fragility: Why It’s So Hard to for White People to Talk about Racism by Robin DiAngelo with a forward by Michael Eric Dyson

Backlash: What Happens When We Talk Honestly about Racism in America by George Yancy

Uncensored: My Life and Uncomfortable Conversations at the Intersection of Black and White America by Zachary R. Wood is an argument for why we have to keep engaging in tough conversations, especially on college campuses.

My Brother Moochie: Regaining Dignity in the Face of Crime, Poverty, and Racism in the American South by Isaac J. Bailey

Futureface: A Family Mystery, an Epic Quest, and the Secret to Belonging by Alex Wagner is a first person account of one sociologist’s genealogical quest, which is informed by the larger question of why we care so much about “blood” and whether our time is well spent pursuing knowledge about it.

Roots Quest: Inside America’s Genealogy Boom by Jackie Hogan considers the spike in interest in genealogy as part of a broader concern about social change, including a sense of rootlessness that seems to afflict contemporary Americans.

Stand Your Ground: Black Bodies and the Justice of God by Kelly Brown Douglas, dean of the Episcopal Divinity School at Union Theological Seminary, interrogates America’s “stand your ground” culture and the harm it causes to African Americans.

Anti-Blackness and Christian Ethics, edited by Vincent W. Lloyd and Andrew Prevot is a collection of essays about how Christianity can oppose racism.