Creating a peace, justice, and faith campus ministry from scratch hasn’t been easy.

For quite some time there have been people at University Mennonite Church dreaming about an intentional living community as an alternative to campus housing or to the fraternity-style housing in our community. The idea has been present since the closing of United Campus Ministry’s house (UCM was an ecumenical campus ministry supported by University Mennonite Church) as a way to be providing students with a living experience unique to this area. We hoped that our unique faith-based peace and justice focus would appeal to a small group of students who would like to live together, learning and creating community as they shared that space. 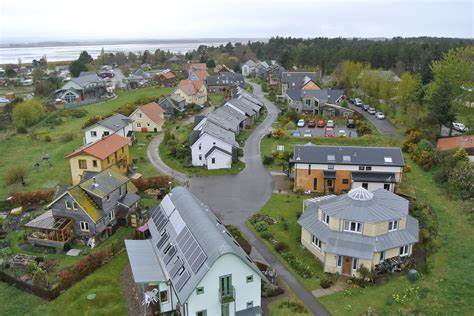 A view of the Findhorn Ecovillage in Scotland.

One of the main hurdles was finding a space to begin this project. We had two couples at UMC who were interested in possibly buying a property as an investment that could be used by 3rd Way Collective as it continued to take shape. Unfortunately because of zoning and corporate control, it was almost impossible to find a reasonably priced property that could house more than two or three students. Instead we decided to rent from a larger company with the hope that we could continue to search for a permanent home in the future.

Once we found a property, the next step was to find the students. Our publicity resulted in five students who did not know each other, but were willing to live together. This turned out to be a massive challenge that we weren’t quite prepared for. It was hard to find students who knew about 3rd Way Collective, and who had similar ideas for what the house could/should be.

Our group of five students included one who backed out weeks before the semester began, one who basically spent the school year closed off in their room, one who was a local organizer and rarely home, and two who ended up with such a significant interpersonal conflict that they had moved out before the fall was finished. We had made the assumption that putting five students together would instantly and organically create community that we could program around. Our fall schedule that year included home cooked meals at this new 3rd Way House. I showed up for the first of these scheduled meals to a darkened home with no students present. Rather than a sense of community, this house felt cold and lacking community.

We had also assumed that a hands-off approach would allow the residents to create their own community guidelines and parameters. Unfortunately this loose structure meant that when conflict arose their were not systems in place to handle the conflict. The tension that arise in the home was difficult to navigate because we didn’t have a process to move through this kind of conflict.

Before the end of our first year we had decided to end this experiment and close the house at the end of its first year.

This experience is easily one of the things I’m least proud of during the first five years of 3rd Way Collective, but that does not mean we didn’t learn some valuable things along the way. Here are a few of the things that we learned:

In the end I wish we had waited a few years before taking on this challenge, or perhaps putting more resources into making sure it started off on the right foot. I wish we had waited for students to come forward telling us that they wanted an intentional community, rather than assuming this was something the community needs (I still believe our community needs more alternatives to campus and fraternity housing, I just think the vision and expectations needs to be led by the students rather than people like me). Perhaps it would have been beneficial for my campus pastor role to be more intentionally present in the early moments of the house, helping the students to find ways to live well with each other.