Today, I’m following up to a question I was recently asked: If penal substitutionary atonement isn’t the only way for Christians to understand salvation, what else is there?

606 isn’t a theology blog, and I’m not a theologian or a church historian, so I approach this slowly and with a partial answer, focusing on two doctrines that better (I think) align with the peace and reconciliation work of the church (and thus ignoring ransom, satisfaction, moral government, and substitutionary theorie). The two views I share below are derived from Western theologies–I simply don’t know enough about the insights of African, African American, indigenous, Asian, and Latin American theologians on the matter. I welcome more contributions to the topic, so if you have found a soteriology (a doctrine of salvation) that you think is edifying, please share it.

What I share here is a very brief summary of two popular doctrines, simply to introduce them as concepts and remind readers that there are other ways of thinking about Jesus’ death that don’t require a valorization of violence.

Moral Influence (also called the Example Theory or the Socinian view, after a group of Polish unitarian Christians who adopted it): Jesus’ death is meant to show us God’s love and, in doing so, encourage us to love each other more. The focus isn’t on restoring a relationship between people and God but on helping us to act right in this life–“For you have been called for this purpose,” 1 Peter 2:21 states, “since Christian also suffered for you, leaving you an example for you to follow His steps.”  This view was first articulated by the medieval theologian Peter Abelard (yes, that Abelard) and continues to be popular among Unitarians.

Christus Victor (Christ the Victor): Jesus literally defeats death by resurrecting from the grave, then ascending to heaven. Christians share in this victory–not because Jesus’ suffering was due to our sins but because Jesus’ resurrection includes us. As 1 Corinthians 15:55-57 says, quoting Isaiah 25,

The sting of death is sin, and the power of sin is the law. But thanks be to God, who gives us the victory through our Lord Jesus Christ.

While many evangelicals are skeptical of the Christ the Victor model, it is central to Orthodoxy. 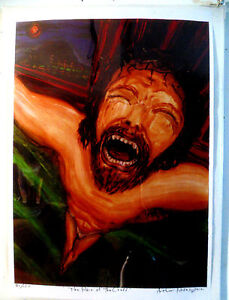 Above, Arthur Robins’ Jesus Christ Cross Crucified. For those who question violent atonement, the suffering of someone dying by state-inflicted torture isn’t a path to salvation.

Womanist and feminist theologians have tremendous insights into how we understand Jesus’ death, including calling into question the notion (so embedded in the white evangelical tradition) that Jesus’ death was required for human salvation, that it was a “happy exchange” (in Martin Luther’s words) in which Jesus took on human sin so humans could be redeemed. This evangelical vision, which requires reading Jesus into the Hebrew Scriptures, makes suffering and death inevitable and redemptive and obedience to them as noble–messages that have helped keep women and people of color locked into oppressive relationships. In a future post, I’ll get back to their contributions to new understandings of the execution of Jesus.

For me, leaving penal substitutionary atonement–the idea that Jesus has to die in order to settle a debt that I owe to God because of the sin that is inherent in my nature–behind meant I could more clearly understand Jesus’ life and ministry, because I was no longer reading it to explain justify a complicated, transactional, abuse-justifying theology. In response, I was better able to see Jesus in his own culture, social, political, and historical moment: that his ministry of reconciliation, healing, and justice was enough to get him killed. That it threatened to bring dangerous Roman attention to an already-oppressed Jewish community–which shows the ways that one oppression can lead to another. That what preceded his execution wasn’t Isaiah 53 but Matthew 21: 12-17. That Jesus died for our debts, not our sins.

For me, there were consequences in adopting this new theology, and all of them brought me closer, I think, to the heart of the gospel: reconciliation and healing, as modeled in Jesus’ life. Penal substitutionary atonement makes a lot of lazy Christians as adherents often interpret any demand on their behavior as an effort to undermine the meaning of Jesus’ death. The theology spiritualizes what is not spiritual–real human suffering, in this case, at the hands of state power–so that it can’t be acted upon. I don’t have time for it. If Christians are to be “about my Father’s business,” then I don’t think that penal substitutionary atonement can be what we’re about because it doesn’t get us acting like Jesus.