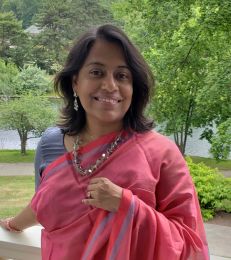 606 contributor Angela Muhuri is originally from Dhaka, Bangladesh. She now lives in Rhode Island with her husband, daughter, and mother. She is a graduate of Bethel College in Newton, Kansas. She attends church at First Baptist Church of America–the first Baptist church in the New World and a historic advocate of the separation of church and state.

I came to America in late-summer of 1992 when Bill Clinton’s first presidential run was barely heating up. Though I don’t remember if I heard the phrase “kitchen table issue” at that time, I’ve heard it during every election season since.

I am no longer the lonely international student staring at carts to see what Americans shop for at their local groceries. I have my own kitchen table with my own American family.

Picture this: An ordinary day. A family is preparing food together. It’s “A Lebanese Dinner” on the menu tonight. As it happens frequently, we have a guest. Our Australian friend, Mark, is staying with us this week. He is the main chef for tonight’s meal, and my husband Steve and I are happily following his instructions.

In the corner table, safe from knives and can openers, is my six-year-old daughter coloring as she stares intently at a lemon. She’s into her “coloring things as I see them” phase. She has a beautiful lemon slowly forming on her page titled “lamin”. When I ask her about the spelling, she says she’s sounding it out and that’s how it should be spelled. She’s a rather confident child, so I choose to leave it alone and wonder out loud if I should look for a summer art camp for her. Steve comments on how realistic the lemon is looking.

My daughter talks to us the whole time she’s coloring as children her age are prone to do. The subjects vary wildly and stories skip around from here to there. We’re hm-humming along just enough to let her know we’re listening as we go get some parsley from the garden, stir the hummus, and pour olive oil on the pita.

“We did our first “safe lock down drill” today at school today, mommy!”, she suddenly exclaims.

I stop. Actually everyone but my mom stops. She can’t quite follow her American-born granddaughter’s English as quickly as she’d like. She looks at my face to check what’s happening and then stops what she’s doing and quickly looks at my daughter.

I try hard not to overreact. I decide repeating her phrase is the safest thing for me to do. So I ask, “What’s a ‘safe lock down drill’, mama?” But she’s my daughter; she catches the quiver in my voice.

“Are you going to cry, mommy?”

“Oh, it’s when you stop what you’re doing in class because a stranger has come inside the school, the lights are all turned off, and you have to be quiet”.

“We have to stay together. And keep quiet. Even though it’s dark.”

(The dark part must be especially difficult for her. She’s always needed a bit of light.)

The hustle and bustle of five people in a small kitchen has stopped. I must say something or she’ll think she’s said something wrong. So I manage to mumble something about learning how to be safe is always a good thing. But the air in the kitchen has shifted and my daughter stares at me now. Her dad walks over and pats her on the head. I do the same but I don’t know how to comfort myself or her.

She doesn’t know that she needs comforting.

My mom starts to talk with me in rapid-fire Bangla. “Amrao kortam toh. Juddher shomoy.” (“We used to do that also. During the war.”)

I give her a stern look. In English I say, “Well, this is not during a war, ma. Steve and I have never lived through a war.”

Then I think to myself. Is that really true? Aren’t we at war? Aren’t our children at war? Haven’t we already started collecting heroes from students who lay down their lives to protect their classmates from bloodshed?  Doesn’t Columbine, or Newtown, or Parkland say we’re at war?

We have been at war for the past twenty-five years in America. And now my daughter is having to sit down with a bunch of frightened six-year-olds pretending to be brave in the dark.

I look at our Australian friend, somewhat embarrassed. They figured this thing out a long time ago. They must pity us Americans. Their leaders chose love of country over winning elections.

I feel defensive about our national blindspot.

On a recent Facebook post, I read a mom’s comment about how her son chooses his seat when he enters any classroom. He sits in the seat that he judges will be the safest to get away from a shooter.

That must make for an interesting dinner conversation in their family, I thought I as I read.

When the politicians campaign to earn my vote in the next election cycle, will they consider the kitchen table issue in my family? Or the many parents’ whose children either faced a drill or so much worse, went through the real ordeal? Millions of families have to confront the issue of gun violence in America every single day. When does that start to matter to our politicians? So far other than having my kindergartener face lock-down drills, have they done anything significant to prevent this national epidemic?

I’ll tell you what: This, on Mother’s Day and every other day, is this mommy’s #1 kitchen table issue.

And I bet I’m not the only one.