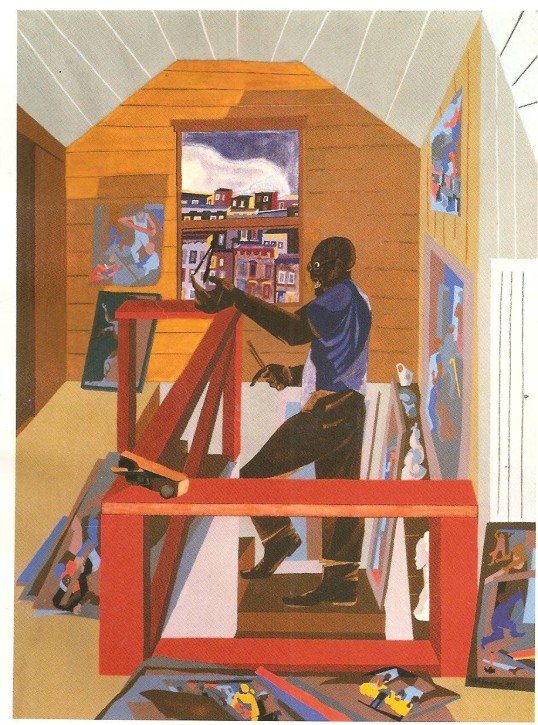 Why is there no Nobel Prize for art? Is the lingering Romantic perception of the visual artist—as crazy, self-involved, and sometimes even cruel, all in service to the authenticity of the artwork—a fair depiction of this type of professional? Or is it time to hear from artists themselves about the ethical and moral considerations, and level of integrity to their art, required to create meaningful artwork?

In her recent dissertation research (2018), I explore the visual artist as an alternative type of moral exemplar known as the “restored beautiful soul.”

Three ethical constructs make up the “individual factors” of the conceptual framework of the Masi Model of the Artist as Restored Beautiful Soul (MMARBS):

One of the six artists from the study, Jacob Lawrence, is explored in this post.

Jacob Lawrence was born on September 7, 1917 and spent most of his years in Harlem, New York. His father was a chef for the railroads, and his mother had to place him and his siblings in foster care so she could work. Lawrence demonstrated a keen early interest and aptitude for the arts that were shaped by the Depression and the urban and artistic community of Harlem. He was particularly encouraged by the sculptor Augusta Savage, who introduced him to the hiring board of the Federal Works Project (WPA).

Lawrence exhibited a driving and ambitious work ethic that defined his entire career. Although he never completed high school, he spent hours in the Schomburg library studying African-American history, which contributed to the evolving theme of early  heroes such as Harriet Tubman and John Brown. 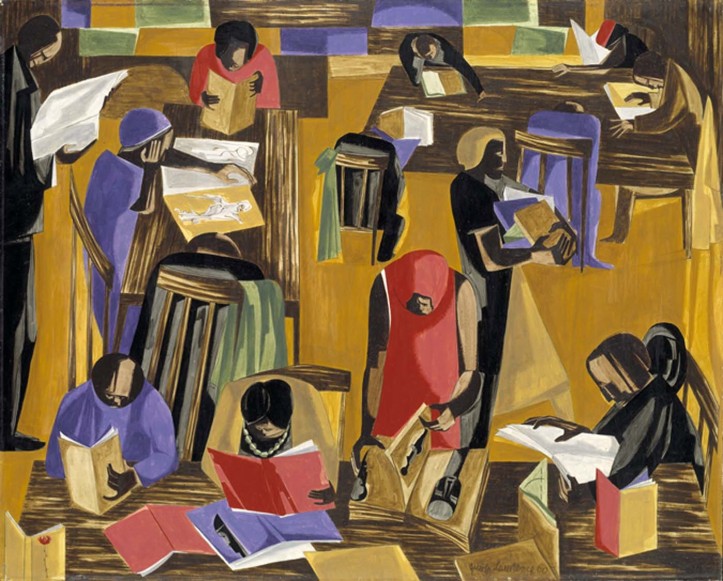 Lawrence was greatly influenced by his friendships with Ralph Ellison, Langston Hughes, and Richard Wright. Hughes commissioned Lawrence to illustrate his book One Way Ticket. It was during this period that he developed his unique style, which he described as “dynamic cubism of jagged compositions in bold flat colors” (Schjeldahl, 2015).

In 1941, he reached near overnight success at the age of twenty-four with his exhibition of The Migration Series with themes of homelessness, poverty, joblessness and the challenges faced by the traveling African American migrant from the south to the north. The sixty panels are split between the Phillips Collection in Washington D.C., and the Museum of Modern Art, New York (MOMA).

In 1946, he was invited to teach at Black Mountain College in North Carolina by the director of the College, artist Josef Albers. Through Albers, Lawrence studied the meaning of color, movement, and organic shapes and refined his approach to creating a three-dimensional form on a two-dimensional surface. In a letter he wrote to Albers in 1946, he states,

My belief is that it is most important for an artist to develop an approach and philosophy about life. If he has developed this philosophy he does not put paint on canvas, he puts himself on canvas. (Lawrence, 1946)

Lawrence was sometimes criticized by fellow African Americans for not expressing enough outrage and anger at the plight of his people. Having had the mixed blessing of being the “first” to exhibit, become part of, or interviewed by white artists, educators, and writers, he expressed a more positive and nuanced view of his work and personal experience being an African American artist:

I think any experience that evolves because of your ethnic background, and especially pertaining to the Negro, it’s been such a special kind of experience.

And since we as a people have not been integrated (we may never be), I don’t know, because of the physical difference…doesn’t mean that it’ll always be a negative thing but it cannot help but influence …my thinking and then my work and my whole being. (Lawrence 1968, p.19)

The Artist as Restored Beautiful Soul

One of the most compelling and challenging ethical characteristics of the moral exemplar is the ability to make the particular universal (Swearer, 2006). This means that through their action (writings, imagery, speeches, or other forms of communication), they are able to communicate their message to a very broad audience who can relate to the message. This occurs even if the work depicts a singular struggle. Many artists and writers can communicate in an autobiographical manner, voicing views and opinions based on their personal experiences. However, it is a rare individual who can take personal experiences and make them relevant in a universal message. This ability to universalize largely explains why Lawrence is such an acclaimed artist. He was able to take the “Negro struggle” and, through his choice of media, message, and experiences, transcend race and thereby open his viewers’ hearts and minds to a universal human struggle in us all.

1. The Good: Reflection on Creative Process

Lawrence speaks of his belief that simpler the form, the more powerful the message. Due to his semi-abstracted compositions and color palette, his challenging subject matter was more widely accepted, admired, and viewed. Style and color have much to do with his popularity and ability to transcend difficult subject matter. 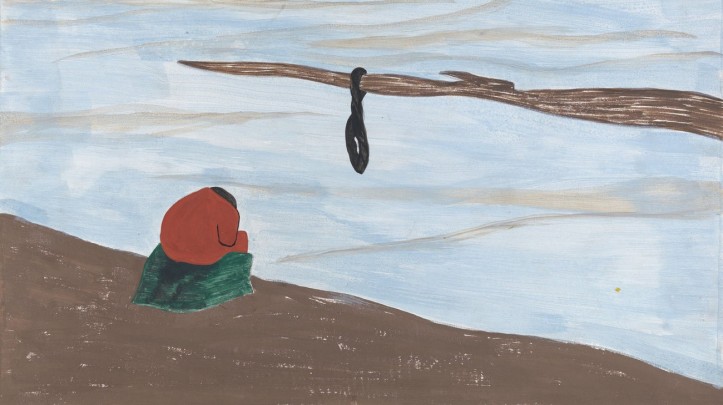 It was found that where there had been a lynching, the people were reluctant to leave (Lawrence, in Wheat, p. 287).

Lawrence had a very early dedication to becoming an artist during a time when there no African Americans prominent in the art world. He speaks of being greatly influenced by his upbringing as well as the artists, writers, and musicians in the Harlem arts community.

Lawrence always portrayed ethical themes in his art work, which is considered a form of moral action and can best be described as social realist or social commentary. His work was rarely decorative or simply created for pleasure. He believed in art always having a message, and his message was the human struggle.

Lawrence was a committed activist. He devoted his entire life to rendering the African-American struggle in art, and through his decisions about how to present his work, widened not only his audience but also the dialogue between white and black communities.

Lawrence’s use of storytelling and captions offers viewers accessible as well as multi-modal ways (i.e., writing and imagery) to experience very difficult subject matter. Although he worked abstractly, his choice of colors, flattened features, and forms helped to de-personalize the subject, creating some distance from the more horrific nature of the events, so that his message could be understood and experienced by the widest possible range of viewers.

Given his level of success, Lawrence also took the unusual step of dedicating himself to teaching young artists, another characteristic of the ethical exemplar. Many successful artists may do an occasional stint as a visiting artist or conduct workshops; however, Lawrence taught consistently in institutions of higher education, which meant his teaching responsibilities and workload were those of a full-time professor.

Jacob Lawrence was considered the first African American visual artist. He came into prominence at an important point for the black American when various forms of incredible injustice were finally becoming into fuller public awareness. The courage he exhibited was formidable in his efforts to chronicle the “Negro struggle” at an early age  and provided an essential way to bring these injustices to light. Over the decades in which he worked, his commitment to the theme of struggle never wavered.  He began his career interested in conveying the struggle of one group; however, his ability to take this struggle and make it universal defined him as a restored beautiful soul. 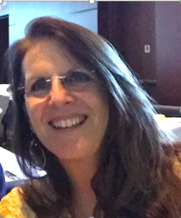 I am a practicing visual artist and Professor of Art Foundations with the Art Institute of Pittsburgh Online Division where I teach studio and digital art, ethics, and aesthetics courses. This post reflects part of my dissertation research: The Restoration of the Beautiful Soul Ideal in the Lives and Works of Six Visual Artists (Käthe Kollwitz, Wassily Kandinsky, Jacob Lawrence, Mark Rothko, Vincent van Gogh, Remedios Varo), (Masi, 2018: Boston University). Feel free to email me.