Rise in Hate Violence has been a Long Time Coming

I’ve been working in the field of hate studies for more than a decade now. As part of that work, I served as part of a 3 year grant from the National Institute of Justice (the research arm of the Department of Justice) to study domestic extremism. The grant spanned the Obama and Trump years. Our purpose was to study online extremism related to domestic extremism and terrorism.

Our grant team was just one of many working on the issue of terrorism in the US, but we most teams focused on the threat that radical Islamic terrorism presented to the US. Worldwide, radical Islamic terrorism has presented the greatest terroristic threat, though rising anti-Semitism and white nationalism in Europe is also a concern. In the US, though, it is domestic extremism that, since 9/11, has presented the greatest terrorist threat to the US. That overwhelmingly takes the form of rightwing movements, mostly white supremacy movements, though Sovereign Citizens and anti-abortion groups present their own threats. Yet, even during the Obama years, this is not where we gave our attention. Indeed, in a conference hotel ballroom of researchers working with the NIJ, DOJ, and Homeland Security, our team of researchers were some of the few working on domestic extremism; even fewer of us were working on religion in domestic extremism.

Now, nearly after the grant has ended, here is where we are: every day, more news of rising hate and danger from domestic extremists. This morning in San Antonio, a sign proclaiming “Fake News” and “MAGA” showed up outside of the city’s Holocaust museum. 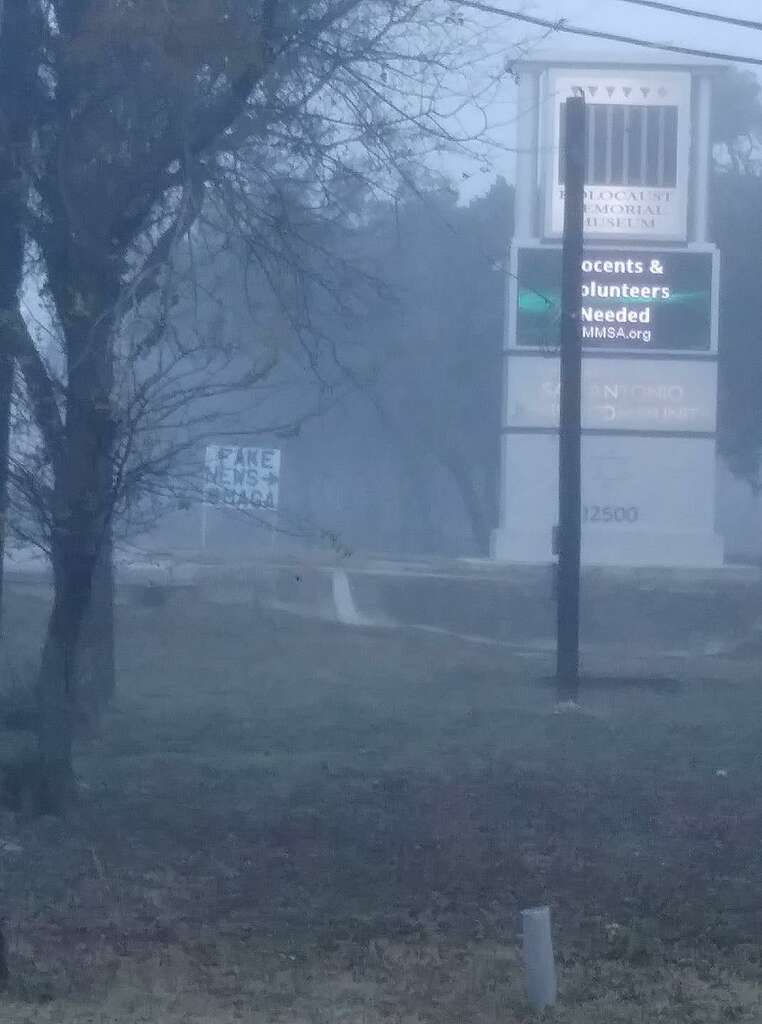 The Trump administration’s emboldening of white supremacists is the natural next step in the Republican party’s long-term alliance with people who are hateful.

Charles S. Pierce has a fantastic piece in Esquire this week about the relationship between the GOP and the rise of Trumpian hate–and mainstream media complicity in it. (I would add to that scholarly and university complicity. This stuff has been showing up in our research for a long time now, but too many scholars are fearful of… I don’t know what. Maybe looking radical?) He writes:

[T]here were those of “us” who saw where this had been heading for 30-odd years and who are not surprised at all that the current president* was its inevitable product, and “we” also take seriously his statement on Wednesday that, if he is impeached, “the people will revolt.” He wants them to do so—his people, anyway. “We” shouldn’t be shocked at all by this.

Pierce specifically cites a 2009 Homeland Security report that identified domestic extremism as a major terroristic threat. John Boehner, Speaker of the House at the time, was rather hurt by it, saying that DHS needed to focus on Islamic terrorists, not Americans who had a difference of political opinions. Conservative media repeated the idea that DHS had broadened its definition of terrorism in order to harass right-leaning organizations. (Right-wing persecution complex is pretty strong–and ironic considering that the author of the reportauthor of the report was a stalwart Republican, and many, many people who work on terrorism are conservatives.)

Boehner was trying to win political points by telling the people at greater risk of recruitment into extremist organizations–white people, military veterans, conservative Christians–that their government thought they were dangers. Organizations like Family Research Council (the lobby arm of Focus on the Family) sent out information warning their supporters that those with a “Christian Identity” were seen as threats to national security–totally ignoring the fact that “Christian Identity” is a race-based religious movement that preaches that Jews are the literal spawn of Satan and Eve and that people of color lack souls. Instead, FRC pretended that DHS was attacking people who identified as Christians. Backlash to the report was used to agitate conservative voters who always see themselves as on the verge of being driven underground by an imaginary socialistic government. A weak-willed DHS retracted the report and dismantled the research unit.

We don’t know what was lost–and how many lives have been lost–because of this rightwing attack on research on terrorism. What we can’t say, though, is that we didn’t know it was coming.