No, we’re not a nation of immigrants 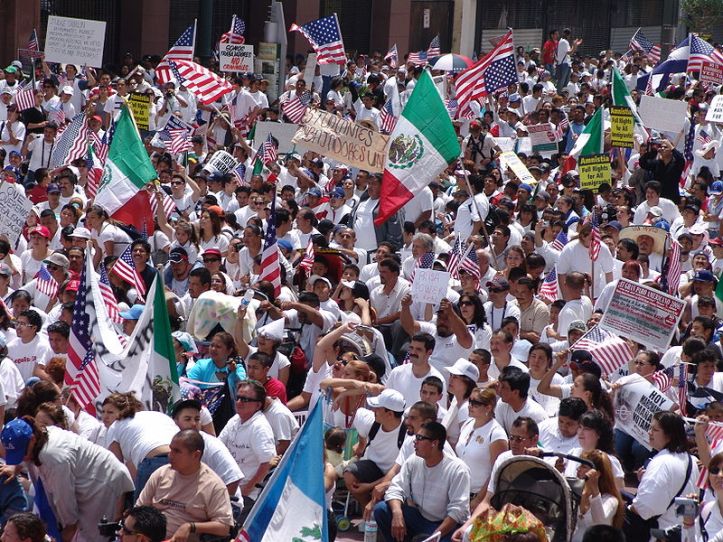 Are we a nation of immigrants?

It’s something we on the left like to say as the immigration debate continues. It’s a way of trying to bring the debate in focus, a way of reminding folks that — unless your heritage is purely Native American — your family tree probably originates on some other continent. So don’t be such a goddamned hypocrite.

There’s pushback to that notion, though, from both the left and the right.

On the left, that pushback comes mostly from African Americans — who note, reasonably, that their ancestors didn’t migrate: They were kidnapped, stolen, and brought across the ocean. “Immigration” is far too anodyne a term to match that experience.

On the right, the objection is different. We’re not a nation of immigrants, they say, but a nation of settlers who can decide when or when not to admit immigrants. Here’s a version of that argument, and let’s see if you can spot where it’s problematic:

Before America was a nation, it had to be settled and founded. As Michael Anton reiterated in response to New York Times columnist Bret Stephens: America is a nation of settlers, not a nation of immigrants. In that, Anton is echoing Samuel Huntington, who showed that America is a society of settlers. Those settlers in the 17th and 18th centuries—more than anyone else after—had the most profound and lasting impact on American culture, institutions, historical development, and identity. American began in the 1600s—not 1874—and what followed in the 1770s and 1780s was rooted in the founded society of those settlers.

“The most important fact to keep in mind when studying political changes in America is that the United States is a product of a settler society,” writes historian J. Rogers Hollingsworth.

Settlers, Anton explains, travel from an existing society into the wilderness to build a society ex nihilo. Settlers travel in groups that either implicitly or explicitly agree to a social compact. Settlers, unlike immigrants, go abroad with the intention of creating a new community away from the mother country.

How about the estimated 2.1 million to 18 million Native Americans who are believed to have lived in what is now the United States in 1800? “Ex nihlio” is Latin, doncha know, for “out of nothing.” The continent was, in this telling, a blank slate — or close enough to it. The idea of America as a “nation of settlers” is, frankly, white supremacist, because it treats the people who were here as not having interests in the land — or their own preservation, frankly — worth noting.

I realize that I sound like a typical lefty griping about what happened more than a hundred years ago. Can’t be helped. Our founding character is an important part of our national self-image, and that in turn influences the way we hold these debates, and the decisions we make. Sometimes a little myth-making is good — conceiving ourselves as a nation of liberty has, over time, forced us to move ever more (if too slowly) in that direction. But myths that overlook the existence of millions of people do not serve us well, I think. And some people who exalt those invaders start from the premise of celebrating them, then do the moral engineering backwards from there.

So what are we?

Taken together, we’re not really one thing or another, maybe: We’re a nation of invaders, murderers, and thieves … and kidnapping and theft victims … and yes, even a few immigrants.

And that doesn’t even really capture it. With some exceptions, none of us quite belong on that list, either. We are heirs, mostly, to the invaders, immigrants, and the conquered — in many cases, heirs to all three groups. Many of us would like to tell the story of our inheritance in positive terms: It forces us into moral gymnastics we’d never accept in other circumstances.

This is not to create a guilt trip. But it should influence the decisions we collectively make about who belongs here. Many among us believe that inheritance gives us rights and power over the land. Some of us believe the inheritance creates obligations. I’m in the latter group.