I suggested previously that white supremacists couch their arguments in love of their own rather than hate for others. However, this doesn’t last. What makes a hate group a hate group is, definitionally, that they denigrate others based on social characteristics, such as race or sex or sexuality or disability. How do white supremacists jump from loving “your own kind” to hating others? Can we interrupt that jump through acts of friendship?

The set-up is there in every speech and YouTube video they produce. It is in the coded language that I fear many potential recruits simply don’t recognize urban blight for African American people, global elite for Jew. But someone always picks it up in the comments section. Someone with less finesse than folks like Ben Shapiro pipes up and just says it: Jews will not replace us isn’t just about ensuring that white people have a place in the world; it means doing so at the expense of Jews. Or African Americans, or immigrants, or Muslims. The comments sections, I fear, don’t lie. Our Google searches don’t lie.

So, what do we do about this? I want to offer only one suggestion here, from a source I don’t usually love: St. Paul.

In the book of Acts, Paul enters cosmopolitan Athens and sees altars and statues dedicated to deities from all over the known world—plus one altar “to an unknown God.” Some theologians argue that this wasn’t so much a single deity but a placeholder—a recognition among the Greeks that there were more deities out there who should be respected. Because, the writer of Acts tells us, the people of the city “would spend their time in nothing but telling or hearing something new” (which reminds me very much of the chatter you see on “racial realist” websites), Paul is invited to speak in front of the Areopagus, an outcropping near the Acropolis where public debates occurred. And though the polytheism of the city was offensive to Paul as both a Jew and a follower of Jesus, he does not begin with correction but with affirmation:

Athenians, I see how extremely religious you are in every way.  For as I went through the city and looked carefully at the objects of your worship, I found among them an altar with the inscription, “To an unknown god.” What therefore you worship as unknown, this I proclaim to you.

Then, in lovely use of language that was probably not lost on his listeners, Paul teaches them that their unknown god is the God whose name could not be known–the I AM Moses encountered, the unspeakable name of Yahweh. They were searching all along in the right direction and didn’t even know it!

In other words, Paul affirms what they love—religion, worship, relationships between humans and the divine. These things, says Paul, are exactly what they should be loving! In fact, what the Athenians are doing is exactly what God also loves, for God instilled in all people a desire to “search for God and perhaps grope for him and find him—though indeed he is not far from each one of us.” Then Paul ends his speech by quoting their own beloved poets Epimenides and Aratus back to them, saying, “For ‘In him we live and move and have our being’; as even some of your own poets have said.”

St. Paul and I often disagree, but here I try to follow Paul’s teaching advice: begin by affirming the desire to know, the value of argument (which is often the form that these conversations take), admiration for truth-seeking, and, as much as honestly possible, affirmation of the things that the haters say they love: their neighbors, their families, the concept of “family,” their nation, the concept of “nation,” the masterpieces of the Western tradition, their faith.

[This is also, incidentally, how I teach my children to address accusations from their peers that my children hate God because they don’t say the pledge. We pretend we are Paul going to Athens, and we begin with, I’m so glad that you love God! I’m glad that you care that I love God too!)

We start there because people who end up making hateful arguments begin with love. Their self-perception isn’t of a hateful person but of a loving one—and a brave one, for he is risking being called hateful, all for his love. 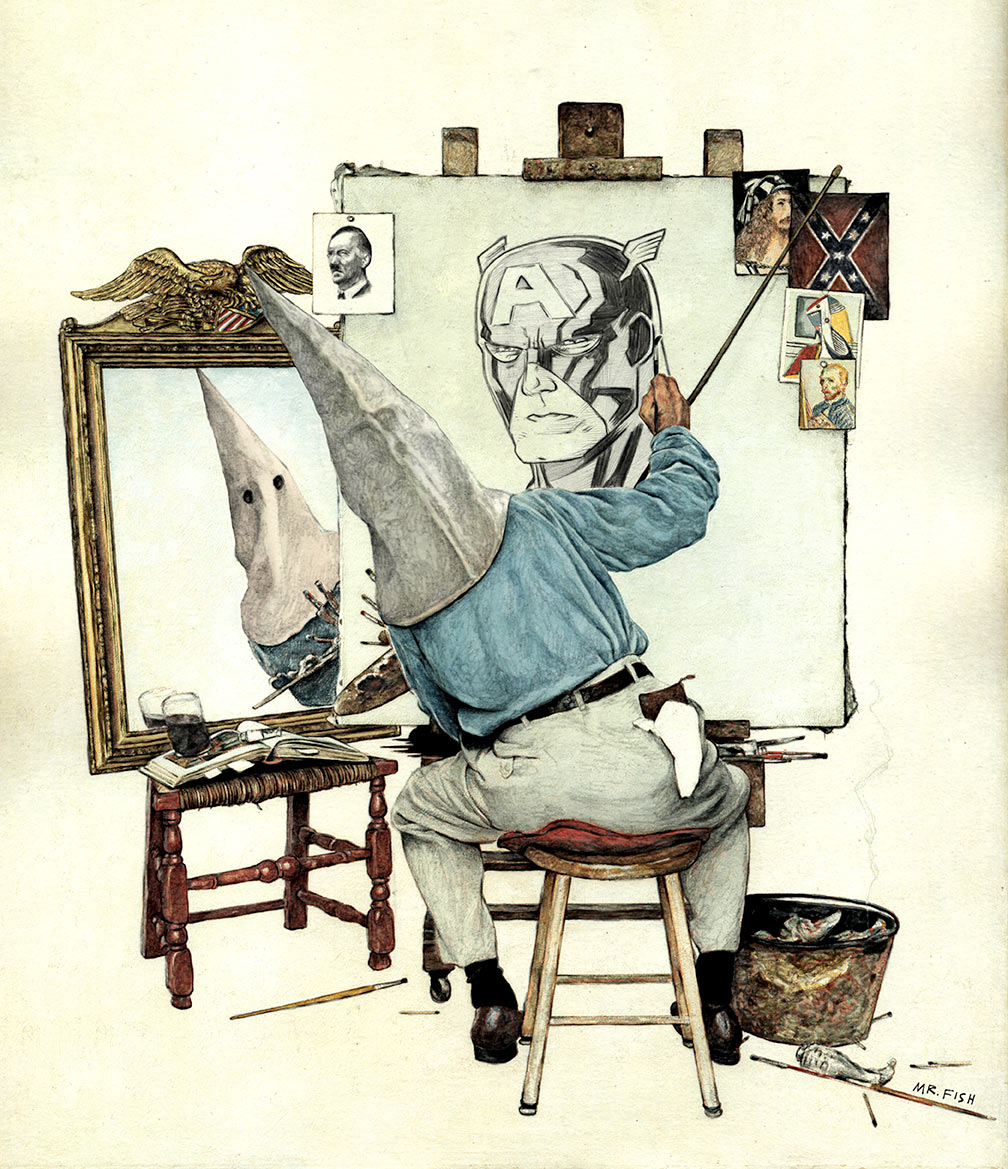 Haters don’t start by seeing themselves as villians but as heroes. Above, artwork by Mr. Fish, drawing from Norman Rockwell and John Amor. In the image, an artist is crafting a self-portrait. He looks in the mirror, where we see a man wearing a Klansman’s hood. On his canvas, he paints Captain America.

My job as an educator (which is to say that this might not be your job and it is not the job of every educator) is it to engage people critically in their claims of love, to help them untangle what love means and examine how it motivates destructive behaviors.  That untangling work requires listening and challenging students to reflect on their own words, helping them to identify where and why love and hate are intertwined, asking them to consider how this love shapes their identities and what conclusions other than hate their love might lead them toward.