Politics, again, is the art of the possible. One thing that’s not possible in the short-term? Large-scale disarmament of American society. Conservative writer David French, I think, gets at the dynamic here: 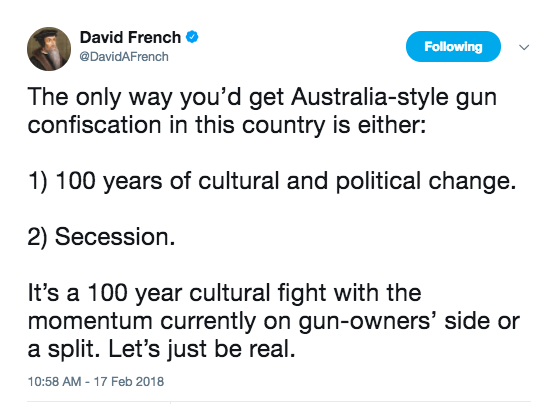 I think that’s right. It’s either going to take forever or the destruction of society to achieve disarmament to any great degree. Let’s assume the latter will be a destructive process to be avoided, and I think  it’s fair to say we don’t want to watch children die for 100 years before we start to save them.

It’s time for conservatives to present a plan. The ball is 100 percent in their court.

Why do I say this? Because American liberals have offered a number of ideas over the years to address the problem. They’ve been roundly rejected.

Require the reporting of stolen or missing guns? Nope.

Conservatives have talked about beefing up mental health care in this country, and while there’s reason to believe that would be insufficient, I suspect a lot of liberals would be on board anyway. Only problem is: Nothing ever happens.

(It is rather amazing that we’ve had a series of school massacres over the last 20 years and done, essentially, nothing to try to stop it. There’s no other area of life where the routine slaughter of children — something *everybody* agrees is bad — would elicit so little action.)

So. Republicans hold the presidency and Congress. They control most of  the state governments. If there’s action to be taken, it’s incumbent on them to take it. (French,  to his credit, has offered one idea.)

Instead of debating guns versus anti-gun, let’s focus on the art of the possible. We need to challenge conservatives: “OK, we know you believe in an expansive reading of the Second Amendment. Fine. Tell us what solution you can offer, instead, to the problem of mass shootings — and give us a timeline for implementing that solution.”

Liberals, in turn, should be willing to say “yes” to almost anything that conservatives come up with along these lines. (Almost. There are exceptions.) And we shouldn’t let perfect be the enemy of the good. But ultimately, it’s not our responsibility.

Liberals have offered their vision for reducing massacres in this country. It’s not going to happen. It’s time to hold conservatives to account — you can be for the Second Amendment and still be more vigorous in tackling this problem. What are you going to do about it? When? Act, or stand aside.

Time for the GOP to act.