The immorality of Trumpist immigration enforcement comes home to Lawrence, Kan.: The arrest of Sayed Jamal

The federal government is about to destroy a family in my town over what, as best I can tell, was a paperwork mixup.

Syed Jamal, who has lived here more than 30 years, who has three American-born children — he applied for an open spot on the school board last year — but has no criminal record, was arrested by ICE this week and seems likely to be deported to his native Bangladesh.

The Lawrence Journal-World notes: “America is the only country Jamal’s three children have ever known. But, having overstayed his visa and having failed to leave the country voluntarily, the Bangladeshi-born Lawrence father is now jailed and facing deportation.”

Given what we know now, it seems that Jamal is being deported because his visa lapsed. And I imagine some of my conservative friends will say: “He shouldn’t have let his visa lapse, then.”

I say: Let the punishment fit the crime, then. Let he who never paid a late fee on his cable bill cast the first stone. 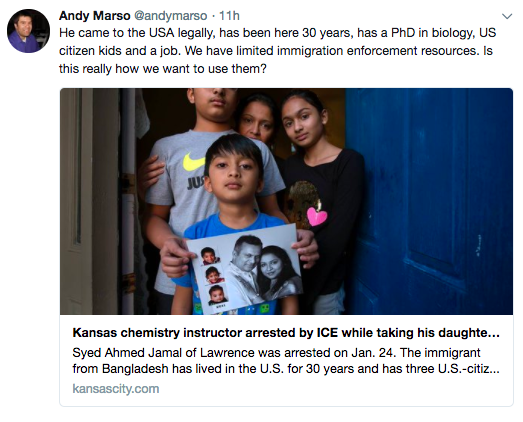 I’ve said this before and I’ll say it again: A key feature of any crime worthy of the name, it seems to me, is that the act of committing it is clearly and negatively disruptive, either to an individual life — a person may be injured, killed, deprived of property or merely their sense of well-being — or to the community at large.

ICE’s arrest of Sayed Jamal does more to disrupt my community than his presence here does. What’s happening here is wrong.

Those interested can sign the petition at www.Change.org. (Search for “Help to stop the deportation of Syed Jamal.”) Community members are also encouraged to address letters of support to the U.S. Department of Homeland Security. Mailing and email addresses can be found at http://www.dhs.gov/direct-contact-information. Letter writers are asked to include Jamal’s case number — 095209456 — in their letters.

Community members are also encouraged to write letters and sign the petition during two events Saturday. The first, from 2 to 3 p.m., will be at Plymouth Congregational Church, 925 Vermont St. The Islamic Center of Lawrence, 1917 Naismith Dr., will host a second session from 4 to 5 p.m.

I’m not sure a public display will help Mr. Jamal. But it cannot hurt.