A few months ago, I asked what you’d trade to get a deal on DACA.

You responded with what I like to call “The Godfather Part II counteroffer“:

So where are we at?

Let me gently suggest that the “no compromise” option looks a bit iffy at this point. While President Trump has said he’ll sign whatever bill Congress gets to his desk, the signals coming from the White House are both confused and straightforward: Confused, in that every Trump statement on the issue gets immediately walked back by his aides; straightforward in that what they want — and what they’ll get him to accept — will involve some combination of increased border security and reduced levels of legal immigration.

It’s worth asking again in light of today’s Ross Douthat column in the New York Times, in which he suggests the Stephen Millers of the world are going to have a seat at the table that crafts that compromise.

Miller is the White House’s point man for immigration policy (and for strange and strident encounters with the press). He is also an immigration restrictionist: He wants a policy that favors skills-based recruitment over extended families, and he wants a lower immigration rate overall. He says he’s concerned about assimilation and crime and native wages; his critics say he just wants to keep America as white as possible, and that by even bringing him to meetings Trump is making a deal impossible to reach.

Americans have become more pro-immigration since the 1990s, but there is still a consistent pattern when you ask about immigration rates: About a third of Americans favor the current trend, slightly fewer want higher rates, and about a third, like Miller, want immigration reduced.

The present view of many liberals seems to be that restrictionists can eventually be steamrolled — that the same ethnic transformations that have made white anxiety acute will eventually bury white-identity politics with sheer multiethnic numbers.

But liberals have been waiting 12 years for that “eventually” to arrive, and instead Trump is president and the illegal immigrants they want to protect are still in limbo.

Douthat’s remarks have received derision in the lefty Twittersphere for what I think are understandable reasons. 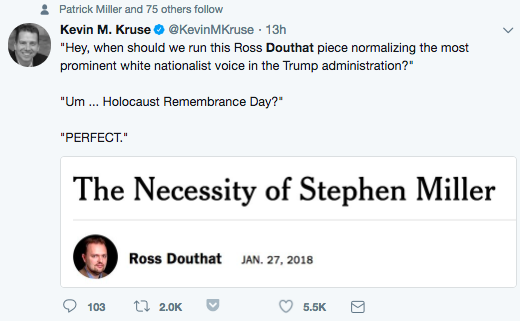 Here’s the problem: In crucial respects, Douthat’s not wrong.

Presidents going back to George W. Bush have sought a grand bargain on immigration. They’ve failed, because the immigration hawk faction has always had enough power to block any agreement. And that faction isn’t fringe: They’re, um, running the country right now. Try as we might, we can’t wish that away, or factor them out of the equation.

Underlying Douthat’s column is an attempt to wrestle with a question liberals haven’t answered very well since 2016, but which we’re going to need to answer soon. Let me put this as succinctly as I can:

How do we do democracy when so much of the electorate seems, plainly, animated by bigotry?

Democracy isn’t just about who wins elections: It’s also frequently marked by compromise.  (Or was, at least.) Sometimes the minority gets a voice because it has leverage; sometimes, people in the majority realize that elections will eventually put them back into the minority and so want to pass legislation that won’t be repealed immediately when the other side takes power. Steamrolling isn’t always an option, and it’s an option probably less often than you’d think.

When it comes to the Trump Administration and immigration, the options, it seems to me, are twofold:

• Hold our nose and strike an imperfect deal.

The former route is tempting. But it leaves DACA recipients in limbo, maybe even deported.

The second part maybe saves the DACA recipients, but leaves us feeling soiled. It maybe also gives the Trump Administration a victory that signals to middle-of-the-road voters he’s not so bad after all. Which might give us eight years of Donald, when one has already been exhausting enough.

Neither route is perfect.

Since we bring a Mennonite perspective to the blog, it’s worth noting there’s a longstanding tradition of the church of staying out of politics altogether, in part because it requires compromising oneself to get anything done.

Understandable approach. I sat out the 1996 elections because I thought it correct.

In this case, though, there’s the “Dreamers” to think of. And my own sense is that the worst act is to leave them in limbo or see them deported; the best act is to secure their future to help the live full lives that can contribute fully to our communities and country.

My own answer to the problem of democracy is this: Work for compromise where you can — as long as you don’t compromise your way into, say, half-genocide; know where your limits are — while working to convince as many people in the electorate to boot the Stephen Millers of the world from power and influence.

I’m mindful, writing all this, of Dr. King’s well-known contempt for “white moderates.” I’m not interested in being one. But I am interested in securing the future for the Dreamers, and I’m not sure how else to get there. Maybe this is a failure of my own imagination, but I don’t see anybody out there offering a magical option where we get that result without compromise.

It’s easy to get mad and call Ross Douthat a racist, I guess. It’s less easy to get a solution to the DACA situation without dealing with the people we think are racist. And it doesn’t offer us a way to do democracy in a country where racists get a vote too. It’s a terrible conundrum, but it exists nonetheless.