The Mary Option: Let’s Stop Listening to Men Tell Women about their Sex and Faith Lives

How have we gotten so far into Sixoh6 without talking about Mark Regnerus?

For those who don’t spend their time following academic gossip, in 2012, Regnerus, a socially conservative Catholic at the University of Texas at Austin, published an article about the impact on children of being raised by same-sex parents. Well, that’s what Regnerus said it was about, but lots and lots and lots of researchers and research organizations, from Regnerus’ own chair to the American Sociological Association called the study bunk and it was really about arming anti-gay groups with pseudoscience, which is just what happened.

Research on couples parenting in same-sex relationships is hard for lots of reasons, in part because we simply don’t a large enough population of people doing it to capture them in a random sample. If you picked 1000 people out of hat, it’s very possible that none of them would be partnered with in a romantic same-sex household and rearing minor children together. (Only about 42% of “family households” have children in the home at all.) In the absence of a good random sample, sociologists can use other sampling techniques, such as snowball sampling (finding one same-sex couple who are parenting and asking them to help you find others), but this has its drawbacks, too. You can easily get yourself in a sampling corner–for example, surveying or interviewing only those with enough money to pursue artificial reproductive technologies or those who attend a welcoming and affirming church or who are part of a queer parenting support group.

Regnerus’ work aimed for a random sample, which is the gold standard in survey research, but the result was that the number of people he says were raised by gay parents was small. Even worse–and this is where we get to questionable choices in his methodology–Regnerus categorized lots of kids as “raised by gay parents” when they probably weren’t. Some were raised by a single gay parent but not by that parent’s partner; some were lived with their gay parent and their parent’s partner for less than a year, others just for 2-4 years.

I started by calling the Regnerus Controversy “academic gossip,” but that really underestimates the situation. During this time, Regnerus served as an expert witness in cases about same-sex marriage and contributed to an amicus brief opposing same-sex marriage. In other words, there could have been dramatic consequences for queer families if Regnerus’ sketchy research been heeded.

Above, William-Adolphe Bouguereau’s St. Mary of Egypt. Mary (344-421) ran away from home at age 12 to Alexandria. A sex addict and a sex worker (and a spinner of flax, as depicted in this painting), she joined pilgrims on a trip to Jerusalem in order to find new sex partners. When she arrived, she attempted to end the Church of the Sepulchre but found her way stopped by an invisible force. She recognized an icon of the Virgin Mary outside the church, prayed for forgiveness, and had a transformative religious experience, eventually moving to the desert to live as a hermit. Traditional interpretations focus on her repentance, but I wonder if she wasn’t also a little tired of having to listen to men like Dreher and Regnerus yap on about women’s sexuality and faith.

Below, a Greek Orthodox icon of St. Mary. In many depictions, her skin is tanned from her time outdoors and her gray hair long, and she is shirtless. Living life free of the sexual expectations of men! Let’s call it the Mary Option. 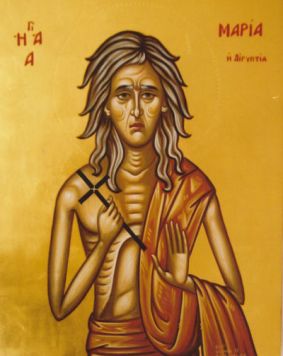 If you think that was vulgar to say, just remember that Regnerus and Dreher are arguing that Christian women don’t like sex because Jesus meets whatever need sex would otherwise fill. I find that terribly vulgar. And sexist. And a really sad, limited way of thinking about religion. Regnerus’ argument relies on the idea that sex (impossibly) replaces the search for transcendence, not that it could be part of transcendent and holy experiences. This is an impoverished theology of sex.

If we accept Dreher and Regnerus’ arguments, it means:

So, if Regnerus’ conclusions are harmful to women (and their partners) and grounded in questionable social science, why does Dreher quote him? Is it so important to Dreher to hurt women that he relies on falsehoods to do it?