To business owners who don’t want to pay living wages: Get a job!

Kellyanne Conway and I agreed on something this past week: able-bodied adults who currently used Medicaid services should have jobs that include health insurance benefits.

Conway made her remarks on ABC’s This Week and also on Fox and Friends. In a real “let them eat cake” moment, Conway suggested that able-bodied people who use Medicaid should look “other places” for employment that includes benefits. The problem? Most adults who use Medicaid (59%) do in fact have jobs–the same percent of Americans who work overall —and a large majority (80%) live in families where at least one adult is working; these jobs are just part of the huge number of jobs in US’s private sector (46%) that don’t pay very much and don’t include benefits. A person could work a low wage job 24 hours a day (and some people come close) but never get health benefits because more than half of non-government jobs don’t come with health insurance.

Conway knows this. She’s perfectly okay with low wage employers not providing healthcare benefits. She means that, somehow, these workers should be able to locate non-existent jobs that provide benefits. It’s amusing to her, I suspect, to watch poor people compete against each other for scraps.

I mean that jobs should pay enough, including benefits to insure workers have healthcare. (Actually, I don’t. I think health care and employment should be unrelated because what you do for a paid employment has nothing to do with your need to go to the doctor. I think that businesses should be released from the obligation to provide health insurance so they can focus on other things, like producing whatever it is they are supposed to be producing. Like a growing number of Americans, I’m pro-single payer healthcare and think it will be good for business.)

But that’s not reality. Reality is that even people with health insurance can’t afford their medical bills. (If you click on just one link in this post, let it be Helaine Olen’s recent article from The Atlantic. Olen is the rare finance writer who puts economic and financial issues into their larger social contexts.)

The word for this is welfare—not the Medicaid benefits received by low-wage  childcare teachers, home health aids, nail technicians, and restaurant staff who earn so little but welfare for companies that refuse to pay wages that keep workers out of poverty.

If you own a business and don’t pay people a living wage, you don’t own a business—you are running a charity, and that charity is “I want to own a business but make someone else pay for the costs.” And somehow, in the US, where we venerate businesses and despise the poor who work for them, we think that’s “entrepreneurial” rather than “entitled.”

If you run a business and expect that you should earn a profit while your employees can’t afford the rent on a basic apartment, you are not running a business but a scam; you are ripping workers off for your own benefit.

If you run a business and refuse to charge prices to cover your actual costs because customers won’t pay that much, then you have a product or service that isn’t worth its true cost to consumers. If the world doesn’t pay you enough to cover your actual costs, that’s a signal that what you are offering isn’t valued by consumers. Don’t let it hurt your feelings; instead, let it inspire you to bring something to the marketplace that folks will value.

Paying workers more might mean that you earn less or that your customers pay more. This may indeed be the consequences of accurately calculating the cost of having employees. As a consumer, I am willing to pay them. With relatively few exceptions—child care workers being the one that most quickly comes to mind*—we can afford to pay more for products and services provided by underpaid people. If you can afford a $30 manicure, you can probably afford a $40 one. If you want to eat dinner out, you can afford to pay a $15 wage (as diners in Minnesota will soon do)—or you can eat at home or skip the manicure. 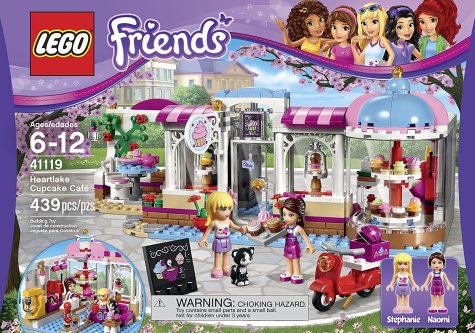 Always wanted to run a business based on your passion, but don’t want to pay employees enough to live? Perhaps you should try the Lego Friends Heartland Cupcake Cafe.

In all the worry that increased wages will result in increased costs for everyday consumers, folks like Conway ignore the fact that it is the cost of hugely expensive and largely unavoidable items—healthcare, childcare, housing—that are most people’s major financial stressors. If working people weren’t paying 8% of their yearly income to healthcare costs, they could afford more expensive consumer items.  If the costs of manicures goes up, the tens of millions of Americans in poverty will be okay. They’re not getting them anyway.

And to the concern that businesses will lay off law-wage workers if forced to pay them what they need to live: I doubt it. If it was possible to get this job done any cheaper, then businesses would already be doing it. And if a business closes because it really can’t pay its workers a living wage, then it was never a business anyway. It was a hobby that the business owner asked workers to pay for.

*Updated to add: I don’t mean that childcare workers don’t deserve more pay. They do! They absolutely deserve it and need it. I just mean that childcare costs are already huge in the US–it costs more than college in most states, and college is way too expensive for families. The solution is subsidized child care (including paying stay-at-home caregivers for providing care for children and adults who need assistance) to insure that such workers receive a wage that will allow them to support themselves while also keeping care affordable.