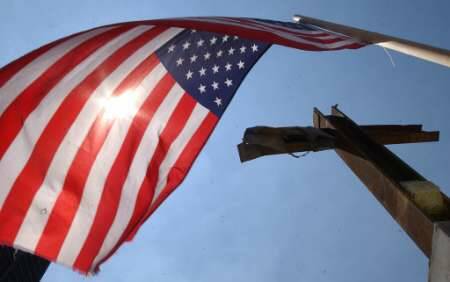 I’m not one of those pacifist Christians who pooh-poohs the idea of Memorial Day. Though my own inclinations are dovish, I have friends who have served honorably in the military — I care very much for and about those friends — and I know that people who served in our military have almost always done so with the best of intentions. Live and let live, I say.

On the other hand, I have to admit being skeptical of this:

Every year there are the usual Christian bloggers denouncing the supposedly idolatrous nationalism of patriotic holidays like Memorial Day and July 4. Any display of the flag in proximity to the church or congregational reverence for fallen soldiers is ostensibly a grievous rebuke to the Gospel.

This globalist mindset for Western secular elites is increasingly true for many American church elites, including some Evangelicals, whose elitism recoils at populist patriotic spirituality in Christian and especially evangelical subculture. It’s part of a larger spiritual universalism that rejects or minimizes particular loyalties. Although it nobly aspires to love for all humanity, it fails to appreciate that love meaningfully can only begin with relations in proximity, with family, friends, neighborhood and country. Loving everybody everywhere abstractly is unlikely without first loving nearby persons.

And that’s why Jesus was the Messiah *just for the Jews.*

Loving the people around you is easy, but Jesus rarely preached the virtue of easy attachments. He spoke of loving your enemies, of visiting the prisoner. He offered parables about good Samaritans — Samaritans being outside of Jesus’s circle of “nearby persons.” John 3:16 speaks of a God who loves *the world.*

I am very much against Christianity as nationalistic tribalism. It’s one reason I’ve not found a place in the church. Living the way that Jesus speaks, with a kind of universal love, is damn hard. It doesn’t preclude your nearby attachments. It does suggest that killing for those attachments … might be unwise.

Which might be read as a criticism of Memorial Day, after all. Nah. I suspect some of us are called differently. Life is complicated.