You already knew it, but it’s been awhile since we had such a stark reminder: Donald Trump lives his life believing other people are as evil as he is.

This is a classic narcissist belief, but it’s also the belief of white supremacists. They believe that people of color are as evil as they are–and that they must maintain power in order to prevent these evil others from getting the power to hurt them in the ways they themselves hurt others.

They know the depravity of their own hearts, and they fear others will treat them as they have treated others.

This is not projection. It is reasonable fear.

They should be afraid, because justice might reasonably demand punishment. Indeed, the punishment they most often demand is just this–an eye for an eye, as Donald Trump’s favorite Bible verse (and Jesus’ least favorite) says.

It might demand restitution, which would mean giving their unearned privileges to those they’ve hurt.

Trumpism, the Republican party, American political conservativism, and white supremacy (I have ordered these in a list as if they are separate things, but they are nested things.)–these are characterized by a flight from responsibility. Trumpists do not fear a changing world–they fear being held responsible for their violence, because they know that they themselves, when they have power, are violent, and so they fear anyone who has power over them will be violent. They cannot imagine people better than themselves because they imagine themselves to be the best.

They live in a graceless world, and their shallow evangelical theology reflects that. It’s theology where grace is spiritualized, trotted out to absolve Trump of his divorces, but there is no expectation that it transforms someone. They cannot give grace, but they also have no receptacle for receiving it. When Donald Trump said he had no need to ask God for forgiveness, he was speaking for his supporters, too: they have done nothing wrong. They are, in fact, the victims. Or, at least, they will be if they aren’t oppressing others.

This is not new. Here is Thomas Jefferson in 1820.

But, as it is, we have the wolf by the ear, and we can neither hold him, nor safely let him go. Justice is in one scale, and self-preservation in the other.

Jefferson understood the dilemma: the longer the US held on to slavery, the more exhausting the project of oppression was–and the more damage the end of slavery would do to the status quo, which became dependent on it.

But we can also read in this quotation, I think, white fear that those who had brutalized Africans and their descendants deserved what they might get. They didn’t deserve self-preservation. The wolf is not to blame for biting the one holding his ear. He doesn’t do so because of a particularly debased nature, either. The wolf does so because that’s what the person holding his ear deserves.

I see it here, too, in this tweet by Donald Trump, with far less self-awareness that Jefferson: 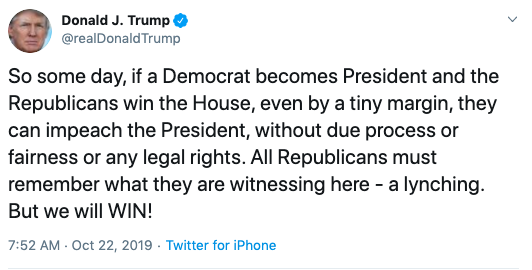 Some day, he says, if the roles are reversed, then the Republican House can impeach a Democratic president.

Some day, if the roles are reversed and people of color have more power, white people will be forced to suffer.

Some day, if the roles are reversed and women have more power, men will be forced to suffer.

Some day, if the poor have power, the rich will suffer.

And they cannot imagine another world because to do so would mean that the one they themselves created was wrong.

Lynching, like rape and genocide and starvation, is not a metaphor. It’s a real thing that happens to real people at the hands of violent people like Trump, a proud perpetrator of sexual violence, religious bigotry, and now, the start of genocide against the Kurds. Trump, like other rich white men, has no model of suffering. (This does not mean that Trump has not suffered. It means that rich white men as a category do not suffer. There has never been a campaign of terrorism against them.) To hear him compare the use of the Constitution to a lynching is painful. It’s painful to those who have suffered from true violence, and it’s painful to those who love the Constitution.

But it is also an admission that he understands that white people have reserved their greatest violence for people of color. Nothing is worse, he says, than a lynching. And that is because nothing is more violent than white supremacy in this nation.

He doesn’t want such violence to stop. He only wants to be on the winning side of it.