As the 2020 election approaches, conservative Christians will have to continue to contend with the fact that Donald Trump loves what is evil and hates what is good. How do you take a bad seed yielding bad fruit and call it holy? It’s tricky business, but we know that the conservative evangelical world will be working at it full time over the next year.

One strategy has been to try to insert him into the Biblical story. Miriam Adelson, who isn’t a conservative Christian but a rightwing Jew whose politics align with the Christian Right, suggested we add a Book of Trump to the Bible. And I’ve written extensively on the effort to turn Trump into King Cyrus–a non-Jew who saved the Jewish people by restoring them to power in Jerusalem.

Another Biblical figure, though, has captured my attention with his likeness to Donald Trump: King Xerxes I.

If you know him, it is probably through the story of Esther (another figure conservative Christians sometimes invoke when discussing Trump). He is sometimes refered to as King Ahasuerus. The brief version: The king’s previous wife refused to let herself be publicly sexually humiliated by him, so now Xerxes has delivered a new law that all wives obey their husbands–and he’s on the hunt for a new wife to add to his harem. He calls for the most beautiful women in the land to come before him. He chooses Esther to be his queen, not realizing she is Jewish. Later, her uncle offends Haman, a member of the king’s cabinet, by refusing to bow to him as doing so would violate his Jewish faith. Haman convinces the king to, in response, murder all the Jews of the land. Xerxes agrees. Though entering the king’s presence without permission could mean her execution (That’s the kind of guy we’re dealing with.), Esther does so to plead on behalf of the Jewish people. The King can’t admit he made a mistake in trusting Haman or that broad-scale slaughter of his subjects is bad for morale, so he won’t renege on the policy. However, he permits Jews to fight back. In other words, he creates a giant mess and refuses to clean it up but instead requires other people to fight for the life he’s threatened to take from them. 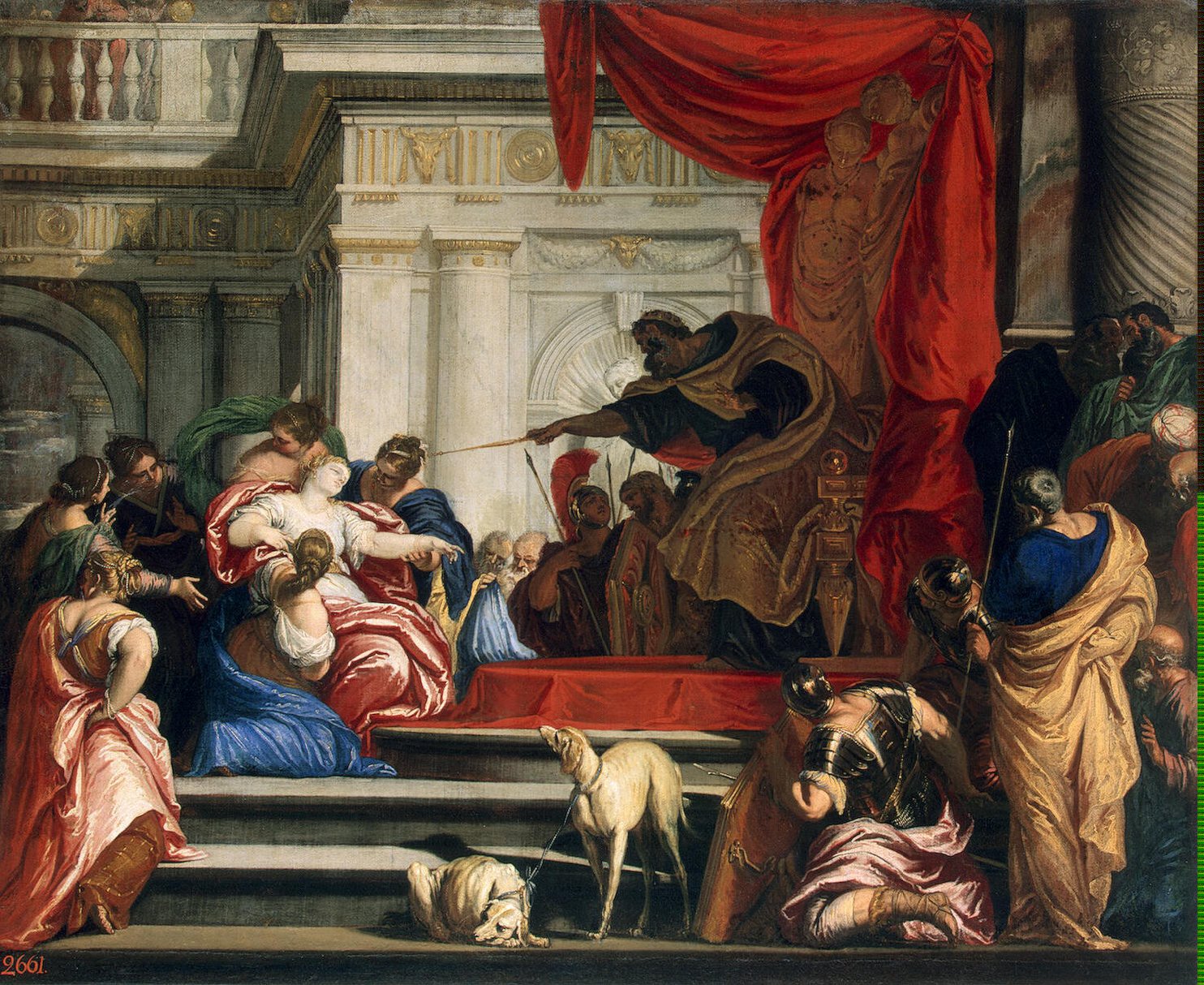 Lefevre Valentin’s Esther Before Ahasuerus. The king chose her for her beauty–and because was embarrassed by Queen Vashti’s refusal to be sexually degraded before his drunk buddies. Everything about the story points to a fool ruled by appetite and ego.

All along, we see that Xerxes is both incompetent and dangerous because of his ego. He makes his decision of marriage based on the beauty alone. He can’t discern who is a good and trustworthy advisor and so ends up employing Haman, who is in it only for his own good. (Is that Rudy Guiliani in my metaphor? John Bolton? Sarah Huckabee Sanders? Stephen Miller? I don’t know–there are so many possibilities in the Trump White House.) He’s a fool, and everyone knows it but him, but, still, they fear him because he has power. He’s rule by his appetites and his ego.

The other way you might know Xerxes is through Herodotus’ history or popular depictions of him in films like The 300 Spartans or the graphic novel 300. He’s commands an amazing military at the peak of the Persian empire, holding territory from India and Egypt and Greece. The incredible size and power of his military, though, is also a signal of his hubris and hint to his eventual demise. He is presumptuous, ignoring ominous signs that he overestimates his abilities and evidence that the gods do not bless him. While he wins the battle of Thermopylae, it illustrates the bravery and devotion of the 300 Spartans and 700 Thespians–men who “not for gold but for glory”–in contrast to Xerxes’ men, who had to be driven to fight under the whip. He might win, but throughout his effort to expand his empire, he cannot inspire true loyalty because he has no higher values.

Perhaps the most illustrative story about Xerxes is that he attempted to build a bridge to the Hellespont, part of the Turkish straits that separates Asian from European Turkey, in order to invade Greece. When a storm destroys the first bridge, Xerxes beheads his engineers and orders his soldiers to whip the sea with 300 lashes,  brand it with hot irons, and sink shackles into it as punishment. His arrogant belief that he should control nature itself is recorded as the reason why the gods punish him in Aeschylus’ The Persians.

Who are the people in the Trump administration who carry out his absurd, dangerous, wasteful, ego-protecting demands?

That is Trump–a leader  who suggests nuking a hurricane like Xerxes whipped the sea. Xerxes is a person who signs a decrees to kill all the Jews and only limits it when his own wife–chosen only for her good looks–is threatened; likewise, Trump’s only principle is self-interest. And just as Xerxes ignored all the warnings of his destruction, Trump can’t bear to be wrong and will never truly correct course, no matter how many people his folly kills.

Conservative Christians might note that Xerxes was the grandson of Cyrus the Great. He was given power, though he had an older brother (from another mother and thus not related to Cyrus) who might more rightfully claim the throne, because of the Persian’s willingness to insert him into the story of their empire. It’s a lesson about how nostalgia is no way to chose a leader.