“When did you first realize you were white?”

New 606 Contributor Melanie Zuercher reflects on that way that being white means you don’t have to know what your African American neighbors’ lives are like.

I recently participated in a 2½-day anti-racism analysis at my workplace, a small college. One of the exercises asked us to think about “when you first realized you were [however you identify; in my case, white].” I suspect my first time was right after Martin Luther King Jr. was murdered. We were living in Durham, N.C., in Duke University graduate student housing. One afternoon when some of us kids were playing behind the apartment complex, a tall black man walked by. That’s all that happened, although of course this can be unpacked further. But that’s for another time.

The training exercise made me think about the students of color I knew through most of my public-school years, which took place in Harlan, in southeastern Kentucky, in the decade from 1968-78. We attended the “town school,” the Harlan Independent School District, and it’s from those years that I remember having black classmates. Only decades later did I figure out that “the Rosenwald school,” an abandoned brick building a block down from what was then the Harlan Elementary School gym, and which I had been told from Day 1 was “the black high school,” had closed only five years before we moved to Harlan in 1968.

Starting with my first year at Harlan, in Miss Rice’s 3rd-grade classroom, I always had at least one black classmate. There might have been more but the one I remember was a girl named Blondine Jones. (I was fascinated by her name, and it’s only now, 50 years later, that I think to wonder: “Blondine? What was that about?”) When we were in high school, I learned she preferred her nickname, Cookie. I would love to sit down and talk with her about names and other things, but she died prematurely (from complications of diabetes, if I remember right, but I haven’t been able to locate an obituary so I can’t be sure), so that will have to wait for heaven.

Whether or not Cookie had other family members in Harlan schools, I don’t know. She was the only “black” Jones I knew. There were, however, two families with children in multiple grades, the Hendersons and the Raglins. There was a Raglin (Leonard) and a Henderson (Warren) in my sister’s grade, a year behind me, and there might have been a Raglin in my brother’s, five years back. When I was in the high school girls’ choir, I looked up to an older Raglin (Lydia) and Henderson (Bertha). And I thought of Gwen Taylor – a year older, who stood near me on the risers, since we were both in the second soprano section and of similar height – as “one of my best friends.” (How little I knew. She was as sweet as could be, and very kind to me, but I was so unaware of what her life was really like, and still am.)

I also remember being told early that “Harlan has the highest black population in eastern Kentucky.” The figure was 10%, and most likely was for the entire county, not only the city of Harlan. I doubt the Harlan Independent school district reflected that, though again, I can’t say for sure. The teaching staff didn’t – there was one black elementary teacher and one black junior high teacher and a couple of black coaches who also had other roles at the high school. What put Harlan up there was the former coal camp of Lynch, in the northeast end of the county. Lynch was then the smallest of the independent school districts in Harlan County and also known for consistently having among the best football and basketball teams, “on account of all those black players.” 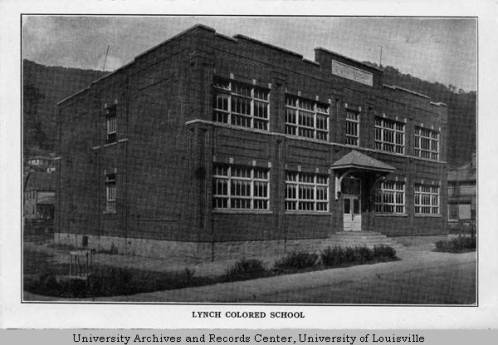 I recently read an article from the New York Review of Books about “the miners of black Harlan.” According to the article, in the boom years of coal that followed the Great Depression (the 1940s and early 1950s), a little more than half the miners of Lynch coal were black. However, at Portal 31, a former coal mine in Lynch now turned coal-mining museum, there are no voices of black miners included. Sad, but not surprising.

Is the assumption that the words of white miners reflect the experience of all miners? Is it because whoever conceptualized and developed Portal 31 – clearly not people of color – simply didn’t think about the fact of black miners? I suspect the answer to both questions is “Yes,” plus more besides.

And then I wonder, Why were there black families living in Harlan at all? While the town was built on a coal economy – everything was then, and suffers for it now – Harlan was not a former coal camp, like Lynch or many of the other small pockets of black population. Historically, slave numbers in Kentucky had been lower than in many Southern states because there was a huge chunk, the eastern mountains, where there were neither large farms nor people inclined toward chattel slavery (which didn’t mean they weren’t racist – they were). There were no big cities or factories in eastern Kentucky to catch and hold those African Americans coming from the Deep South in the Great Migration. Maybe the forebears of the Jones, Henderson, Raglin, Taylor, Body and Gray families in Harlan were coal miners. I don’t know.

That’s really the bottom line – all I don’t know, about the racial history of this area where I spent a significant chunk of my childhood and teenage years, about what it was actually like for my classmates and choir sisters to be “the good black people” (or the other stereotypes they faced). As I keep unpacking what “white privilege” means, personally and more broadly, this is a big part of it – ignorance. There are many things about our racialized cultural and social systems in the United States that are so hard to change (not that we shouldn’t keep fighting that battle), but this is one that’s easy. Read. Ask. Learn.