We all have fallacies that we’re inclined toward, probably. One built into American culture is the just belief hypothesis–a cognitive bias to believe that we get what we deserve, both good and bad. In a culture that values individualism and free will, it’s tempting to believe that our experiences are the results of our actions, not structural forces that we often cannot see, much less control.

It crops up a lot in my discussions with people about guns. For years, a member of my extended family insisted that he had to have easy access to unlocked, loaded guns (either carrying them on his person or stashing them around his house) because he might need to defend himself or his guests from some danger. No amount of information about the dangers of guns–that he was a far bigger danger to himself and his guests than he was to a potential intruder–was persuasive. After all, for every statistic, there is an outlier, and why shouldn’t he be that outlier? This is stupid thinking when it comes to the lotto (“Someone’s gotta win!”) but deadly thinking when it comes to weapons.

Just world hypothesis teaches us to credit bad things to the badness of people and to see good things as evidence of their goodness. (It’s kind of a riff on Puritan Calvinism. Though you couldn’t know whether you were elect, you could look at your life and see if God’s blessings in it, which might be a sign of your choseness for salvation. Then you begin to do the work of those blessings in order to make sure that there was evidence of salvation in your life. Hence the Protestant work ethic.) Thus, if you are a good person, bad things shouldn’t happen to you–and if something bad happens to someone else, it probably means that they deserved it.

Because, in our imaginations, we are good people, we assume that we can control a gun situation. Look at the number of grandparents whose irresponsibility with guns results in the death or injury of grandchildren in their care; they believe that they are good grandparents (even better because they have guns to protect their grandkids!) and that, somehow, this means that gun deaths and injuries won’t happen to them. Somehow, their grandchildren are more obedient than the majority of kids (who touch a gun they find before they locate an adult). Somehow, their gun won’t kill a child. Somehow, they are faster than a speeding bullet and can prevent death and injury. It’s magical thinking.

Six Philadelphia police officers were injured in a 7 1/2 hour standoff with a sniper recently. Many more officers were involved in the incident. All of them are better trained than your average gun owner. Officers miss their target more than 80% of the time. Again, they are trained to fire in high stress situation, and your average gun owner is not.

Why, then, are so many gun owners so confident that they can Stand Your Grand effectively? 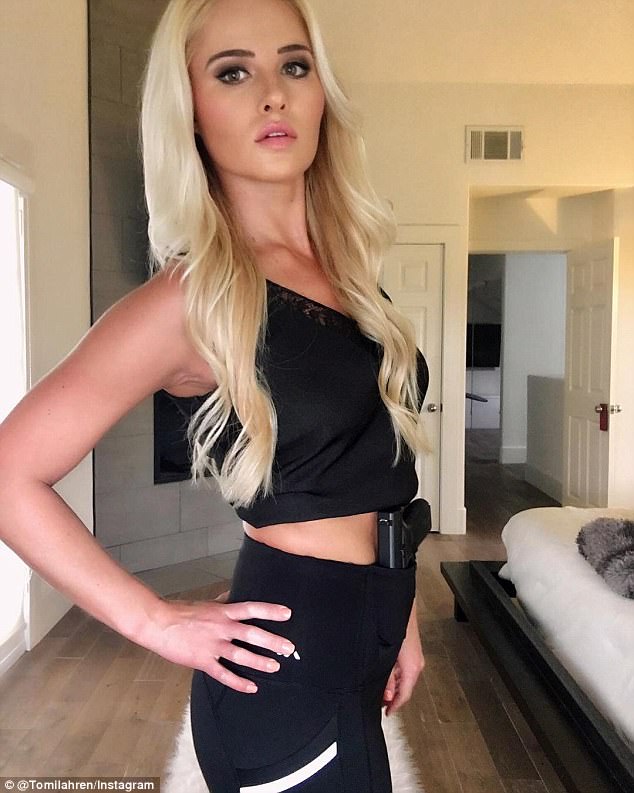 Above, conservative personality star Tomi Lahren wears a gun in yoga pants made with a special pocket to stow a weapon in an Instagram post she made in 2018. Surely, this weapon can only hurt bad people and never hurt good ones.

While there has been some research on the application of just world theory to guns, what I have found so far has focused on victim blaming (that victims of gun violence and incidents somehow deserved the pain they have suffered) rather than gun owners’ overconfidence that they are going to save the day rather than kill themselves or a loved one.

We can know, cognitively, that our own goodness is irrelevant when it comes to guns. But I’ve not yet met a gun owner who leaves their guns unsecured (which describes the majority of gun owners) who believes that bad things could happen.