Why are more people being killed by their partners?

I know you don’t need any more bad news these days, but we have a responsibility to understand the moment we’re in. Part of that includes a rising rate of murders related to domestic violence. Murders of both men and women are increasing, though murders of women have increased more than murders of men.

Research out of Northwestern University published this spring in Violence and Gender argues that the rise in murder in romantic relationships, which is almost always committed by men against women, are increasingly committed by guns. While murders by other weapons are falling, murders by guns have increased by 26%. 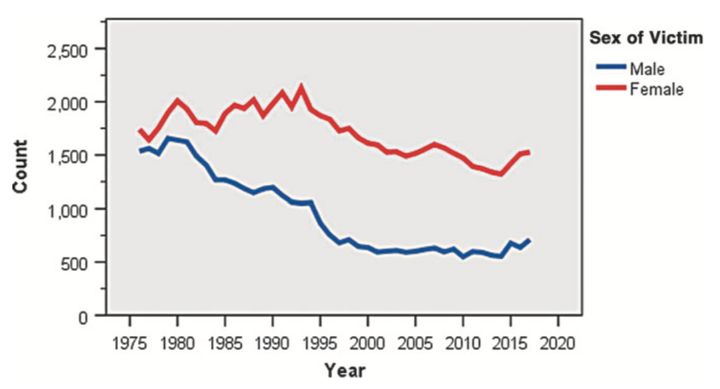 When women are easier able to walk away from a bad marriage, they do so rather than engaging in violence. Unfortunately, many divorces labeled “no-fault” are actually violent. Our court systems tend to focus just on ending them rather than on holding perpetrators of violence accountable.

Nearly half of women who are murdered are murdered by their male partners, and many of these occur after a woman leaves the relationship. In other words, when a woman walks away from a marriage, she maybe saving a man’s life, but walking away is also the time when a woman is most in danger.

Domestic violence is a key example of what sociologists talk about a private trouble that’s a public issue. Domestic violence endangers everyone. Almost always, mass shooters have a history of domestic violence. Even the most intimate of relationships are shaped by public policies–such as access to guns. Every day, four women are murdered by their partners–and everyone can do something to stop it.