What is the purpose of anti-abortion laws?

As a block of Southern states pass legislation criminalizing abortion, it’s worth asking what the likelihood of them taking effect is.

Not much–but that’s not the point.

If the point is to overturn Roe, these harsh measures might not work. Roe had in it the seeds of its own destruction. It was never a pro-choice law for women but instead framed abortion as a right of physicians. It allows for the possibility of revision based on new developments in fetal medicine. And in seeking to balance the right of the state to protect fetal life v. the right of women to bodily autonomy, it begins with the idea that the state has a duty to and the authority to restrict abortion. Those aren’t great starting grounds for a defense of abortion rights.

But Roe isn’t even our current abortion law. Still, it is shorthand for “the right, recognized at the federal level, to terminate a pregnancy.”

These state laws, I am betting, won’t make it to the Supreme Court, which gets to pick and choose its cases and will pick challenges to abortion rights that are less radical. They will die before they get to the Supreme Court. Three months ago, Kentucky passed a ban on abortion when the fetus at six weeks of development–a bill similar to Ohio, Mississippi, and Georgia’s and ones currently in process in eight other states, mostly in the South–and it was promptly struck down by a federal court. In 2013, North Dakota tried this law and it was successfully challenged in court, as is happening now to Illinois’ six-week ban.

And none of these bans are actually popular with regular people. Few Americans support total bans on abortion, which is what, in effect, these bans are.  At the same time, most Americans  support some kind of restrictions–but not like this.

So, if these laws aren’t likely to stand up in court or in the court of public opinion, why are legislature’s passing them?

One way to answer this question is to observe the effect they are actually having. Since these results were predictable, it’s fair to assume that they were intended.

These laws are energizing evangelical shock troops. After a midterm drubbing like none in recent history, with continued scandal coming out of the White House (including the threat of public disclosure of documents that show that Donald Trump is not very rich and not very good at business), a slowing global economy, an unnecessary trade war with China, and the threat of military action in the Middle East that will ask conservatives to again send their children off to war, Republicans have to deliver on something. Just like shock troops take heavy losses to break through a military line, these laws will be picked apart and shot down, but they’ll move the Trump re-election campaign forward.

Conventional wisdom is that conservatives held their nose and voted for Trump because they opposed abortion; research undermines that and indicates that it is racism, more than anything else, that drove people to vote for Trump. Abortion just gave them cover to do so. It’s racism with a side bonus of sexism and Christian supremacy. 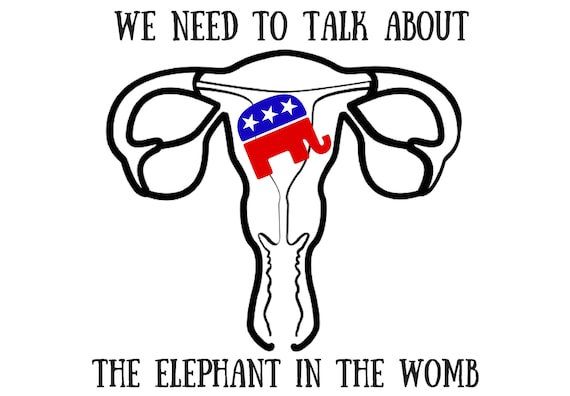 These laws are also, if my Facebook feed is to be trusted, making women really mad, angry, sad, frustrated, and terrified. Maybe worst of all is the feeling that they are not safe–not safe to have sex, not safe to pursue a wanted pregnancy, not safe talking to their physicians, not safe with their partners, not safe as citizens.

And that, I think, is the bigger, even more frightening point: These laws are the boldest move yet among political leaders–nearly all white men–to define who does and who doesn’t have power, who can rely on the state to protect them and who can, in an instant, it feels, find themselves in the crosshairs the state.

This is much bigger than abortion: it’s about the authority of the state to put half of its citizens on alert that they have no influence on laws that intimately effect them.

Less than a quarter of Americans are white male Christians. They can’t preserve their power through demographics; they have to do it by restricting who is protected by the Constitution.

In that way, these laws are working.