White Women and the Misperception of Danger

A few years ago, when we lived in Arkansas, our family had a powerful encounter with white privilege. I’ve been thinking about it in light of the killing of Botham Jean, the black man killed by a white off-duty police officer in his own home when she entered it, she says, thinking it was hers, and mistakenly thought he was a burglar. Amber Guyger was originally arrested for manslaughter but was indicted for Jean’s murder about a month ago.

I was driving home from picking up my older two children from elementary school and my youngest from childcare when I saw an older white woman slowly driving a pickup truck down the street. I didn’t think much of it, as it was pouring rain, so everyone was driving slowly.

Because it was raining so hard, I did something a little unusual for me: instead of waiting for all three kids to unbuckle and get out of our van, I told the older two to stay in the car for a moment while I unbuckled the youngest, who couldn’t yet get himself out of his carseat, and unlocked the front door to our empty house. That way, they wouldn’t have to get soaked while I fumbled with a toddler, a diaper bag, my work bag, and the keys. When they saw me open the door, they could just come in, and I’d lock the van with the remote key.

I hustled inside, dropping bags at the front door, and went to a back bedroom to change the littlest one’s diaper. It took me a few minutes. When I came back, a strange woman–the lady from the truck–was in my kitchen. My older children were there, too, looking unsure of what to do.

My heart jumped into my throat, of course, but I wasn’t the only one who was scared. The woman, in her 60s, I think, looked terrified with a dawning realization that she was in the wrong house.  I was glad that she realized it and rushed to explain it before I had to ask. But there was a moment when we looked at each other, before she spoke, when we both recognized the possibility of real danger.

She was trying to visit her niece, she explained, but she hadn’t seen her in a few years. She knew she lived around here (In fact, she lived next door.) and had young children, but she wasn’t sure which house. When I got out of the car, she thought she recognized me as the other woman, my neighbor. She pulled in after I’d got inside, so I didn’t see her truck in the driveway or, over the rain, hear her pull in. Thinking that my two older children were her great-niece and -nephew, she asked if their mother was home, and they politely told her “yes” and opened the door for her to our house. It was only as she got herself a drink from the refrigerator and settled in for a visit, waiting for me to return from changing the baby, that she realized she’d made a mistake. At that moment, I reappeared.

Arkansas, like many states, allows people to use even lethal force without a duty to retreat if they are facing a home intruder who appears dangerous. That puts a lot of authority on individuals to determine what is a violent threat. At the time, the state didn’t have a Stand Your Ground law, though it may if legislation currently filed passes. But did this woman know the law? And would it matter, if she thought she was in the right?

The experience left me with a lot of what-ifs:

If you haven’t faced this exact scenario, ask yourself: Have you ever tried to open the wrong car in a parking lot? (Have you ever come out of a Utah childcare center, frazzled and with a cranky child, to a row of gray Toyota Siennas?) Many states consider a car an extension of the home, which is often (though not in all states) a place where people have more authority to use violence against a perceived threat. What would the details of that situation have to be for the person in the car to use violence against you–or, if the roles were reversed, for you to use violence against them?

White privilege means that I’m unlikely to be accused of being a danger if I make that mistake. It also means that if I use violence against someone I misperceive as a danger, I’m more likely to be excused and forgiven (not charged, not brought to trial, not found guilty, not punished), especially if that person is a person of color. 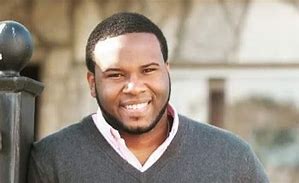 Above, Botham Jean, a 2016 graduate of Harding University in Searcy, Arkansas. Yesterday, the university announced a scholarship fund to honor the student. The priority use of the funds will be to support a student from the Caribbean, as Jean was from St. Lucia.

White women can’t trust that racist stereotypes won’t cloud our judgment in a moment of panic. When we are under duress, we do things that reduce our cognitive load and provide us with quick–if incorrect–answers, and stereotypes do this. Becoming a better decision maker is work, so we have to practice it every day so that we can do it correctly even when we’re scared. Culture is effective, and people are learning animals. White women learn fear because our culture tells us to be scared. But that is still our fault–for believing that lie and for continuing to repeat it.

In their civil suit against the city of Dallas, the family of Botham Jean argues that the police department trains officers like Amber Guyger to use lethal force  “even when there exist no immediate threat to themselves or others.” This is part of the problem. The other part is that our culture teaches white women, in particular, that men of color, are always an immediate threat. That Guyger felt threatened is central to her case. If we believe her, the fact that she, an armed police officer who had no right to be where she was, felt threatened by a black man watching TV in the comfort of his own home, is evidence that our culture continues to use white women to justify the murder of black men.