Ever since the statistic that 81% of white evangelical voters selected Trump in the 2016 election was first reported, white evangelicals embarrassed by this fact have been trying to find ways to parse it so that they don’t look like the Deplorables who comprise Trump’s base.

Timothy P. Carney at The American Conservative argues pretty persuasively, I think, that Trump evangelicals are white evangelicals who don’t go to church. Evangelical theology, which stresses the individual born-again experience over community or ritual, allows for this; indeed, anti-religion themes run throughout it, with “religion” here being understood as rote performance of ritual and blind adherence to morality without personal conviction (If you see hints of anti-Catholicism here, you’d be correct.).

Are Trump evangelicals just hypocrites, then–people who want to impose their vision of religious morality on others when they themselves can’t be bothered to go to church? Not quite. Here is Carney’s explanation:

He spends much of his article examining data that suggests that Trump as primary candidate did well among self-identified religious conservatives in places where churches were closing; in places where churches are strong, he did poorly. The issue isn’t churches necessarily but what they represent: social institutions that connect people to each other, provide a sense of identity and anchoring. They are a sign of social trust.

And those who have greater levels of social trust are less likely to fall for Trump. Those with less of us–they’re vulnerable to people who say things to them that make them feel justified in their fears. 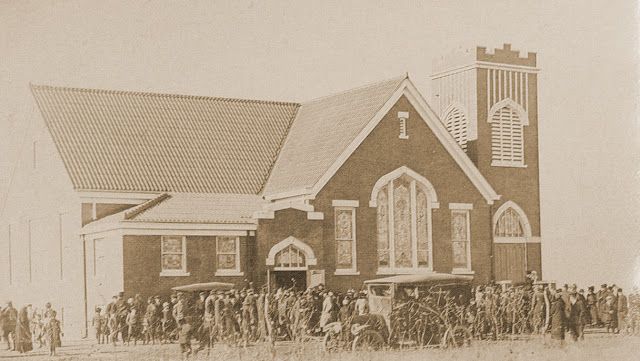 Above, Bergthal Mennonite Church in Pawnee Rock, Kansas, at is dedication in 1915. The church disbanded a few years ago. What happens to communities when churches leave?

I don’t agree with all of Carney’s argument, including his sense that Trump stirs more hope than anger at his rallies or his invocation of JD Vance. I especially disagree with his characterization that the secular Left “cheered” the decline of participation in churches. And I am unwilling to let white evangelicals who might have rejected Trump in the primary but voted for him in the general election or who defends him now off the hook. But it’s worth considering how churches–and other institutions that foster social trust–can be part of the solution to the problem that Trump has revealed.