What Does Liberty U’s Code of Ethics Look Like?

Michael Cohen, Donald Trump’s fixer, has acknowledged paying an IT firm to rig polls in favor of Donald Trump, with Trump’s knowledge.

The IT firm is owned by John Gauger. Gauger is the Chief Information Officer at Liberty University, the huge conservative evangelical Christian university led by Jerry Falwell, Jr., an early and ardent Trump supporter who recently said that he thought that everything Trump could ever do as president would only ever be good for America. The fervor of his loyalty has raised salacious rumors about blackmail–perhaps at the hand of Cohen himself. Still, Falwell is seen as a key player in the sale of Trump to white evangelicals, helping bring 81% of white evangelical voters to Trump’s side in the 2016 election. 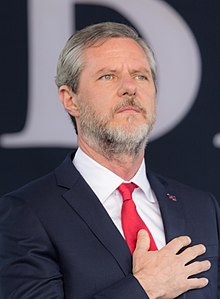 Above, Jerry Falwell, hand over his heart, probably pledging to do something awful.

I guess Falwell doesn’t think that paying someone to make polls lie in your favor is “bad” for the nation. Maybe he will think it is worse if the person doing it is an employee of his? Oh,  and Gauger is also a graduate, having earned an undergrad and an MBA at Liberty.

I guess business ethics was an elective, not a requirement?