Trump’s Hate is Honest and Strategic

In a recent post, I shared that, while Mitt Romney probably doesn’t like racism as much as Trump does, he’s willing to invoke it when he thinks it’ll rustle up white voters.

But there is more than hypocrisy in Romney’s recent Washington Post op-ed. There is consistency, too, with Republican values of racism (not just the language)–and that may be worse.

Romney will vote with Trump on a variety of terrible conservative policies, just like all the other Republicans lamenting Trump’s bad manners voted with him on the disastrous 2017 tax bill. He’ll support the appointment of indisputably ill-tempered sexual predators like Brett Kavanaugh to the Supreme Court even when other conservative options are available. (Romney specifically said during his Senate run that he would have supported Kavanaugh.) He’ll encourage “self-deportation” of immigrants–which just means making life in America so miserable for them that Haiti or El Salvador looks like a better options. (Heads up: the establishment of “virtual chokeholds” that make life unpleasant for immigrants will quickly bleed over to anti-immigrant hate crimes.)

That makes Romney just another Republican, and those of us not cheering on his op-ed are supposed to accept this limitation.

But I don’t find the same racist policies presented with fewer racist (and better spell-checked) tweets to be good enough. Romney’s critique that Trump–who, this entire time, has been clear about his racism, anti-Semitism, and sexism–has not “risen to the mantle of the office” is not really the issue. (Also, no, those words are not “scathing,” as if it is particularly brave or insightful or harsh to call a man who is proud of his racism racist.) As Romney says, the presidency is only partly about policies; it’s also about the public face of the nation. Romney’s op-ed lets us know he’s mostly cool with the meanness (I mean this both ways–the cruelty and the selfishness) of Trump’s policies, just not his word choice.

Don’t get me wrong: Trump’s language matters. It does real harm, just as funeral pickets by WBC do. But, ultimately, for Trump, the language is accurate: He’s the face of the Republican party, and he’s saying the racist, sexist, xenophobic, classist things that the party is trying to turn into policy.

Romney’s performance of statesmanship is frankly boring, though I know lots of Utahns who, needing to see themselves as good people even as they want to still be racist, sexist, xenophobic, and classist, will find it inspiring.

But, literally, it won’t be. Like, it won’t inspire the voters who like Trump’s policies but wish he were a little less honest about his prejudice to actually fight him when and where it matters, which isn’t in an op-ed but in Congress. 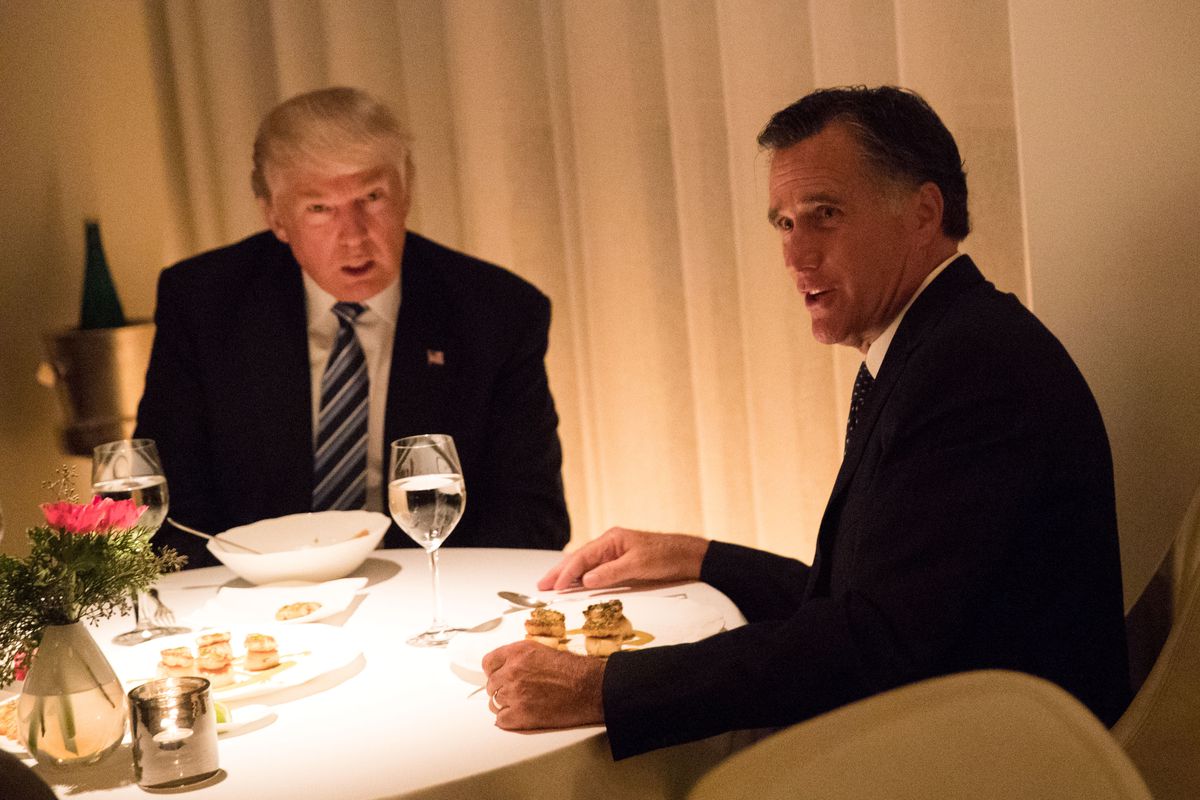 That look on your face when you knew your grandpa was racist, but you didn’t realize that his hearing had gotten so bad, and now the whole restaurant is glaring at your table. You’d just hoped for a free dinner, but now you’re worried that the Mexican waitstaff might spit in your food, and you know you deserve it.
Trump won more popular votes than Romney did, by a lot. In fact, Trump won more Republican votes than any previous GOP candidate. This is despite the fact that the Republicans have had a pretty stable platform for a long time: pro-gun, anti-immigrant, pro-war, pro-life, pro-business and anti-labor, anti-taxes, anti-gay rights, climate change skepticism… If, as Romney said, he and the president stand together on so many policy issues, why did voters so roundly reject Romney and, before him, McCain even as Trump captured a record number of Republican voters? We have to go back to 1980–almost 40 years ago–to find a Republican who wasn’t an incumbent or a VP who won the popular vote. American voters don’t want the garbage the GOP tries to sell us.

And yet Trump won–and that is because of, not despite, the things that Romney criticizes about Trump. Republican voters like the racist and xenophobic language. They were energized, not dismayed, by Trump’s bragging about sexual violence. They admire him for having an affair with a porn star. Imagine! She is usually paid to have sex with men with the world’s largest penises, and he is such a powerful figure that he made her do it for free! They love that he cheats on his taxes, and they will be thrilled to learn that he hired undocumented immigrants and gave them fake greencards and social security numbers to work for him. All of these are signs that he is powerful.

When the Republican party sells itself on its policies, no one votes for it, because its ideas are stupid. The only way it wins is by making it explicit that those policies are for the enforcement of white supremacy. (Also, gerrymandering and voter suppression.) Trump does that; Romney did not. One of those men is president now, and one of them is the junior Senator from Utah.