How many dead civilians were represented in the first row at George HW Bush’s funeral? 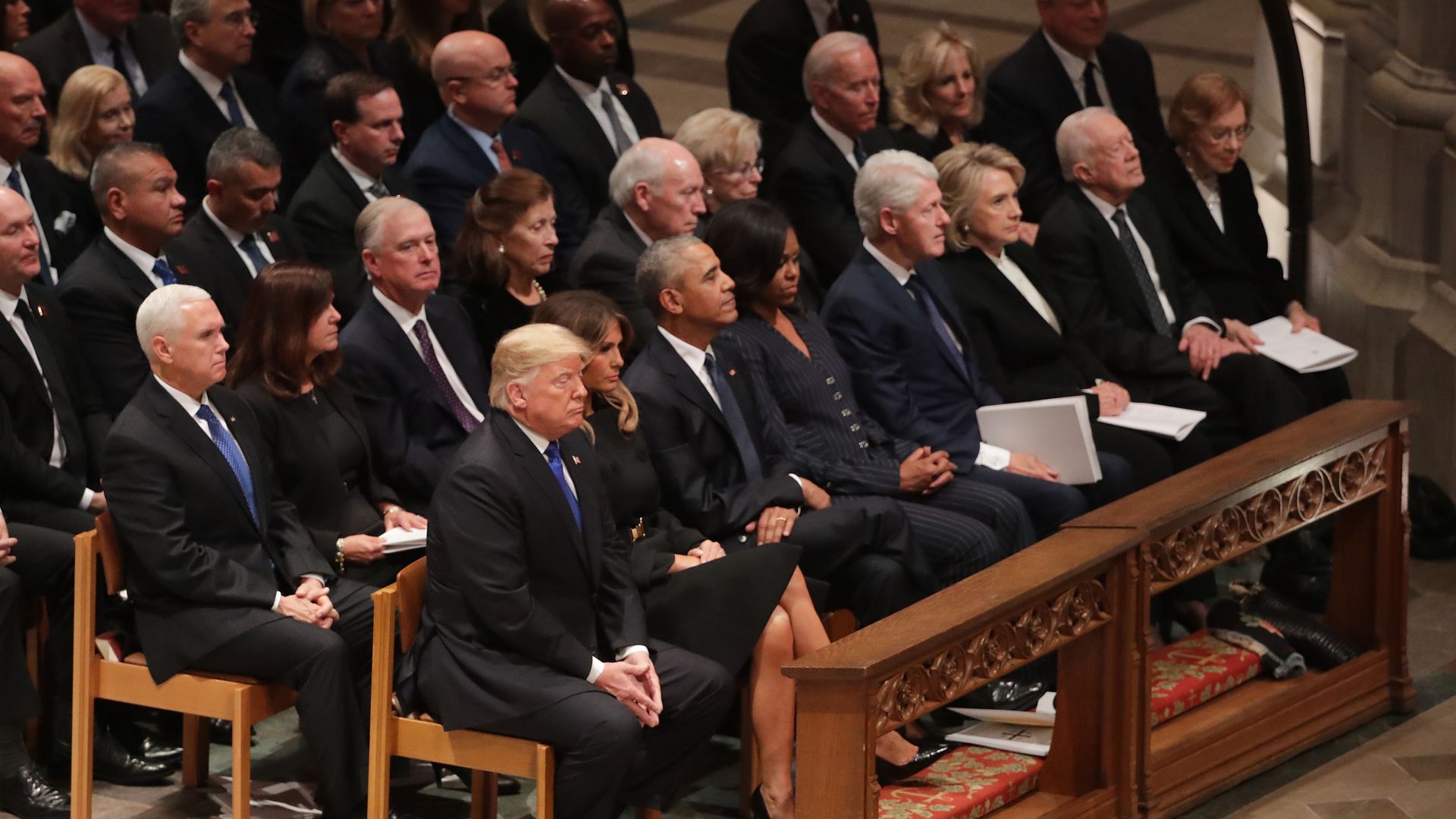 Above, mourners at George H.W. Bush’s funeral include all the living former presidents and their wives, plus Donald and Melania Trump.

This photo represents so much grief to me. So much death.

6,979 soldiers killed in the Global War on Terror.

383 soldiers dead in the Gulf War.

Smaller numbers of military casualties almost too numerous too count under Carter, Bush I and II, Clinton, and Obama.

And the bigger numbers:

200,000 indigenous people dead and 1.5 million more displaced in Guatemala in a genocide that began during Carter’s term; under his leadership, the US failed to sanction Guatemala as the nation began a campaign of terror against peasants. We supplied training for military leaders, and tanks from Israel, subsidized with US war money, were used in the violence there.

Approximately 200,000 people in East Timor were slaughtered while Carter’s administration provided funding and weapons to the Suharto regime, whose atrocities were well-documented

More than 600 Namibians in a refugee camp killed by a South African airstrike in Angola, and Jimmy Carter refused to call for sanctions against South Africa (still an apartheid nation at the time) in the UN

Afghanistan destroyed–and ready to embrace the Taliban as an alternative to western warfare–after the US fomented rebellion against Soviet forces there under Carter. (Oh, and one of the men we trained to fight the Soviets was Osama bin Laden. So this grief is not foreign. This photo reminds me of the lives lost on September 11, too.)

75,000 civilians dead–85% of them at the hands of the government–in the Salvadoran Civil War. Carter’s administration gave at least $5 million, plus training, to in aid to the government. Among those dead were priests working for piece, including Oscar Romero.

Note that Reagan, whose interference in Latin America is a direct cause of so much suffering today, isn’t even in this picture.

Those seeking asylum in the US today are fleeing from violence that the US fomented in our fight against communism and the War on Drugs in Latin and South America.

Approximately 200 Panamanian civilians were killed during the US invasion of Panama and Operation Just Cause under George H.W. Bush.

Estimates of civilian deaths during Desert Storm range from 2,300 to more than 3,600.

In the War on Terror, we have no idea how many dead, and we have no desire to know, because the number would be so shaming and would likely inspire more terrorism against the US. Maybe 4 million or more.

And, of course, at home: those who died of complications related to HIV due to government inaction during the Reagan/Bush years. Mass incarceration under Clinton. Rising hate crimes under Trump. 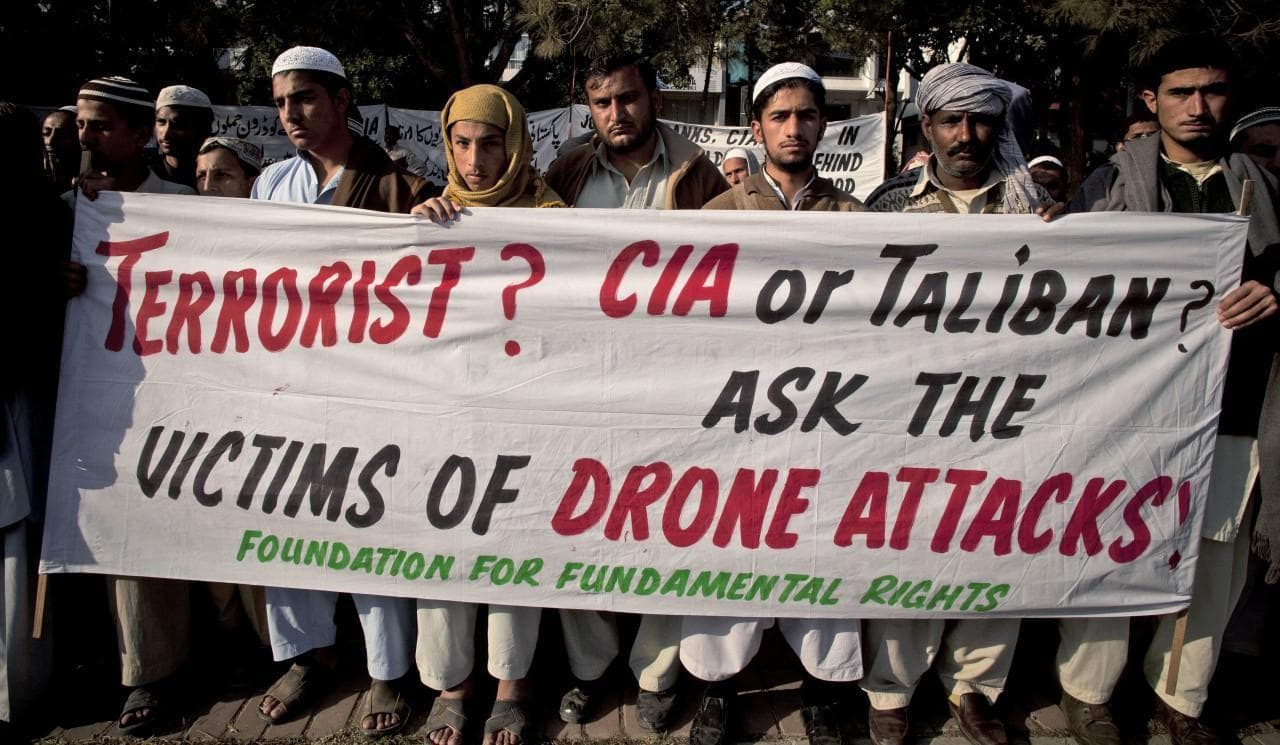 Below, Pakistani protestors remind Americans of the link between US-led killing of civilians via drones and terrorism. US presidents could care about human rights of the world’s most vulnerable people. If not, they are responsible for understanding that violence breeds terrorism, not security.

When a president dies, we invoke how “complicated” the presidency is. True. And you probably have to be a bit of a narcissist who is disconnected from reality to be able to withstand the pressure of getting the job. But it’s not “complicated” to engage in warfare that takes civilian lives 90% of the time.

When we say “complicated,” it could just be that we mean, “I’m scared of thinking about a world in which the US would not be able to destroy the entire world. I’m afraid of the work it would take to create a more just world. I am so scared that I’d rather elect a future war criminal than to work for peace. I’d rather send my children off to war than have to make peace on their behalf.”

I’d trade four living American presidents for the millions of brown-skinned civilians whose deaths they caused. In an instant. Of course. And so would the millions of enemies we made worldwide through our violence.