In advance of the midterm elections, Christianity Today has published a defensive take-down of the claim that 81% of white evangelicals voted for Trump. Using research from LifeWay, the research arm of the Southern Baptist Convention, and the Billy Graham Center Institute at Wheaton College, they aim to “debunk” a claim that is a either a demonstration of white evangelicals’ unity around conservative politics or support for a sexual assaulting, porn-promoting conman, depending on how you feel about Donald Trump.

But LifeWay/BGCI want to break this down farther by arguing that:

I don’t doubt these statistics. My quarrel with the LifeWay/BGCI research is that the research team tries to break down evangelical into two different categories: those who self-identify as evangelical and those who hold evangelical beliefs, defined by the National Association of Evangelicals and LifeWay. To qualify as an evangelical theologically, respondents must agree or strongly agree with all of the following statements:

The problem of nominal evangelicals is one built into evangelicalism, I think. If the only thing that matters is that people “call upon the name of Jesus” and get saved, then putting up numbers–getting people to pray a sinner’s prayer and call themselves saved–is good enough. Discipleship comes to be seen not merely as an afterthought but as an impediment. And that suits the politics of evangelicalism, because discipleship–walking the path that Jesus, a homeless, brown-skinned refugee who was a victim of the death penalty, forged–doesn’t lead to conservative politics.

Because evangelicalism’s core tenets (as outlined by the NAE) make few demands on believers, evangelicalism is pretty much nominal by definition. You have to believe in the Bible, believe in substitutionary atonement, and believe that people who don’t believe in this are going to hell. You should encourage other people to believe this, too, but Mormons and Jehovah’s Witnesses are far more demanding of their people than are evangelicals in terms of translating that belief into action. To be evangelical, nothing  is required except to say that you’re saved by Jesus’ death. Combine this with, in some parts of the country, intense social pressure to be evangelical (and social sanctioning if you aren’t), and it’s no wonder that so many people self-identify as evangelical but don’t have much depth to their faith. It’s a faith without much depth–and that’s on purpose. 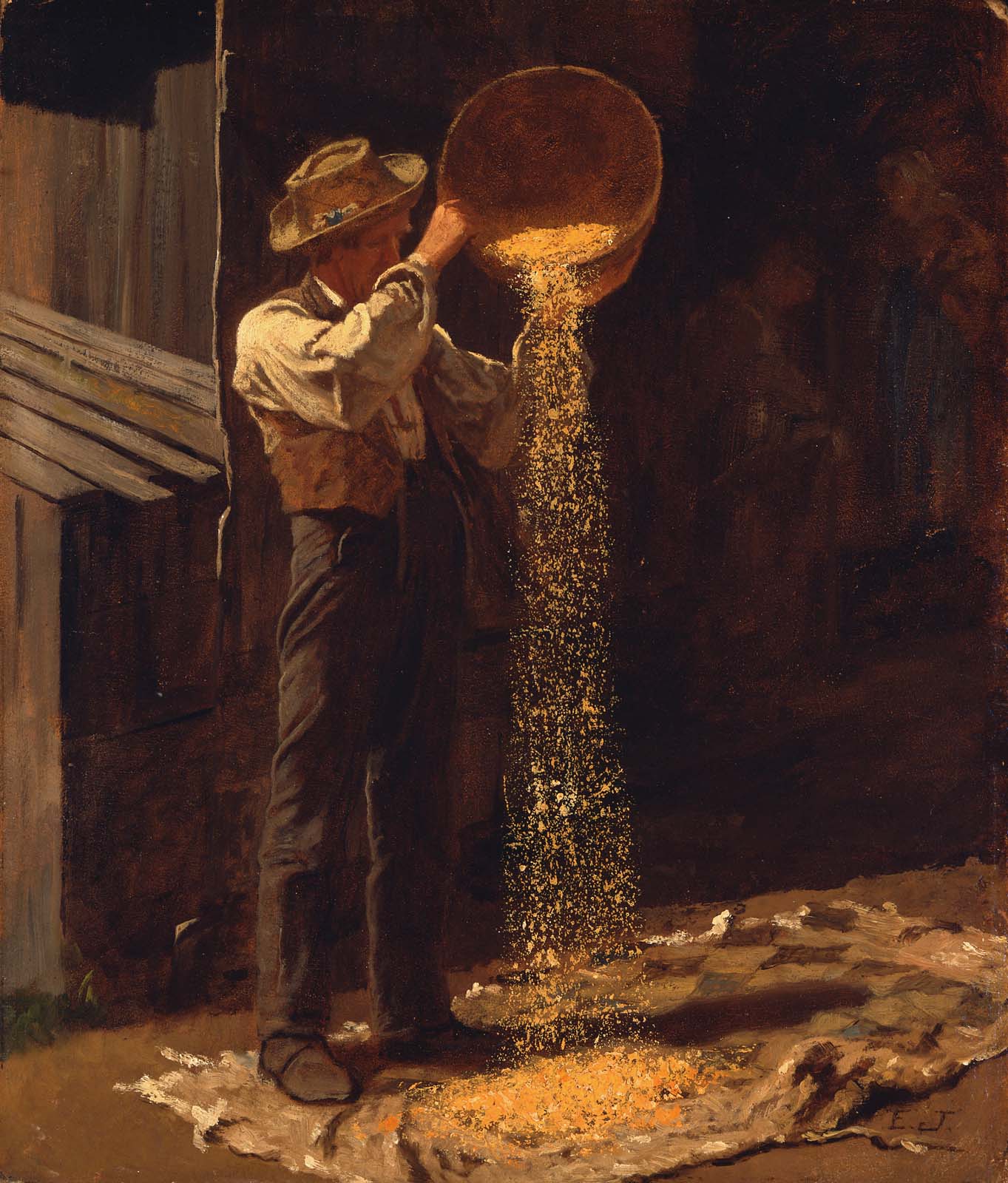 Above, Eastman Johnson’s Winnowing Grain, from the 1870s.

Evangelical researchers want to invent a difference between the chaff and the wheat because then they can blame the chaff for Donald Trump. Ever since that 81% figure was first published, they’ve been trying to explain it away by saying that those voters either didn’t really vote for Trump (Instead, they were just voting against Clinton or for some policy position.) or that they aren’t really evangelicals. And it’s easy to see why they want to make this claim: about 4 in 10 non-evangelicals think that the best word to describe white evangelicals is “hypocritical.”

But this isn’t just an image problem, and it’s not just a problem for nominal evangelicals who voted for an adulterer so that he could force their sex rules on the rest of the nation. It’s also a problem for theologically-informed evangelicals who are making use of the power their co-believers have given to Trump. Even if the evangelical chaff drove Trump to victory, the wheat are also benefitting. They don’t then, I think, get to deny the brethren that got them in to power.