I’m been drawing from the story of the Persian emperor Cyrus for understanding white evangelical support for Donald Trump for some time now. Cyrus is the figure that some Christians have turned to justify their support for Trump, as I argue in a new article in Humanity & Society (available now in academic libraries). Cyrus wasn’t a Jew, but, as told in the books of Ezra and Nehemiah, he extended Jews living in diaspora the opportunity to return to Jerusalem and rebuild their temple. Indeed, he opened his treasury and gave them items that the Persians invaders had taken from the temple generations before and supported them in their journey. He became a hero to the Jews. Here is how he is described in Isaiah 45: 1-3:

Thus says the Lord to his anointed, to Cyrus, whom he has taken by his right hand to subdue nations before him and strip the loins of kings, to force gateways before him that their gates be closed no more: I will go before you levelling the heights. I will shatter the bronze gateways, smash the iron bars. I will give you the hidden treasures, the secret hoards, that you may know that I am the Lord.

We’re talking about real power here! God is with him, even though he’s not really with God. God uses him to push everyone who gets in the ways of the returning Jews out of the way so that they can reassert their claim on their ancestral land.

No wonder some Christians are so eager to see Trump this way. If he’s not a Christian, they don’t have to explain away his immoral behavior, but if he is their Cyrus, they still get the power that he will deliver to them–including the power to push aside anyone who challenges their claim to be the original owners of America.

But there are other Cyrus stories, too. One appears in a book of Daniel shared by Catholics, Orthodox, and Episcopalians but not accepted by Protestants and Jews. In the story of Bel [Baal] and the Dragon, Daniel is serving in the court of King Cyrus. Cyrus asks his Jewish confidant why he doesn’t worship the Persian god that Cyrus adores (He visits the altar to Baal every day.); Daniel responds by saying he worships the only living God, not deities made of bronze. Cyrus insists that Baal is alive, as evidenced by the fact that the food he places before the idol every night-12 measures of wheat, 40 sheep, and 60 vessels of wine–is gone in the morning. Daniel cannot suppress his laughter. Here is how the story is told in the Revised Standard Version, Catholic Edition:

The king said to him, “Do you not think that Bel is a living God? Do you not see how much he eats and drinks every day?”  Then Daniel laughed, and said, “Do not be deceived, O king; for this is but clay inside and brass outside, and it never ate or drank anything.”

Laughing was probably a bad idea, as any good court evangelical knows. Cyrus demands that his 70 priests–the ones who, along with their wives and children who live at the altar, enjoy all that sheep and wine–explain the situation. He comes up with a challenge: if those priests can’t prove that the idol is the one eating the food, they will be killed; if they prove that he is, then Daniel dies. The priests are unconcerned, because they have built a trap door beneath the altar, which allows them and their families to enter the sacred space and eat the king’s offerings.

Above, Rembrandt’s 1633 Daniel and Cyrus Before the Idol Bel [Baal]. The painting shows a stout, opulently dressed Cyrus directing his scepter to an altar to Baal (an idol of which appears in the background). Cyrus insists that the food and wine offered to Baal disappears each night. Daniel has to tell him the truth: bronze statues don’t eat. Behind them are the priests who maintain the deception.

But Daniel knows this, and he has a plan: he has his servants sift ashes all over the floor. When the king arrives in the morning, he finds that the doors have not been unsealed–but the food is gone. He shows the scene to Daniel, convinced that this means that Baal himself eats the food. Having proven that his god is real, he shouts, ““You are great, O Bel; and with you there is no deceit, none at all.” But Daniel draws his attention to the floor, where the footprints of the priests and their families can be seen in the ashes, coming and going out of the trapdoor. Embarrassed at being fooled, the king puts all the priests, their wives, and their children to death. 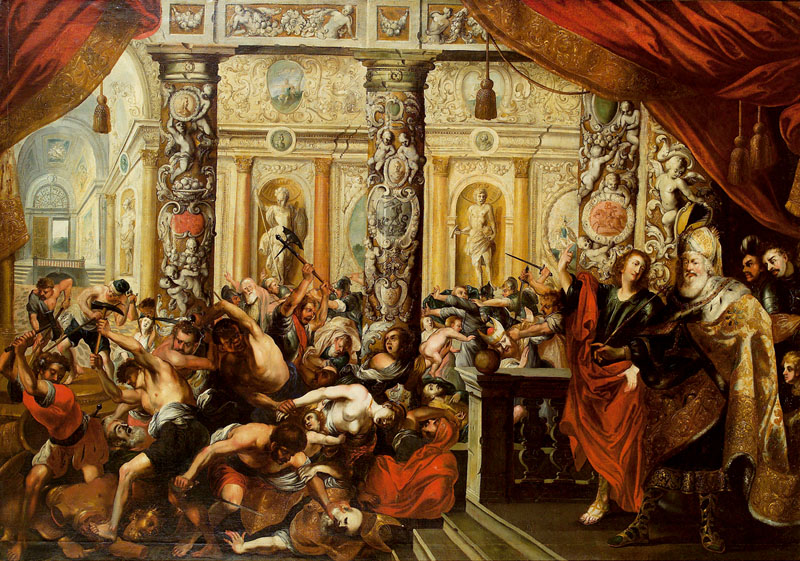 Stephan Kessler (1622-1700) Daniel and King Cyrus in Bel’s Temple. The king’s men slaughters the priests, their wives, and children–even babies!–with swords and axes, right inside the temple.

Now, as I said, this isn’t in the Protestant Bible that the white evangelicals and charismatics who support Trump are reading. But it is a story I wish they would read and apply to their understanding of Trump. Like Cyrus, he cannot stand being made a fool; like Cyrus, he feels humiliated when he is wrong; like Cyrus, his embarrassment-fueled rage is lethal. But at least Cyrus has Daniel, pointing out that his object of worship is dead; Trump has no Daniels in his cabinet of advisors, and we’re all stuck watching the best parts of our nation get sacrificed to his idols.