Highlights from _Believe Me: The Evangelical Road to Donald Trump_

I recently read historian John Fea’s Believe Me: The Evangelical Road to Donald Trump (Eerdman 2018) and found it to be a really useful discussion of some of the themes we regularly discuss here. I’ve shared a full review of the book at Reading Religion, but I wanted to share with 606 readers some quotations that I found really compelling:

On what many of us felt returning to church on the Sunday after the 2016 election: “But my emotions were less about the new president and more about the large number of my fellow evangelicals who voted for him” (6).

On coming to see Trump not as an anomaly but as a fulfillment of white evangelical Christian politics: “Over time, my distress did not wane, but my surprise did. As a historian studying religion and politics, I should have seen this coming” (6).

“The social and cultural changes of the Obama presidency–particularly regarding human sexuality–happened so quickly that conservative Chrsitians had very little time to process what they believed to be an erosion of the moral foundations of their nation. in this state of panic, evangelicals saw Trump as a strongman who would protect them from the forces working to undermine the values of the world they once knew” (7).

“Trump… was appealing to a different kind of evangelical voter” (33).

On white conservative evangelicals in the US south, their use of scripture, and their failure to be anti-racist: “they failed to see how their literal views of the Bible contributed to structural racism in American life. White terror groups seemed to understand this better than the fundamentalists did” (108).

“the short history of evangelical fear is actually pretty long (112)

On why Christians need to resist nostalgia: “In the end, the practice of nostalgia is inherently selfish because it focuses entirely on our own experience of the past and not on the experience of others” (159). 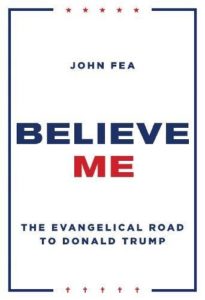 And two facts only tangential to Fea’s argument but that stunned me: