Fear of Women is Disqualifying from Public Service

One of the world’s most dangerous leaders, Donald Trump, said this week that the world is a rough place for young men–much rougher than for women–because they face the potential of false allegations of sexual harassment.

He’s not alone. Senator Lindsey Graham made a similar appeal to the persecution people of his demographics face during the Kavanaugh debacle last week, saying, “I know I’m a single white male from South Carolina and I’m told I should shut up, but I will not shut up.”

Thank God for Senator Graham, the Rosa Parks of our day, for his willingness to stand for the rights of the people who have always had a disproportionate amount of power–specifically white Southern men, whose votes the electoral college was actually designed to give undeserved weight to. It’s as Zora Neal Hurston said, “White men are the mule of the world.”*

But my point is that these two scaredy-cats aren’t the only people to feel very afraid. Overwhelmingly, white people believe that racism against them** is more prevalent than racism against people of color. Men tend not to believe that sexism against women exists. It’s almost like, if you have held unwarranted power for ages and used it to oppress others, any threat to that power, like changing demographics, makes you worried that your undeserved privileges might end.

These beliefs aren’t accidents: they are central to conservative rhetoric, which argues that since all people are created equal, any inequality that exists must be the result of individual differences, deviant bodies, or dysfunctional subcultures. Arguments against things like equal pay and affirmative action pretend a racial and gender innocence that just doesn’t match reality. A naïve person might call it utopian; a more realistic critic might say it’s exploitation of a value worth upholding–equality–in order to maintain inequality that benefits white men.

The consequences of this argument are just further discriminatory treatment of women. For example, remember in spring 2017, when we learned of the Mike Pence rule: the VP refuses to be alone with women who are not his wife. One reason is because he never wants to be accused of any impropriety. (That he could be accused by a man of impropriety does not seem to have occurred to him.) Who would accuse him? Of course, it could be the gossip-mongers who would might see him dining with a lady colleague, but the bigger fear is that the woman herself would make such an accusation.

Mike Pence is already living like women cannot be trusted not to accuse men of sexual assault. And it’s women who lose out. Being stereotyped as deceptive villainesses isn’t enough: we literally do not have access to men with power because of our bodies. Conservatives get to use our inherently deceitful natures, which we have because we are women, as the very reason why they don’t have to do business with us. 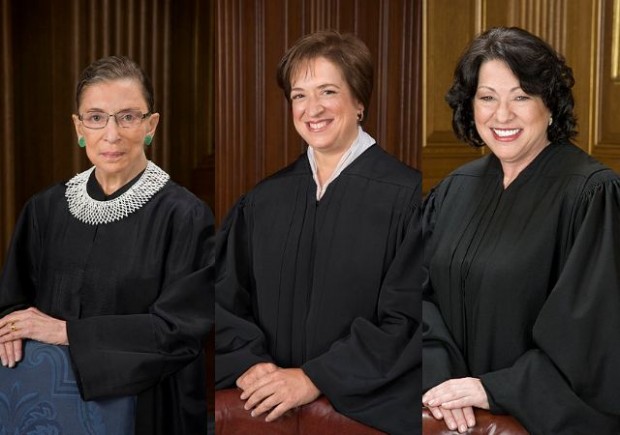 Above, the women of our Supreme Court. Only one woman has ever been appointed by a Republican President. Justice Sondra Day O’Connor was appointed in 1981, the first year of Reagan’s first term. Seven men have been appointed by Republicans since then.
If men cannot accept the incredibly small risk that women will make false accusations against them–a risk far smaller than them actually being sexually assaulted by another man (So Pence, if he were really concerned about sexual violence, would refuse to dine alone with another man.)–then they should not be in public service. The ability to petition our political leaders is foundational to democracy; it reminds those who serve that they serve. If you can’t be brave enough to take this risk, you have no business deciding when our soldiers should go to war. When our male leaders say that they can’t trust women, what they really saying is that they’ve found an excuse to exclude us from the conversations where decisions are made.

Also, I’m not sure how that’s going to go over with Justice Ginsberg, Kagan, and Sotomayor.

*No, no she did not. Go read Their Eyes Were Watching God to find out what she really said.

**Racism against white people does not exist. Racism is the combination of prejudice plus power. Because white people, measurably, have more power (overrepresented in Congress, for example), they cannot be the victims of racism.