Girls Know Early to Be Afraid

I was watching last week’s SNL skit featuring Matt Damon as Brett Kavanaugh. It hurt, because it almost wasn’t a parody, but that was what made it useful: this is really where we are, and most of the men in that room can’t see it, even though Rachel Mitchell and even a cardboard Alyssa Milano can. I’m not sure that the skit was funny, but I found it strangely affirming: like, yes, it’s not just you and your coven of witches who see this pattern of behavior. It’s exactly what a court jester is supposed to do.

Anyway, just as Matt Damon was crying about his calendars and his good times with Tobin, Squi, and Donkey Dong Doug, my 11-year-old daughter walked into the room. I turned the clip off, which only prompted her question: What was I watching? She’s a fan of political satire (Watching her older brother wait for her to get home on Mondays so they can view Last Week Tonight together is an unexpectedly heartwarming scene. And I think that Randy Rainbow might be a member of our family now.), so I told her the light version, though it’s rather impossible to avoid her knowing about the sexual assault stories that come out of the Trump administration.

[Side note: What is the weekly Scholastic Reader even writing about these days? Can they go 4 years without mentioning the president? Because, really, you don’t want the kids to go home and Google his name.]

She’s a smart kid, so she asked the obvious question: How many boys behave this way?

I say that that is an obvious question, but it’s not one we ask. We don’t want to know. But she is now in junior high, when parties start and some kids become sexually active, and it’s really important that she know: in a room of 10 boys, how many of them would sexually assault her if they could?

She didn’t ask it that bluntly, but that’s the kind of math we ask women to do every day. What are my chances? What is the ratio of men to women at a party where I can feel safe–that at least some of those women would intervene if I needed help? When do we still stand a chance?

I didn’t have a good answer. I shuffled the conversation to stress that most people are good people–it’s just that you can’t tell which ones are from looking at them. A person might seem safe, but tricky people try to seem safe. That’s part of their trickiness.

“But just because some people hide it doesn’t mean everyone does,” she pointed out. Then she named names: “Remember that kid Chandler* from 4th grade? He’s that kind of person.”

I did remember him, both from stories she told and the time I’d spent volunteering in her classroom. And she was right. He was exactly that kind of kid. Even at 9, he was that kind of kid. He was wealthy and white and spoiled, but this went beyond indulging his own desires to hurting others. He once won a class contest and got to chose a prize: he picked a Barbie, then mutilated the doll at recess. Why not leave that prize in the prize box for a child who wanted it to enjoy–especially since it was more expensive than many of the toys some girls in the class could afford on their own? When my daughter asked to teacher to intervene–after all, watching the child carve off Barbie’s breast, gouge out her eyes, and rip her limbs from her torso was pretty upsetting–he told her that this toy now belonged to Chandler and the child could do what he wanted. That the child wanted to send a message of violence to the girls in the class didn’t seem to matter. That was the grossest of his behaviors, but stories about his misogyny came home regularly. At the same time, he was well-liked by the boys in the class. He wasn’t a nose picker or scab eater. He was always well-dressed, and his parents were both active in his life. He wasn’t marked as an outsider or a weirdo.

And that was the hard part: He’s not the kid mutilating neighborhood cats, listening to shock rock, or writing sad poems about his parents’ divorce. He’s a handsome kid who wears cool brands of clothes and goes to Disneyland each fall break. He’s the kid being cruel to girls while grown ups look the other way because it’s funny to him. The first kind of kid, we’re told, turns into a serial killer. The second kind turns into a future judge. My daughter identified him “not hiding” his potential for misogynistic violence despite the fact that he looked not just typical but excellent–handsome, well-kept, with a stay-at-home mom who picked him up each day in an expensive SUV before taking him to martial arts or baseball practice. 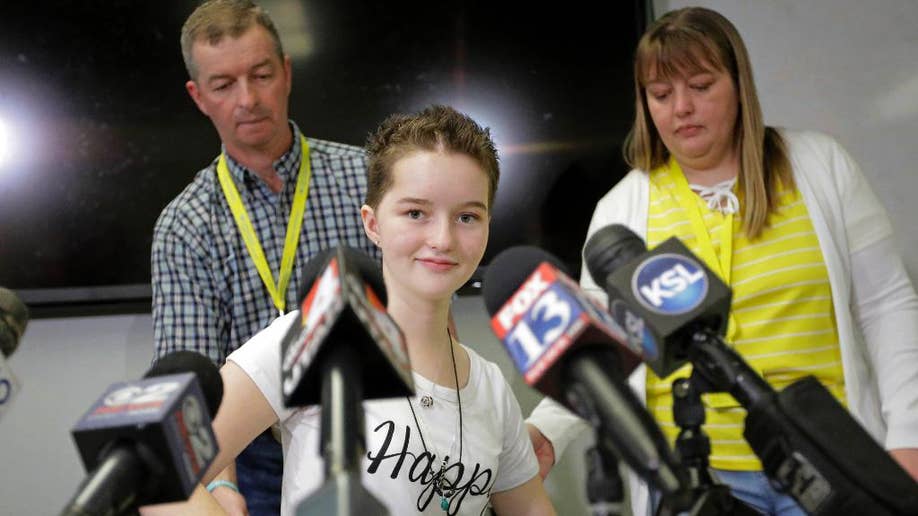 Above, Deserae Turner appears in public for the first time since she was shot by two boys. Turner was just 14 when two older teen boys lured her to a canal, shot her in the head at close range using a gun stuffed under a mattress and thus accessible to them, and left her for dead. Their reason? They didn’t like her texting them. The bullet remains in Turner’s brain, causing her pain and lifelong suffering. Her shooters have been sentenced to at least 15 years in prison. The mother of one asked the sentencing judge for mercy, saying that the boy had been reared in a good home and taught the difference between right and wrong. Maybe that is so–but, especially in Utah–it’s not always clear that misogyny is wrong.

I’m not saying that Chandler or any other child has his destiny set before him. I don’t think he has an inborn attraction to cruelty. I do think that he lives in a society that evaluates boys’ meanness to girls as a sign of their masculinity. He’s not doing something deviant; he’s conforming, even now–showing us that he has what it takes to join the ranks of Men with Power.

And my daughter saw it, too, and even though she transferred out of that school (in part because of the sexism–not just Chandler’s but the overall sexism of the place, which most worried me not in the children’s behavior but in the teacher’s acceptance of it), she kept it in the back of her mind: there will be other Chandlers, and she needs to know how to look for them now.

*Not his real name.