Back-to-School Reminder: Children will die by gunfire in American schools this year.

School is back in session, which means it’s time to start writing about mass shootings again.

Does that sound cynical? It can’t be any more cynical that Mitch McConnell’s claim that the federal government can do nothing to prevent school-based gun violence.  It’s a “darn shame,” too, he said, but what can the most powerful form of government in the US do about a problem that worries every parent and child and teacher and librarian and coach and janitor and principal and school resource officer?

We’ve written about school violence and guns and the politics of the Second Amendment. Still, it’s tempting–a relief, really–to come back around, a generation after Columbine, to the idea that good people can disagree on guns. Because otherwise we have to say something else: that people who own guns are bad in some way. That they don’t understand the science of guns (Having one makes it more likely that you’ll kill or be killed by one, which is so obvious that it hurts to have to explain it.) or violence. That they are selfish, because they are willing to pass on real bodily risk to others so that they can feel better. Instead, we make excuses for them because it can’t be that our fellow Americans are so enamored of their guns that they would insist that dangerous people have access to them. We decide we can live with them. We want to present ourselves as moderate, kind, reasonable people who can recognize the validity of someone else’s differing opinion. We don’t want to embarrass ourselves with an excess of emotion about guns. We don’t want to be accused of being scared or hysterical (with the sexist implications of that term), and we don’t want to be mocked for being cowards.

I was recently reading an issue of a big game hunting magazine. (I try to devote my doctor’s office reading to things I wouldn’t usually pick up.) The featured article was called “The War on Guns.” At no point in the article was there any recognition that it was smart to fear guns. Instead, those who support any kind of restriction on gun ownership were depicted as idiots who don’t know how guns work, wimps, and fools. Remember: this was a hunting magazine, where it would be entirely reasonable to recognize that there should be limits on gun ownership and use. Many cultures with strong hunting traditions have them.

But every time a child fires a gun, that gun has passed through the hands of an adult who thought they were smart enough, brave enough, and responsible enough to handle the gun. They weren’t. 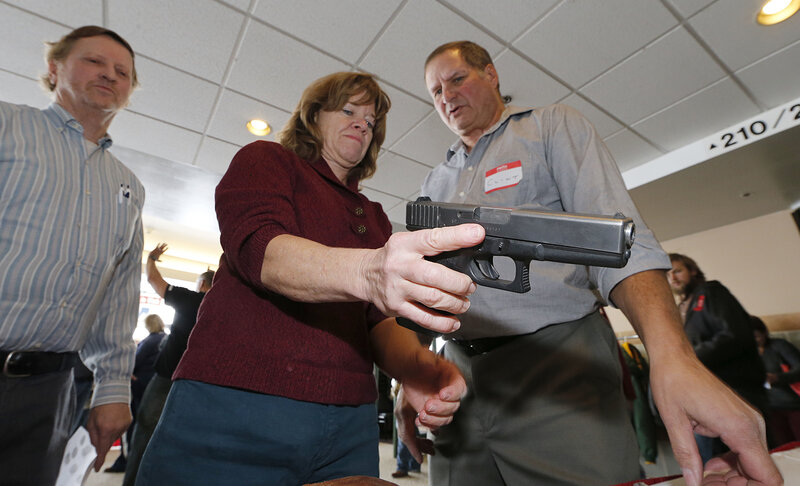 Above, a Utah teacher undergoes firearms training in 2012. In this state, teachers are permitted to carry guns in the classroom, and parents may not inquire about whether their child’s teacher is armed. Every time a “responsible” teacher brings a gun to school, children’s risk of death increases. How many 8th grade boys would it take to knock this woman down and take her gun? Photo by George Frey/Getty Images

And, as a consequence, children die.

And, for all the rightwing talk about “responsible gun ownership,” we don’t hold gun owners–the very people who say that are responsible enough to prevent these deaths–responsible for these deaths. We can’t even muster the will to take guns away from people who we know are mentally incompetent to stand trial but also violent.

I wish that that article was right–that we were in the midst of a War on Guns rather than a War on Schools, Kids, and Teachers (and journalists and movie goers and people eating at Waffle House).