Yesterday was Pioneer Day in Utah, which is a state holiday like none other I’ve ever seen.

It doesn’t celebrate Utah statehood (January 4, 1896) but the day when LDS pioneers moved from Emigration Canyon into the Salt Lake Valley in 1847. Mormons had previously settled in Nauvoo, Illinois, but  persecution led to the murder of founder Joseph Smith. Brigham Young then led a group of Mormons westward, searching for a new promised land. Many pulled handcarts across what become name as the Mormon Trail. And while non-Mormons also came west, the holiday has a particular resonance for LDS people here, who celebrate it by re-enacting pioneer days.

By 1869, when the transcontinental railroad was completed (the final “golden spike”  being driven at Promontory Summit, just north of where I live) and the pioneer era ended, more than 70,000 Mormons had come through–the first fleeing religious persecution in the US but, soon, converts to the faith from England and elsewhere. The high number of immigrants made this period one of the most largest human migrations in US history.

Every Utah kid past seventh grade knows the story, whether they are LDS or not: a sick and dying Brigham Young lay in the back of a wagon, near the end of a 1.300 mile overland trip. When the Mormons entered the valley, he announced, “This is the place.” They had arrived! The event is honored at the This is the Place monument and a heritage center where visitors learn about pioneer life and can practice some of the crafts of the period.

Across Utah, cities will host parades and fireworks shows, and businesses as well as public offices will be closed.

What if we celebrated more recent immigrants this way? 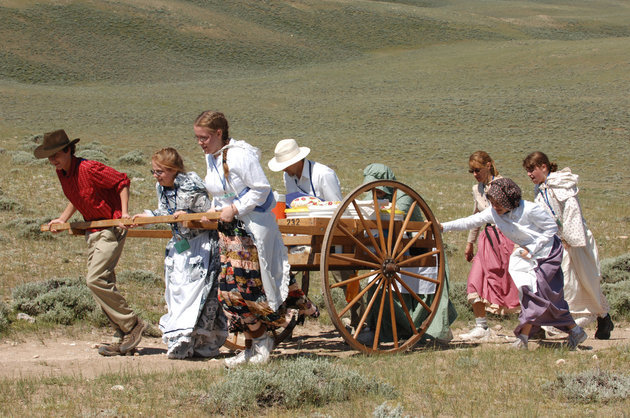 Above, people participate in a re-enactment of pioneer life by pushing a handcart.

Below, South and Central Americans, many of them unaccompanied children, ride “la bestia” (“the beast”)–freight trains that travel north, through dangerous weather and crime-ridden areas, to reach the US. Many lose limbs to the train, and the sexual assault rate is high.  Image by John Moore for Getty. 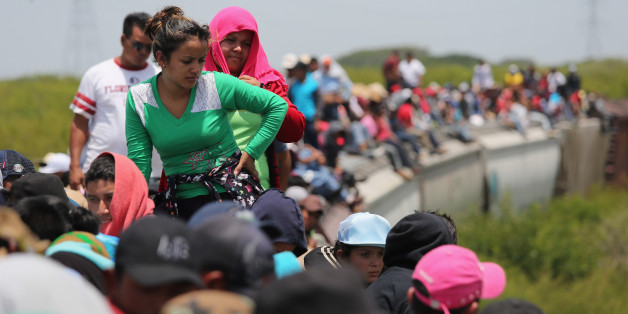 Mormons (and Mennonites… and everyone who voluntarily came to this country, despite the danger of the journey) should feel as positive about immigrants, refugees, and asylum seekers coming to the US today as we do about those pioneers. More so, in fact, because, for many our us seeking religious freedom, we had the option to stay where we were and give up our faith (so, not a truly free choice, but a way to stay alive). In contrast, people fleeing violence in Honduras or Syria can do nothing to save their lives except escape.

They choose a dangerous, difficult journey for their children because they have no option except the risks before them. Those Americans who condemn them as irresponsible parents for bringing their children across the desert or loading them onto overcrowded boats may not know the names of their own ancestors who died on the trip here: So many people died in the Roanoke Colony that we call it the “Lost Colony.” Nearly half those who came on the Mayflower died in the first winter here. Between 20,000 and 40,000 of those who headed west on the Oregon Trail died.

Mormon pioneers faced a similar difficulty: Two units of Mormon immigrants, totaling 980 people, unwisely left too late and were caught in an unexpectedly early snowstorm. Mormons who had already arrived in Utah–some of them only days before–turned to go into the face of the storm to find their lost brethren. Bringing supplies in two hundred wagons, they found the lost parties in the blinding storm in the Rockies in central Wyoming. About 230 people died in the event–about 1/3 of the pioneers in the two lost groups.

The story is quite Biblical: the pioneers who left late were foolish, but their co-religionists searched and searched for them anyway.

Imagine if we sought the safety and well-being of all immigrants, asylums-seekers, and refugees as those Mormon pioneers did, if we searched for each child separated from their parents by the Trump administration like the widow searched for the lost coin or the shepherd for his lost lamb.