I’m as repulsed by Trump’s behavior during the marionette performance that was this week’s joint press conference with Vladimir Putin, but I’m not pinning any hopes on it making an real change. Here are five reasons why: 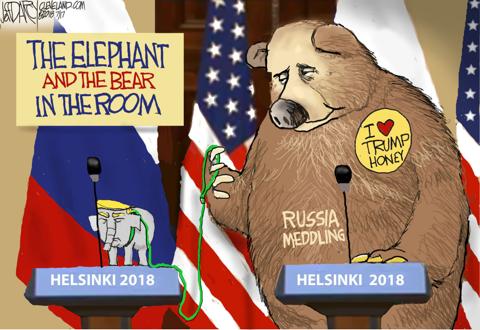 Above, Jeff Darcy’s political cartoon for the Cleveland Plain Dealer shows a giant bear and a tiny elephant behind two podiums labeled “Helsinki 2018.” The bear wears a pin that says “I <heart> Trump Honey” and holds a leash that rings the neck of the elephant, which has a squinty face and blonde hair. The cartoon is labeled “The Elephant and the Bear in the Room.”

One of our favorite family car games is to play an alternate reality game: one person poses a historical counterfactual, and then we imagine the consequences. (Our family’s love of history and foreign policies has occupied us for thousands and thousands of miles.) What would have happened if Truman hadn’t dropped bombs on Japan? If Reagan hadn’t intervened in Nicaragua or had supported the Sandistas? If George HW Bush hadn’t invaded Iraq? If Robert Mugabe had stepped aside earlier? To that list, we are adding the question: What would happen if the US had had a fair and trustworthy election in 2016? If Republicans had voted for nation over party?

*I want to see Trump collaborators in Congress saying no to Trump now: strong words from members of Congress who are willing to step forward and say, “I was wrong to support him, and I will no longer do so, and I will make it my goal to prevent his re-election.”  I’d love to be wrong, but I would put money instead on Republicans working hard to ignore this.