No, really, let’s take guns away from people.

Students from Parkland, Florida were in Salt Lake City, just down the road from me, this weekend. Coming here is particularly brave because a Utah is an area where it’s very difficult to talk about guns reasonably. Last year, the 4th grade field trip was to the Browning Gun Museum–with no warning to parents that this was on the agenda and no concern, at all, for children who have been traumatized by guns.

Oh, and then there’s the Utah Gun Exchange, a local gun shop that follows the students ACROSS THE COUNTRY in an armored vehicle with a mounted replica machine gun, which makes actual machine gun noises so the only way you know you aren’t being fired upon is because you aren’t being hit with bullets. (Read that sentence again and ask yourself whether this is what “freedom” means.) When the Parkland students announced they were coming to Utah, Utah Gun Exchange encouraged ever gunhumping asshole they know to show up. The situation became so scary that the movie theater the students had originally reserved for the event backed out, citing safety concerns. 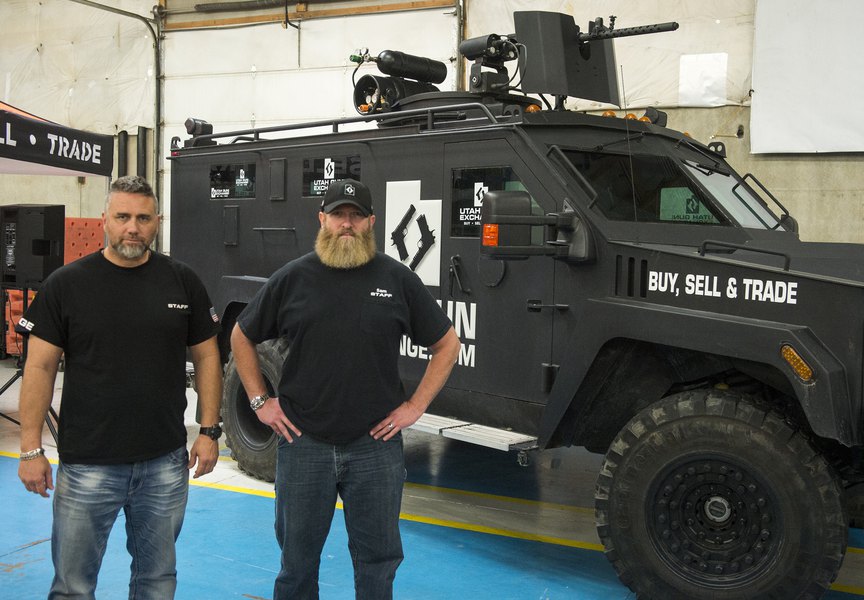 Above, cruel people with no sense of empathy for children who huddled in school supply closets, the dead bodies of their friends pressed against them as they waited for the Parkland shooter to… what? Be killed by a “good guy with a gun”? Commit suicide? Fire the thousands of rounds of ammunition that people are allowed to stockpile in the US?

Here is the paradox of gun ownership: if you are responsible enough to insure that a gun is safe, you will not own one because you understand that guns are never safe. You can never insure that they won’t fall into the wrong hands.

I wish every gun were gone.

It really is that easy, which is much easier than you might think. Though both gun owners and non-owners overestimate gun ownership (and gun owners overestimate it even more), the real rate is between 20-30%, according to research by KU’s Mark Joslyn and Don Haider-Markel. Most gun owners don’t own large arsenals.  Just 3% of the population owns half of all the guns out there. In other words, a few gun fetishists are stockpiling weapons, and while many feel that they should own one, the large majority don’t feel the need to own any. That leaves a relatively small majority to persuade to give them up.  Yes, 3% of them are really committed, the kind of jerks who open carry to Kent State’s graduation. But the very large share of Americans don’t own guns and do support gun control–and we have the power to do something about it.

Rather than giving Americans a blanket right to own any kind of weapon we want for any reason, as its critics lamented and its fans celebrated,  2008’s District of  Columbia v. Heller (which just had its 10th anniversary),the case actually sets up all kinds of reasons why the government can limit the right to bear arms. Heller specifies that the government can deny gun ownership based on both the owner (people with known mental illnesses, felons), how guns are transferred from owner to owner, where the guns are located (schools, hospitals), and even the kind of gun (“dangerous and unusual weapons”). In short, it opens up all kinds of possibilities for regulating guns “for traditionally lawful purposes.” And military-grade weapons are NOT part of our tradition.

Lots of good liberals, fearful of making a “clinging to their guns and religion” rhetorical mistake, have taken great pains to say that we’re not here to take guns.

But I think we should be. Heller gives us the option to take all kinds of weapons, for all kinds of reasons, from all kinds of people. And there are practical ways to make that happen.

We’re not likely to do that before school starts in September. But we can start to do it, by voting for candidates who don’t think we’re helpless in the face of mass violence, by how we vote this fall. And, to be clear, if a voter chooses to vote for any candidate, for whatever reason, who doesn’t support radical changes in our laws about guns, children blood will be on their hands when the next school shooting happens.