I’m unusually ambivalent about Baby Trump Blimp, the 19-foot Donald Trump-in-a-diaper balloon that has been approved to fly, while tethered, over Parliament in London when Trump visits next week.

Above, the balloon that will fly over Parliament. Pouf of blonde hair tops an orange face with white rings around the eyes. The mouth is open. Short arms and tiny hands stick out to the side, with one hand holding a cell phone (?). Baby Trump is naked except for a diaper. Photo by Reuters.

For sure, I hate the Trump-as-an-infant trope. This is both because I love babies and because I am concerned that talking about Trump as a baby shifts our attention away from the way he’s the quite-predictable adult product of a life of extreme privilege. “Rich white guy fails to develop any talents, lacks more compass, only acts in self-interest”–that’s not much of a new story. When someone as spoiled as Donald Trump DOESN’T end up as a narcissist monster, I’m more surprised.

A childhood photo of Donald Trump. He was reared to be an entitled brat, and–no surprise–it worked. Just one example: he had a paper route. When it rained, he was driven around the route in a limo by a chauffer. What kind of “work ethic” develops that way?

And it’s not like the world doesn’t know that, outside of Russia and North Korea, Trump is reviled by world leaders as well as every day citizens. While his critics decried Obama as an “apologist” who made the US a “laughingstock,” Trump actually kowtows to the world’s worst leaders, gives away American power, and is the butt of jokes on TV and in newspapers across the globe. So I’m not sure if a blimp is necessary to make the point. It will just deepen his loyalists’ devotion to him and further enshrine him in their minds as a victim.

On the other hand, who cares if they are offended? 90% of Republicans approve of him, though he is measurably the worst president in my lifetime. Will people who imprison infants be persuaded to look critically at their fascist leader whether we fly a balloon in their face or not? I don’t think so. Their story is written, and whether critics of Trump play into that by depicting him in unflattering ways or try more “civil” methods of discourse, we’re not talking about hearts open to change.

When I consult with communities being targeted by protestors, they often begin by asking, “How can we beat them?” That is, how can they “win” against protestors. That’s the wrong focus, I think–and probably my biggest task in this work is convincing them to approach the moment differently. Rather than focusing on “winning” against an opponent (whatever that means), focus on doing what is right for you. What are the actions that align with your values? What message do you want to send to your supporters? What are your goals? How will you know if you’ve done the right thing? If, in the end, no one changes their mind about the issue at stake, what do you want your actions to accomplish? After you figure this out, then you start thinking about the concrete actions that would work. 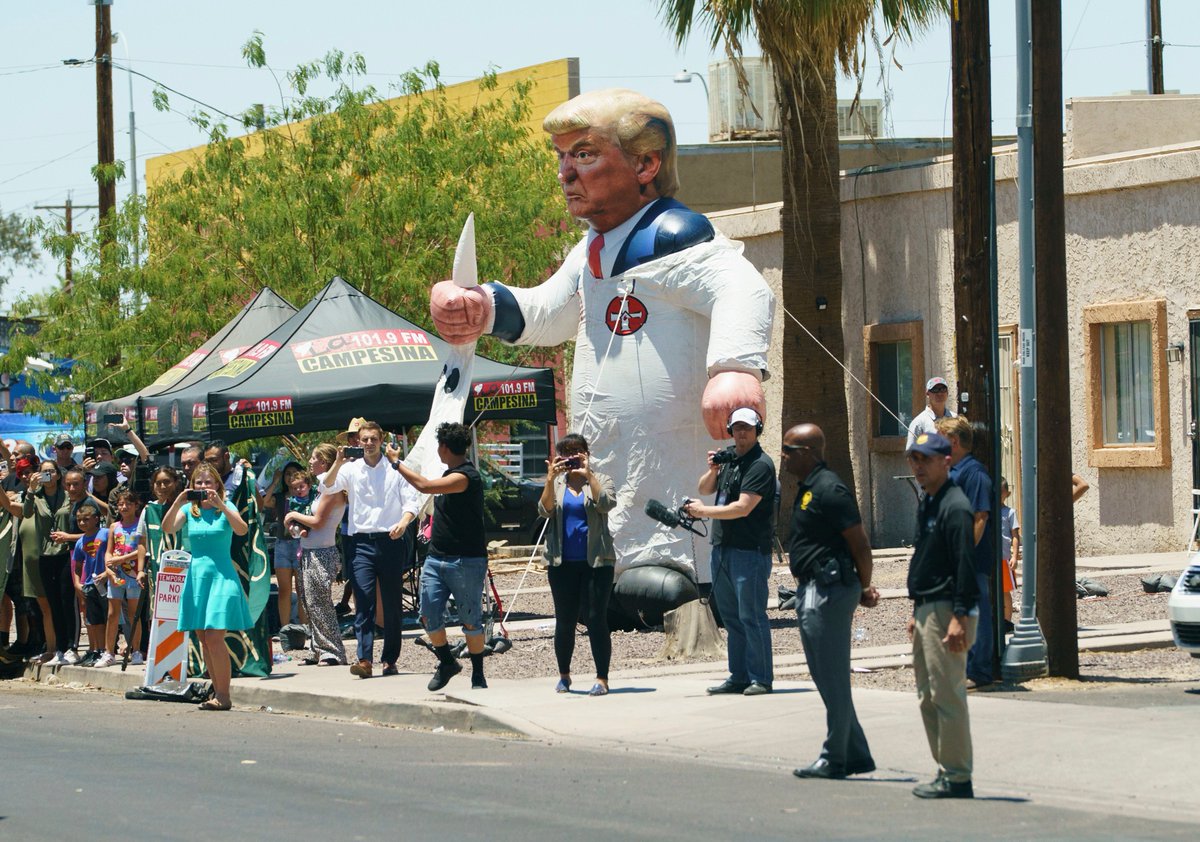 Above, protestors greet Melania Trump when she visits an immigrant children’s detention center near Phoenix. The protest featured a large, grounded inflatable of Donald Trump in a Klan robe, a Klan hood in his hands. Photo from AJ+.

Those actions may be ridiculing your opponent. I wish that the image used in ridiculing Trump didn’t use children as part of the gag (and, likewise, ridiculing his weight is ableist or the size of his penis is ableist and transphobic and thus unacceptable to me).