Some happy mail for a hard Pride Month

We write mostly about politics, a lot about culture, and a little less about family around here, so I’m bolstering that part of our mission statement by sharing these two photos: 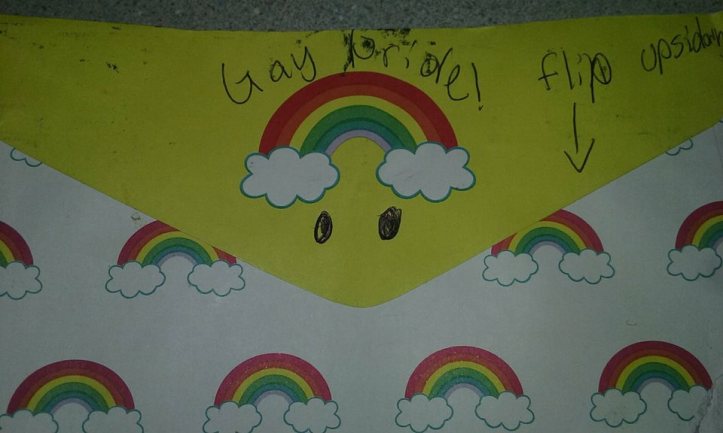 Top, the back of an envelope, with a small rainbow on it and the instructions “flip upside down.” When you do, the rainbow looks like a smile. The words “Gay Pride!” are scrawled on the envelope, too.

It’s the envelope that enclosed a letter that my daughter, newly 11, sent home to use last week from Girl Scout camp. She’d used up all her own stationary and so borrowed this cheery rainbow-festooned paper and envelope from a cabinmate, then re-visioned it into some Pride Month stationary.

Anyway, it’s a small thing, but, during this very, very hard Pride Month (with Masterpiece Cakeshop, the anniversary of the Pulse shooting, the retirement of Justice Kennedy, and more), it made me smile and brought me some small encouragement that the world IS different than it was just a few years ago. Yes, there are likely to be problems ahead, but there are people who love progress, too.