From the “Totally Foreseeable Consequences” file: a hardware store owner in Tennessee posted a “No Gays Allowed” sign in his store last week. He later replaced it with a slightly more polite sounding statement that the store “reserves the right to refuse service to anyone who would violate our rights of freedom of speech & freedom of religion.”

Yes, that is ridiculous, because the only entity that could violate your First Amendment rights is the government. Yes, it is stupid because the existence of a gay person or their choice to purchase a hammer and nails does not violate your right to religion or free speech.

But it is also entirely predictable that stupid, ridiculous bigots are emboldened by the Supreme Court’s recent cowardice in its Masterpiece Cakes decision. In that decision, SCOTUS reprimanded a Colorado state commission for its hostility toward religion when the commission heard a case in which a wedding cake baker refused to bake a cake for a gay couple on free speech grounds (that is, that the government cannot make him express–in the form of a custom cake–approval of same-sex marriage). SCOTUS stressed that the decision was narrow and that a different set of facts–one in which a lower authority didn’t mess up the case–could produce a different ruling, and we can hope that the justices will hear such a case soon. The majority opinion stressed the narrowness of the ruling, but within days, exactly what critics of the ruling predicted happened: “religious freedom” became a justification for refusing services to gay people. (Also entirely predictable: Jeff Amyx, the hardware store owner, is a bivocational Baptist pastor from East Tennessee. It’s like he wants to be a stereotype.)

Though Baptists, of all Christians, should have a robust sense of what “religious freedom” is, the Jeff Amyxs of the world aren’t really concerned about religious freedom but about the ability to control and exert power over others. If he–and the many others who will follow his lead–comprehended Masterpiece Cakes, he would understand that the Court made NO ruling on free expression or freedom of religion. Moreover, lawyers arguing for Masterpiece Cakes never argued that EVERY business should have the right to deny queer customers service; indeed, the baker at the center of the case said he would sell a same-sex couple an off-the-shelf cake but would not use his artistic skills in baking them a made-to-order on. Even if the Court found this argument compelling (which is not the case), that’s not the same thing as selling a gay customer a hammer. It’s not the same thing as building a gay client a deck or removing a fallen tree limb from a gay couple’s yard. Even if we accept the idea that cake decorating (or flower arranging or building a balloon arch or sculpting a unicorn out of ice or whatever other thing people want at their wedding) is art, I don’t think a court would accept that selling someone a nail gun is. Of all the hard questions before the Supreme Court, this isn’t one of them. 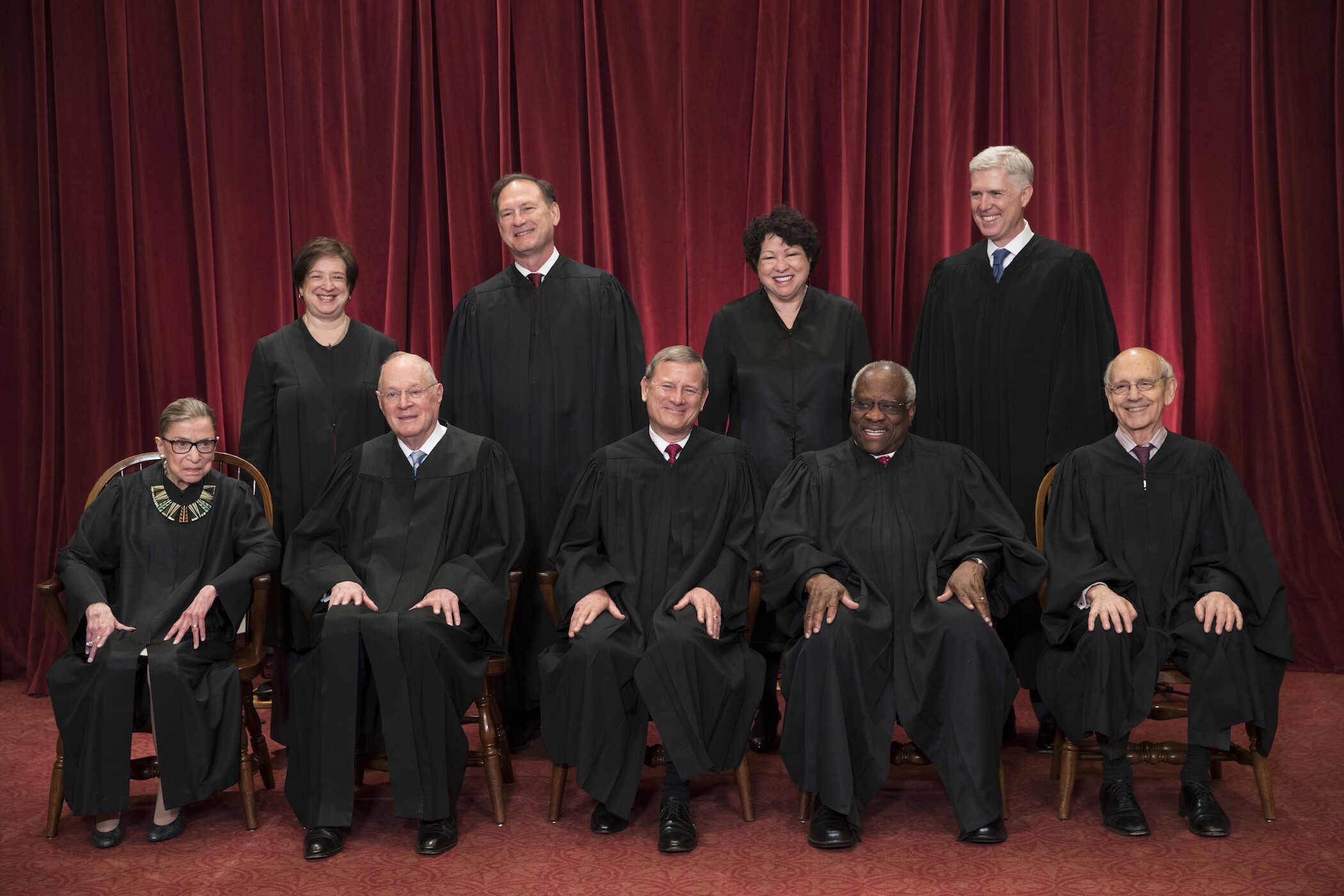 Above, your Supreme Court Justices, failing to rise to the occasion.

SCOTUS was both cowardly and reckless in making this decision. In 1955, when the Court was considering one of the most important cases of the century, Brown v. the Board, which made de jure school segregation illegal, it understood that if it made the wrong call–and if it made the right call but in the wrong way (that is, not unanimously)–the consequences would be dire, not just for people of color but for the nation as a whole. In that moment, we needed the Court to lead, and a divided decision or a weasly one–which is what Masterpiece Cakes is–would have signaled to the nation that the government was not committed to the idea that African American lives had dignity and worth, that they were inherently equal to white lives.

We are already in a moment when queer lives are under attack. After this past weekend’s Pride Parade in Salt Lake City, a mob of young white men chased four Pride participants into a cafe. An African American employee stepped forward to fight off the crowd, which was trying to push into the cafe, and was hit multiple times. Sadly, he reported that he has “been jumped like that before.”

When the Supreme Court sends the signal that religion is an excuse for bigotry, that bigotry only expands. There are plenty of people in East Tennessee, plenty of Baptist ministers in this world, who will use “religious freedom” to deny service to gay people–and also to Muslims and to people of color and also to women and also to immigrants and also to people with disabilities. The Christian “duty” to be homophobic is taught not just in small, one-off churches. That gay people deserve to be stoned has been vociferously taught in the multi-campus Brainerd Baptist Church outside of Chattanooga, a church now pastored by a former VP of LifeWay (the research arm of the Southern Baptist Convention) and a fellow at the Billy Graham Center at Wheaton College. That God will kill gay people is a teaching of the very active Faithful Word Baptist Church of Tempe, Arizona. Churches still post signs calling for queer people to be killed because “they do not deserve to live.”

Above, the sign outside of Ten Commandments Church in Milledgeville, Georgia says “Homosexuality is a death worthy crime! Leviticus 20:13.” Such hate is a religious expression when it’s on the grounds of a church. Why can’t SCOTUS find its voice to explain that private businesses, though, don’t have a right to demean the lives of gay people?

Masterpiece Cakeshop isn’t a decision in a vacuum. It happened in a context in which conservative Christians are aggressively seeking ways to discriminate. The Court had in front of it an opportunity to send the signal that such shenanigans wouldn’t be tolerated. It did just the opposite. No, no one will die because they don’t get a cake baked for them, but some people will die–at the hands of mobs, at the hands of medical personnel who believe they have a right to refuse to treat gay people, on the streets because homeless teens can’t be cared for by queer foster parents in some states–because homophobia has been emboldened.