Handing Gun Owners Over to Satan

I have decided to deliver such a one to Satan for the destruction of his flesh, so that his spirit may be saved in the day of the Lord Jesus.–1 Corinthians 5:5

This passage terrified me as a child–the idea that a church could gather and “deliver”–pick up, plunk down on a doorstep, ring the bell, and run away–a person to the Devil himself. I knew it had to be a community’s response only for the most intractable of sins (incest, in the case referenced, though I only ever saw it used against gay people, never against sexual abusers). At the heart of this process was still the goal of saving the person, so it was an act of love, but it was an act that recognized that the community was done with the person.

“Delivering such a one to Satan” was for people who professed belief yet who lived lives deeply at odds with the love of Jesus. It was the community saying, “God, we can’t protect this person from the consequences of his sin. Given that situation, let those consequences be persuasive to him now.” But as much as it is about saving his soul, it is also about protecting the community. This is the sailors carrying Jonah to Tarshish tossing the reluctant prophet into the sea and immediately feeling it calm. We know that God will rescue him, but the sailors don’t, and they are still justified, the story suggests, in their choice.

Mostly my experiences with this verse have been negative: a church creating a boundary where none was needed, using it as a mechanism for preserving purity when they should have been living in grace.

But I want to redeem it, because I think there is some wisdom to it, especially today, as more school children were by killed mass gun violence that could have been prevented had adults, ranging from the father of the shooter to the entire US Congress, taken action.

What if we “handed over to Satan” gun owners? That is, what if we allowed them to experience the full risk of their choices rather than the rest of us absorbing it for them? What if we said, “This is not a cost we will collectively bear”? If we treated them like the dangers they are? We could do this legally by demanding that they absorb the cost of gun violence through insurance and through harsh punishments for crimes committed with their guns. Every gun used by a child, after all, has been touched by adults who don’t bother to secure it, yet we call this gross failure “tragedy” rather than “predictable.” Let’s make it impossible for people to underestimate the punishment for the choice to allow children to take up arms.

What if reasonable people–those of us who don’t think own a gun (the large majority of Americans)–shunned them? If we said, “No, I won’t come to your home for a meal or play on your team or sit in your classroom, because your choices endanger me and others, and I love life too much to risk mine and others’ by bringing them close to you.” 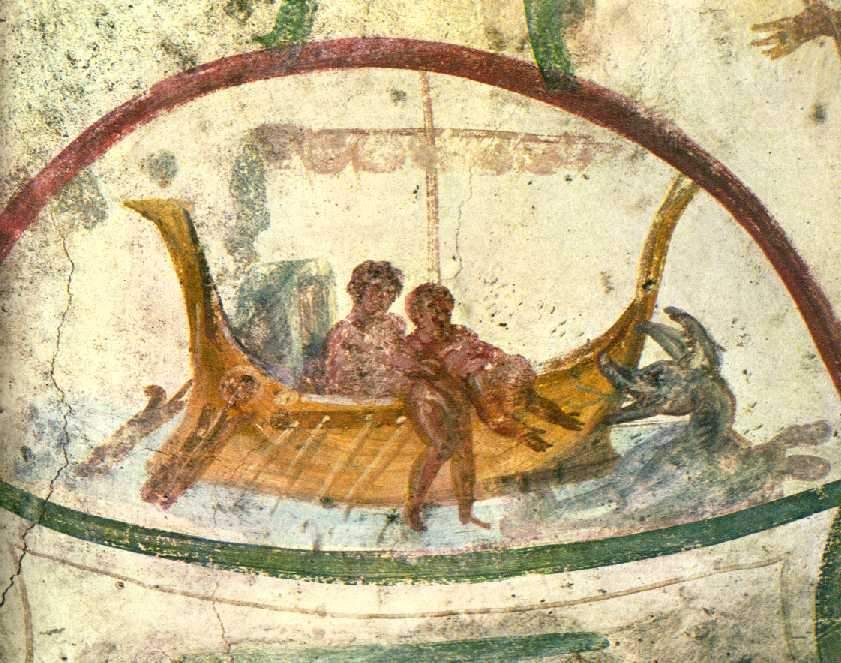 Above, an image from a fresco in the catacombs of Priscilla, in Rome, from 2-4 CE. The sailors were right: when people’s refusal to love others as God wants us to creates danger, you might have to act.

Even if just Christians did this, we might see a drop in violence. What if Christians agreed, “I won’t live in fear, and I won’t dwell in a relationship with someone who seeks security in lethal weapons. I love you, friend, but God calls me to protect people, so we have to be done here. I cannot love our relationship more than I love the lives of innocent people”? Certainly, our rates of violence would fall, both because Christians could not be perpetrators and because we would not be allowing our guns to be used against others.

What if we tossed gun owners* overboard like those sailors tossed Jonah?

*Yes, I mean gun owners. I don’t consider shooting sports enough justification for the risk that guns pose to people. The case for snake-handling in churches is more defensible. Christians have no business with shooting people in self-defense. And hunting for food or wildlife control can be done without storing weapons in your home or vehicle, where they are increased risk of being stolen. The rest of the world has figured this out.