Now, why did I even look at Matt Walsh’s nonsense Twitter feed?

Walsh’s website describes him as “one of the religious Right’s most influential young voices” who is “known for boldly tackling the tough subjects and speaking out on faith and culture.” Mostly, this involves taking the same old themes of the Religious Right–Feminism is bad! Being feminist means you hate men! Men need to be strong and women need to be soft!–and apply them to current events, like why it’s a against God’s design for humanity that Oceans 11 has an all-female cast.

[A husband] is challenged to live up to the respect his wife has for him. But if his wife parcels out her respect on a reward system, the husband will feel demoralized and empty. He will not feel at home in his home. He will not have the sense of masculine purpose and fulfillment that his family life ought to afford him. After a while, he will dread coming home at night, preferring to remain at work where his contributions are appreciated and his talents are admired. Now the marriage has entered a very dangerous place. If a man feels more like a man when he’s away from his wife than when he’s with her, disaster is right around the corner.

This isn’t “bold” new insight on marriage; it’s a rehashing of The Total Woman by Marabel Morgan, which encourages women to be sure to ask their husbands to do manly things (though we shouldn’t let men in on our scheme by asking him to open a jar smaller than a pickle jar–then he’ll know that we’re just flattering his ego), watch him do it, and then squeeze his biceps when he does a good job. Soon enough, she assures us, he’ll be out in the garage, pumping iron, just to get more of our praise.

It’s a tad insulting, this behaviorist approach to “training” a husband, but Walsh’s advice on marriage has just enough sense in it (Yes, both love and respect should flow easily in a marriage.) to be dangerous (just about everything else he says).

And here he is on Twitter this past week, arguing that men just don’t have enough space in our society. 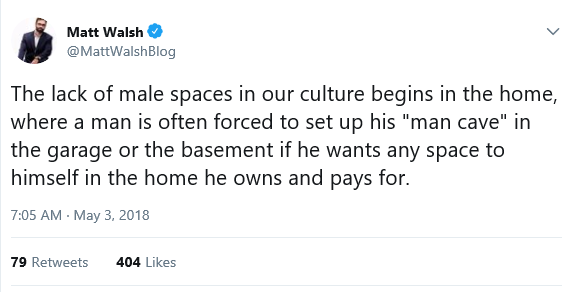 Above, Walsh’s tweet complains says, “The lack of male spaces in our culture begins in the home, where a man is often forced to set up his ‘man cave’ in the garage or the basement if he wants any space to himself in the home he owns and pays for.

1) Who else gets their own room in a family home? Why does Dad get his own playroom when the rest of us bunk up? How do I explain to the kids that the reason we didn’t have another child is because Dad needed that spare bedroom for his pool table?

2) Entitlement like Walsh’s is part of the reason why “family” homes have gotten so large even as families have shrunk. Now an “average” home in many places is well over a quarter of a million dollars. Know what would be awesome? If we valued children and families as much as we value a three-car garage. Also if  everyday families could afford a house. Also, if new builds weren’t all over 2300 square feet.

3) Which rooms belong to a wife? Do most wives have their own rooms and I don’t? Because I’d love to have my very own room!

4) Or does he mean that wives make all the decisions about the shared spaces in the house? Because, again, most women I know would LOVE to give up having to do the cleaning, organizing, etc. of common spaces in exchange for a room of our own! Put a taxidermied animal in the bathroom for all I care–as long as you are the one who scrubs the shower.

5) If a man can’t figure out how to negotiate shared space, perhaps he’s not mature enough for marriage.

Above, David Frizzell performs “I’m Going to Hire A Wino.” In one of my very favorite country songs ever, a poor wife addresses her husband’s failure to thrive as an adult male by redecorating the house to look like a bar, “So you’ll feel more at ease here/and you won’t need to roam.” She tells him, “We’ll take out the dining room table and put a bar along that wall/and a neon sign to point the way to the bathroom down the hall.”

6) When should men get to use their single use space? Like, how many hours a day does Walsh think men should be able to be not at work and also not contributing to the care and raising of children in the home or the maintenance of other household space and other people?

7) What is the cost per square foot per minute of use for such space?  Even a modest man cave or garage workshop or basement gym can add tens of thousands of dollars of cost to a house. Is his need for space just for him something that everyone in the family should have to pay for or sacrifice something else for? A backyard hammock, a nice recliner in the living room, some bubble bath (or, if you need something more manly, some Epsom salt) and a novel, or a pair of new running shoes and headphones all give him a chance to escape his family for far less cost.

8) Like oversized trucks and trophy wives, man caves are often about competitive consumption–signaling to other male primates that this guy can afford to waste money or a Kegorator or a foosball table. Of course, women make purchases to signal status to friends, too, but at least my KitchenAid stand mixer gets daily use. No, you can’t justify the expense of a larger TV as “hospitality” for your buddies.

9) Walsh wants to put the blame for men’s childishness on women, but this suggests that it’s easier to build a man cave than to contribute to family life or figure out how to fix a problem in your marriage. I suspect it’s more the case that some men want a playroom, so they create a narrative in which they (uniquely and unfairly) have no room in the house.

10) Gender conservatives like Walsh both want and don’t want dramatic gender distinctions. Walsh wants spends a lot of his writing reinforcing the gender border. For him, men need to be manly and women need to be feminine in ways that are very, very traditional.  But if you aren’t the one cooking and cleaning the house, maybe you shouldn’t have so much of a say as to how it is decorated.

Okay, despite all those criticism (and the many more our readers could add!), I, in a very small and sideways way, agree with very little bit of his argument.

Come back on tomorrow to read all about it.