Esther Koontz, the Mennonite woman who has challenged Kansas’ law that state contractors must agree not to participate in a boycott of goods made in Israel’s contested zones, may see justice for her case but not for others.

The law is very likely unconstitutional according to a federal judge. In response, Kansas has attempted to narrow the law. The new version would no longer apply to individuals, such as Esther. Instead, it would apply to companies with contracts of more than $10,000 that pertain to goods and services that are “integral” to Kansas-Israel trade or potential trade. That last part is pretty vague, but the whole thing is still unconstitutional. Very simply, that law may prohibit a state (including state contractors) from doing business with another nation–say, one we’re at war with–but it can’t prevent you from NOT doing business with them. That the law ONLY applies to Israel lets you know that the motivations are likely rooted in a very particular theology.

And they are. According to Republican state representative Trevor Jacobs, the state of Kansas must make it a Genesis 12:13 a law. In that verse, God tells Abraham, the father of Israel, “I will bless those who bless you and whoever curses you, I will curse.”  It’s a verse that pulls conservative Christians into unwavering support of all policies and politics of contemporary Israel. For many, this is just a superstitious transaction: We must approve of all that the contemporary nation of Israel does in order because, otherwise, God will destroy America. Talk about your “entangling alliances.” 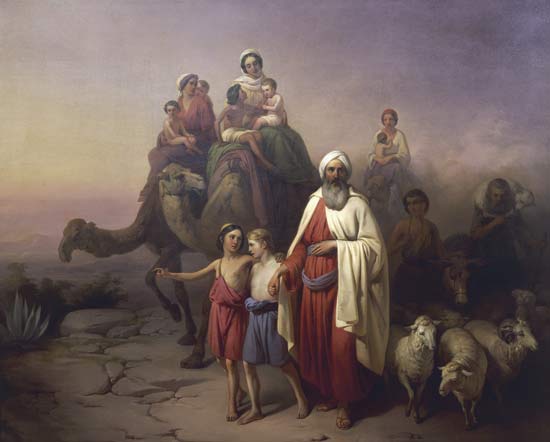 A key teaching in Christian nationalism is that, because God blessed Abraham as the patriarch whose descendants would form the nation of Israel, contemporary American Christians must never criticize the contemporary state of Israel.  Above, Jozsef Molnar’s The March of Abraham.

Letting Esther off the hook prevents further cases brought by individuals, but it doesn’t address the constitutional problem. Many Kansas lawmakers know this and would prefer to be spending their days serving their constituents by improving the daily lives of Kansans in ways that those people find meaningful (like school funding or not arming teachers). This law has little to do with the economic interests of Kansans and much to do with conservative Christians’ symbolic support of Israel (not, I’d argue, real support, for such Christians generally do not want or expect peace in the region, and many of them still fundamentally believe that the only good Jew is the one who will, eventually, convert to Christianity. It’s both pro-Israel and anti-Semitic.)