Here was are, a month out of the Parkland, Florida shooting and so, I think, a time for check-in: Are we parenting any differently? Being a different kind of stakeholder for our local public schools?

I’ve spoken before about the ways that on-campus threats have shaped my teaching.  K-12 school shootings are increasingly shaping my parenting.

I was sick early last week, so my husband had to do the early morning shift on his own one day. At 7:59, our oldest was already in first period at junior high when my husband woke me. He had a phone in one hand and was telling me, “G— has an emergency at school.” In a single motion, I grabbed the phone while heading to the front door, still in my pajamas, to get to the school. “Are you okay? Is everyone okay?” I asked my son, trying not to shout into the phone.

“I forgot my concert dress clothes, and we have an orchestra performance today,” my 8th grader explained.

The keys were already in my hand, to get to the school. I started crying with relief and then anger.

“Yeah, sorry, baby. I am. Not your fault. I mean, forgetting your clothes is your fault. But not my crying. Don’t worry about it, okay?”

“Thanks for saving me on this one, Mom.”

“Of course. We all need it sometimes.”

On Thursday, I was solo parenting while my husband was out of town for work. Just before lunch, I got a call from the elementary school. My heart plunged. When I answered it, there was nothing but sobbing on the other end. I couldn’t make out anything except “Mom” and “blood” and “broken.”

“M–!” I tried to interrupt my 10-year-old daughter. “I need to you to take a breath and tell me: Has something bad happened at school? Are other people hurt, too?”

She took one of those quivery breaths you take when you want to cry but have to speak. “I fell from the monkey bars. I can’t find my glasses, and I have a big cut on my head and there is still gravel in my eye and I landed in a puddle of water that was at least six inches deep and now I’m soaking wet–” Her voice rose as she continued her list of injuries. I realized I’d stopped breathing as soon as I’d picked up the phone and let out a huge sigh of relief. Stitches, broken glasses, ruined clothes, a mild concussion–I can work with those.

If you don’t have children, it might be hard to understand what this fear of school is like. The poet Ann E. Wallace, a friend of mine, explains it in Tuck Magazine.:

Each email, each text

and dread, as dear parents hold

their children in their breath and

in the beat of their hearts

This week, we rearranged my older son’s schedule because one of his teachers, who likely conceals and carries, demonstrated that he was untrustworthy to speak respectfully about guns or gun violence. An older white man, he decided, without any preparation, that the students should have a “debate” about gun control. He is known as a bully toward students, selecting one or two in each section to belittle in front of the group. After an incident two years ago in which he used a racial epithet in class (He defended himself by saying that he was showing a film clip with the word in it, so he needed to explain it to the students.), most students just try to stay out of his way.

Can you freely debate gun control in a class in which you have every reason to think your teacher is carrying a gun? Can you lead a group of students, some of whom have direct experience with gun violence, with no preparation or parental heads-up? There are certainly children in that classroom who have seen their mother’s boyfriend pull a gun on her. They have lost loved ones to suicide by gun. They have been trained by their parents to keep their hands visible whenever near a police officer. They have lost loved ones in the Las Vegas shooting or in a hunting accident  or in a convenience stick-up or in a gang-related shooting. They don’t need a teacher telling them that when he was a kid, you could store your rifle in your locker so you could go out shooting after school.  That, he says, is the evidence that guns aren’t the problem–kids nowadays are.

And guns don’t need to be locked up, he told them. He just puts his guns up high, so his toddler-aged grandkids can’t reach them.

It would take on, maybe two, of the larger boys in that class to knock this teacher over and take his gun. That’s it.

It can be hard to unravel cause and effect, but people who are police officers are often violent in their personal lives. Research indicates that more than 40% of police officer families experience domestic violence–much more than the general population. It could be that people prone toward violence seek careers in policing, and it could be that police work contributes to interpersonal violence.

In any case, do we want to make teaching a career that is attractive to people who want to work with guns?

We also removed my daughter from DARE this week. After the first week of DARE, I let the teacher know I didn’t think it was a good fit for M–. I tried to be diplomatic. Given the officer’s disparaging remarks about immigrants (which sparked their first conflict), his declaration that Donald Trump is a terrific president (their second), and his demands that the children respect his inherent authority as a police officer (their third, in the same day), I suggested that she might be too distracted by the poor relationship they’d already established to learn much, which means she was more likely going to be distracting other kids. (Subtext: This is only going to get worse. Do you want her radicalizing the other 5th graders?) We agreed to try again.

But she is distracted by his gun.

“What if another kid grabs it? L– is kind of a jerk. I could see him trying to do that.” She has started thinking of her classmates as future criminals. “Not to hurt anyone, but just to be funny.” She thinks for a moment. “Though I’m not sure about the kids in Mrs. S–‘s class. There are some kinds in their with Oppositional Defiance Disorder.” Oh, great, I think, she’s started profiling based on special ed labels. I worry about her ability to empathize being undermined.

She is not wrong to be concerned. Officers in schools discharge their weapons by accident sometimes. There is no reason to think her DARE officer is better trained or smarter or more in control of his weapon than those other officers–including two who did so just last week.

I will pick her up early today, so she can avoid the program. 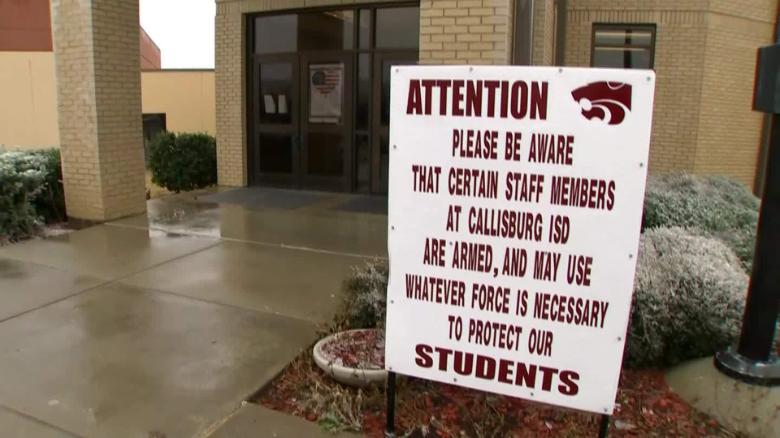 A sign outside a Texas school warns intruders that staff may be armed and “may use whatever force is necessary to protect our students.” An armed teacher policy signals to students that facts and statistics about gun safety (like the fact that you are at increased danger if a gun is near you) are irrelevant and that decision-making does not need to be informed by data. It also lets them know that they are seeking to hurt others, they don’t need to sneak guns in–they just have to grab them once they get there.

While it is true schools are relatively rare, I find little comfort in the claim that “[s]chools are just about the safest place in the world for kids to be,” as Garen Wintemute, an emergency room physician who works with on gun research at, UC Davis says. That just tells us how ubiquitous guns are everywhere else.

Children should be safe from guns everywhere. At a minimum, those of us who wish to reduce our risk of death by gun should be able to do so by choosing not to be around guns. As a parent, I already do a lot to protect them from the risks of gun violence, including not allowing them into homes where guns are unsecured and not engaging in-person with anyone I know or suspect to be concealing and carrying.  Yes, that hurts some people’s feelings. I’m happy to do it in exchange for a lessened chance of my child being hurt by a gun.

My child isn’t more likely to be killed by a gun in the home than at school because a gun never enters our home. My child is not more likely to be killed by a friend with a gun because they are not permitted to be friends with people whose parents own unsecured guns. I recognize that, as a white person of relative means, I have a lot of power to keep my child safe, power that not every parent gets to exercise.

And yet, every day, the state of Utah asks me to send my children into a classroom where there are likely to be guns–and neither the school administrator nor I are permitted to know if a gun is present.

I see this as  fundamental violation of my rights as a parent to keep my child safe. Children are endangered when guns enter the scene, and yet I’m unable to prevent guns from being in the place, outside of our home, where they spend the bulk of their day.  It’s frustrating, and it’s increasingly frustrating as gun advocates press for more guns in more places.