Thanks for sharing the Elizabeth Bruening piece from the Washington Post. In it, she argues that many Americans see ourselves as “alone before we are together.” We despise e pluribus unum and imagine that it’s our fellow Americans (citizens or not) who are the ones keeping us from living our best lives and so we resent, degrade, and deport them.  Dangerously, we forget that we depend on each other. Trump may be the perfect example of what happens when we don’t recognize our need for other humans–the very thing that makes us human. He’s lived a lifetime of using up people and discarding them, sure that he doesn’t need them.

Which reminds me of this:

How many times have I wondered if it is really possible to forge links with a mass of people when one has never had strong feelings for anyone, not even one’s own parents: if it is possible to have a collectivity when one has not been deeply loved oneself by individual human creatures.

That’s the Italian Marxist Antonio Gramsci. He was writing in 1926–and not about Trump at all but about himself. He wondered if his own lack of personal connection hadn’t “had some effect on my life as a militant,” if it had “not tended to make me sterile and reduce my quality as a revolutionary by making everything a matter of pure intellect, of pure mathematical calculation.” 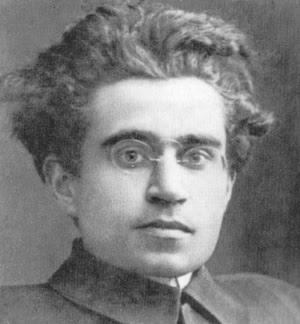 Above, Gramsci, the template for every crush I’ve ever had.

I suspect that if Gramsci was asking the question, then he had enough sensitivity to know the answer. Trump doesn’t, of course, and it’s a personal tragedy with international consequences.