When the First and Second Amendments Come into Conflict, Who Decides?

It’s about time to head back to teaching, which gets my mind thinking about some of my favorite things–Post-It Notes, highlighters, pens–and also some of my least favorite–guns on campus.

The 5th Circuit Court of Appeals has before it a suit brought by University of Texas faculty members who oppose a state law that prohibits them from prohibiting guns in their classroom. The case was dismissed in the lower court by a judge who said that they professors could “present no concrete evidence to substantiate their fears.” In a move frustratingly typical  of its commitment to denying reality, the  NRA took the ruling as an opportunity to accuse professors against “bias” against conceal and carry holders and mock their “irrational fear of guns.”

At the heart of the appeal is the First Amendment claim that guns on campus chill the robust debate of difficult ideas–which is, after all, a key purpose of the institution. We might note, similarly, that this is the purpose of the floor of Congress, and we don’t allow guns there, either. The American Academy of University Professors (AAUP) has joined with other organizations to file a brief arguing that professors will be less likely to challenge students if the threat of guns is present. From the brief:

As the Supreme Court observed sixty years ago, “[i]t is the business of the University to provide that atmosphere which is most conducive to speculation, experiment and creation.” And it is the obligation and right of individual faculty to make pedagogical choices that foster such an environment. … The decision whether to permit or exclude handguns in a given classroom is, at bottom, a decision about educational policy and pedagogical strategy. It predictably affects not only the choice of course materials, but how a professor can and should interact with her students—how far she should press a student or a class to wrestle with unsettling ideas, how trenchantly and forthrightly she can evaluate student work. Permitting handguns in the classroom also affects the extent to which faculty can or should prompt students to challenge each other.

Those forcing guns into classrooms suggest that 18-23 year olds have a better sense of how a classroom should work that professional educators with decades of experience in those spaces. It’s disrespectful. 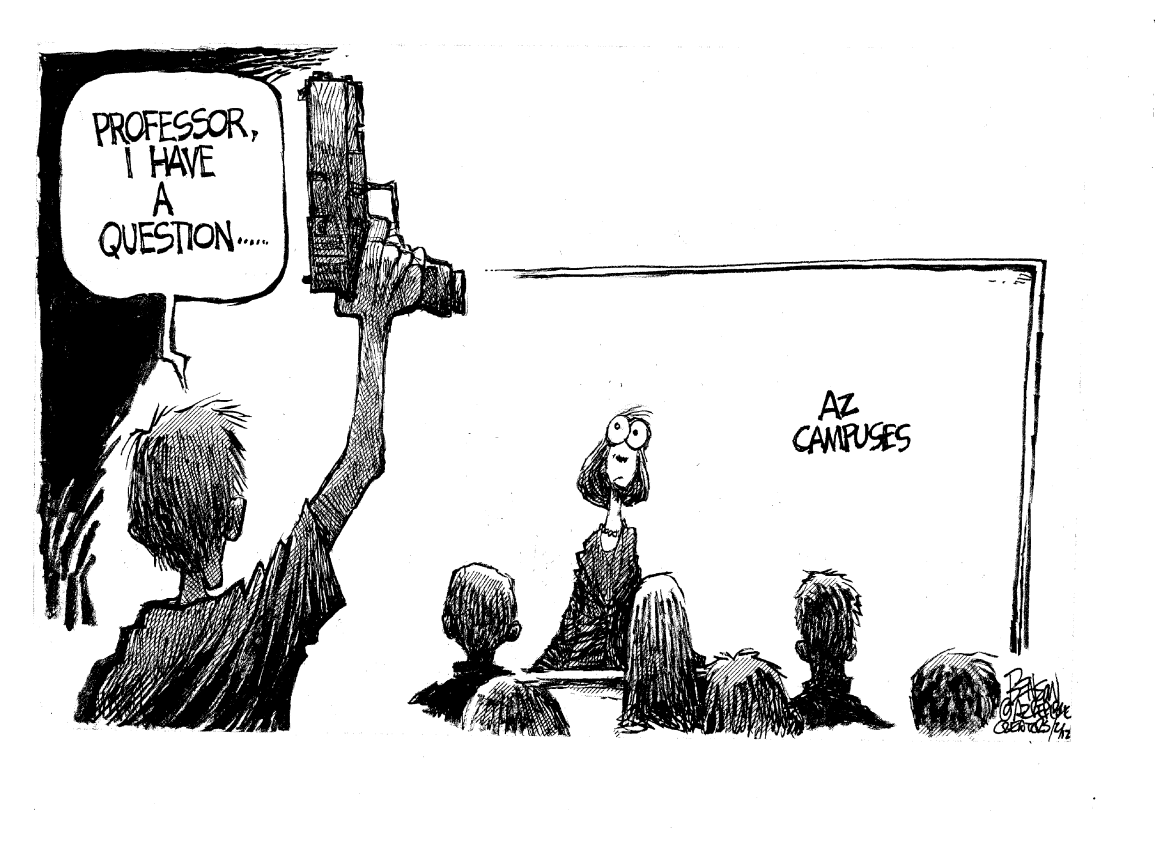 But it’s also disingenuous. When gun fetishists argue that “an armed society is a polite society,” they are arguing that the threat of lethal violence prevents people from engaging in ways that are rude. But rudeness is both in the eye of the beholder AND a First Amendment right. An armed student is not equipped to decide if the behavior of a teacher of classmate is “rude”–but when a teacher faces a classroom of guns, she may treat the student as if he is, out of caution.  For at least some gun owners, the point of a gun is to intimidate and to stifle views they don’t like. Sure, not everyone–but gun permits (in states that require them) don’t discriminate between people carrying because they are fearful and those carrying because they want to shut up those who disagree with them.