DO good Christians own handguns?

Is there a good theological case for the ownership and use of guns by Christians?

We don’t have great data on gun ownership, but perhaps between 1/4 and 1/3 of Americans own guns. However, we own a LOT of guns–almost one per person. And about 3% of people own about 50% of the civilian guns. That tells us a few things: first, that some people own a lot of guns. Second, that lots of us own just one or two. I’ve argued before that that first set of people have something wrong with them. But why do so many other Americans choose to own just a single gun? The answer seems to be “self-defense.”

That’s a lot of people who believe that they have the judgment to decide when someone else should die, the skill to make it happen without killing or injuring someone else in the process, the strength to live with their decision (including the possibility that they made the wrong one), and the ability to keep guns safe when they aren’t being used in self-defense (a near impossibility).

We also have a lot of Christians in the US–about 70% of the overall population.

And, according to Pew, 41% of white evangelicals own a gun–the highest percent of any religious group. Two in five of them own more than five guns. And 57% of white evangelicals who own a gun say it is for protection–more than who say it is for hunting, sports shooting, or their job combined. And 16% of those who own say that they carry their guns on them at all times.

Still, that’s a significant minority of Christians who own handguns out of fear for their safety and the mistaken belief that guns make them safer. Theologically, I don’t see a case for it, and I do see a significant argument against it, the key point being: If the heart of discipleship is trusting God for our daily bread (that is, not worrying about tomorrow but keeping our focus on the work of today and relying on God to provide for tomorrow, just as the birds of the air are provided for), then we cannot put our trust for our own safety in a gun. 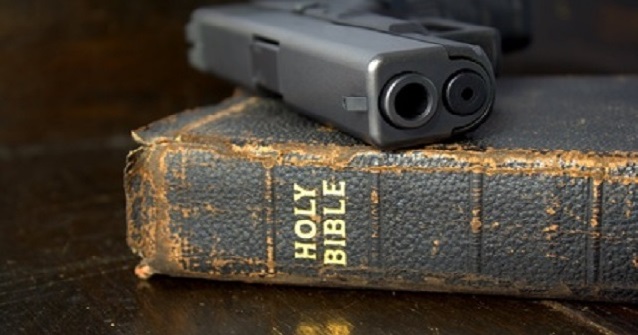 But to answer the question without going to theology: Do you know good Christians who have handguns?

For my evangelical friends who hear this as a judgy-judgy question (Who am I to decide who is a “good” Christian or a “bad” one?), we can make it simple. I’m not saying we can figure out who God loves (everyone is the most generous answer) or who deserves God’s love (no one, if we want to go that way). So, to be clear, we’re not saying whether a person is a Christian (whatever criteria we might argue about there) but whether, by their own standards, their a good one. So it doesn’t matter if you were baptized as a baby or as an adult or not at all or whether that was done by sprinkling or immersion or whether you take your communion at a closed, close, or open table and whether you believe in transubstantiation, consubstantiation, or memorialism. The more important question here is: Have you given away your riches to follow Jesus? Do you care for the widowed, orphaned, hungry, thirsty, ill, cold, and imprisoned? Are you conformed to the things of this world, or do you seek to follow God, who always challenges the ways of the world?

Tall order, I know, but we can see more or less of these things in people’s lives.

When I think about the people I know who love God and love their neighbor as themselves, they don’t own handguns. Those people who generously share their time and resources with others, who protect the weak and vulnerable, and who generally put their money where their mouth is (or, better yet, don’t use their mouths much at all when it comes to religion!), they don’t own guns.

This cuts across political lines. The political conservatives I know who live their faith most faithfully–the ones who serve as overseas missionaries and who have adopted children through the foster care program because of their pro-life stance–they don’t own handguns. I know a lot of Christians and a lot of handgun owners, and the relationship between handgun owning and being a faithful follower of Jesus–the kind willing to lay down their lives to follow him–is inverse in my sample. The top 50 most faithful Christians I know don’t own handguns, and the handgun owners I know tend to be cultural Christians.

According to Pew, American Christians who attend church more regularly are less likely to own a gun than those who attend less often. However, the more religiously committed they say they are, the more likely they are to own a gun, carry it with them, say that they carry it for protection, identify the right to gun ownership as essential to freedom, and believe that more people should own guns and that gun owners should be allowed to carry guns in more places.

I think this is part of the larger picture of white evangelicals: people who do not attend church but who have a deep sense of themselves as Christians and whose anger and fear that they might lose out on the good stuff of life justifies lethal violence. It’s the cause of war, racism, and Trump voting. And it’s endemic, I fear, to much of white evangelicalism.  Guns are just one symptom.