Good news: that racist graffiti I wrote about last week at K-State? Looks like it didn’t happen. Or, rather, a young black man’s car was graffitied with racist language, but it appears that he did it himself as part of a Halloween prank that got out of hand.

It’s not the first time this kind of situation has happened. Within the last two weeks, an African American man was arrested for spray painting racist graffiti on Eastern Michigan University’s campus. Last year, a black man who was a member of Hopewell Missionary Baptist Church in Greenville, Mississippi, spray painted “Support Trump” on the church before setting it ablaze. And arsons at black churches in St. Louis in 2015 were attributed to an African American man. 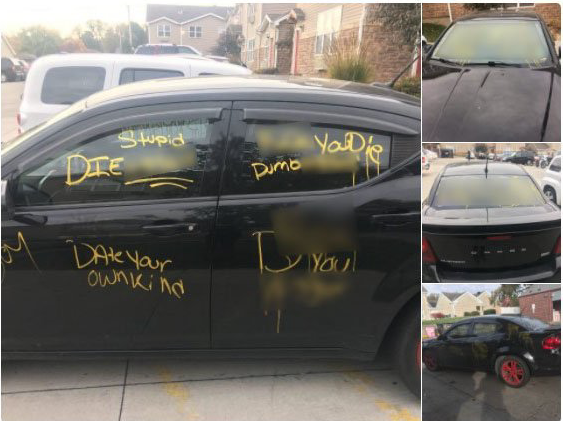 Above, racist graffiti a young man in Manhattan, Kansas, spray painted on his own car.

Right-wing media loves these stories. They seem to prove white innocence and make a mockery of those white people who work for social justice. What a bunch of fools! They call for a genteel kind of “racial realism”–black people (or immigrants or Jews or Muslims or queer people or women) pretend to be victims, but it’s all just a ploy. Every apparent hate crime looks like it was probably committed “people on the other side,” as Trump said about the desecration of Jewish sacred spaces during and since his election.

But I also don’t occupy their bodies. I don’t know what it’s like to be in a population that is likely to be targeted for hate crime. As a white person, racism only ever benefits me. I don’t have to worry about how to withstand it or how to teach my children not to internalize racism, homophobia, or anti-Semitism. I’m not asked to renounce white people or made to feel required to express embarrassment when white people commit crimes against other white people. (Though, as a woman, I am always told to doubt my own interpretation of assaults on my body and my dignity. I must have heard wrong. I must have felt something that didn’t happen. It must have meant something else than what I thought it meant. If I’m not out-and-out lying, then I’m mistaken.)

As a economically privileged person I don’t feel the frustration of people ignoring crimes and other injustices against me or people like me. When I seek recourse through the justice system, I get it. I don’t have to step outside the law to vent my frustrations or get what I deserve because I can do those things safely within the law and still be respected. It’s what everyone deserves, of course, and when we don’t all have it, we can expect hoaxes, as demoralizing as they are, like the one at K-State to happen.